DIM indeed must be the artistic eye of the visitor who can enter any of the larger C.P.R. hotels and fail to appreciate the beautiful decorations and appointments of the interior— features which cause them to rank as the equal of any and the superior to most, similar hostelries on the continent.

Deadened indeed must be the spark of feminism which does not glow with the thought that this royally artistic achievement was accomplished by a woman, for the designing, the entire furnishing and the interior appointments in at least three of the Canadian Pacific hotels—the Frontenac, the Empress and the Royal Alexandra—came under Mrs. Hayter Reed's personal supervision.

There are several successful women decorators throughout Canada: Toronto boasts of three or four, one of whom. I think, achieved a notable reputation for her work in one of the Niagara hotels: Montreal cpuld lay her finger on a few more; Winnipeg is said to have had the first decorator (and a woman) in Canada to introduce black walls and carpets into the Dominion. But their work differs radically from that of Mrs. Reed, in spite of many stories to the contrary.

“Did you ever hear what salary Mrs. Reed receives from the C.P.R.?” I asked the Old Resident, who knows everything about everybody from the Adams family down.

“I hear that Mrs. Hayter Reed gets a salary of ten thousand dollars a year from the C.P.R.,” I said to the very upto-date Gossip, who also knows everything there is to know about people.

“Heavens, my poor dear,” she said. “You are only about ten years behind the times. I know for a fact that today she is paid twenty-five thousand dollars a year, for decorating and furnishing the hotels.”

“Fifteen thousand dollars is quite a substantial increase, and might possibly have been exaggerated, so I tried a gentleman of my acquaintance.

“Well. I have heard,” he told me, guardedly, “that she gets about thirty thousand dollars, besides all sorts of perquisites..

THE TRUTH IS THAT SHE RECEIVES NOTHING!

Chief Justice Armour, whose wife was Miss Eliza Clench, was the father of ten children—five sons and five daughters. The eldest of the daughters was Kate. The family lived in Coburg, Ont., where the early schooling of the children took plaee, and later they wént to Toronto. What can one say about Miss Kate Armour which will not sound fulsome and gushing? Can one say that she was a beautiful girl, her lovely hair being one of her most notably attractive features that her keen wit, her originality made her one of the most popular members of a group pf women renowned to-day in Canadian history? She was the close friend of Mrs. Charles A. E. Harris, in turn a friend of the Baroness Macdonald. of Mrs. William Macdougall, of Madame Girouard, and hosts of others equally prominent. Can one say without being banal that her spontaneous generosity, her goodness of heart enhanced her already attractive personality; they did not cover a multitude of negligible virtues. To say that she was and is ‘good hearted’ is no insult!

The picture of the young student poring over books on art, working in a dusty attic, smeared with paints and crayons, is satisfying, no doubt, but utterly untrue. The bald truth is that she never studied art in the usual .sense. It came naturally, as the salt comes from the ocean. She inherited not only a love of it. but genius for it. A near relative of the Armours was Paul Kane.

In 1880, Miss Kate Armour married Mr. Grosvenor Lowry, a prominent member of the New York bar, and a widower with three children. Upon the death of her husband, Mrs. Lowry rented her handsome New York home and came back to Ottawa, where she frequently met Mr. Reed. A romance which had been nipped in the bud came under the watchful eve of the little lad with the arrows and. finding receptivity for his barbed shafts once more, he saw the affair brought to a happy culmination by a wedding between Mrs. Lowry and Mr. Hayter Reed.

Let it not be understood, however, that her genius had lain dormant all these years. Its scope was more or less confined to her own home, which was as perfect as money and taste could make it. A characteristic story is told of Mrs. Lowry and a “vandal,” who had rented her house partly furnished.

She met a real estate broker, a great friend, one morning and, rushing up to him, said:

“You can sell my house, as soon as possible, and you can take anything you can get for it. I • never want to see it again.” *

“But you have just finished putting such a lot of time and money in its decoration,” protested the astonished friend.

“Exactly! And I have rented it to that French vandal, who has brought a car load of his old French furniture and ruined the atmosphere of my Italian room !”

Mrs. Reed was the first woman in Canada to mother the Antique Shop idea. In Quebec, through her assistance, such a place was opened a good many years ago and she was tireless in her search for the genuine antiques sold there. At first her trips were confined to the Province of Quebec, where rare treasures, both French and English, were unearthed. Then she extended her search throughout the Maritime Provinces with successful results. No benefit accrued to Mrs/ Reed from this venture. It is just mentioned as another of her “good-hearted” deeds, for friendship’s sake.

The decoration of the Chateau Frontenac was her first large and spectacular venture. Naturally, the C.P.R. officials would not allow such a find to rust for lack of use. One may say, she is the busiest woman in the Dominion, always flitting here and there like a brilliant meteor, and leaving a blazing trail.

“Mrs. Reed is coming to-morrow,” one will be told by the clerk in the office, as though one might say: “The King is coming.

“Mrs. Reed has been here,” says the chamber maid on the tenth floor, with all the pride of an intimate friend.

For, beside that rare combination of the artistic and the practical, Mrs. Reed possesses the enviable faculty of “getting on” with every one from the manager of the largest hotel to the most obscure scullery maid. “She hath all the charm of woman and all the breadth of man.”

To quote Paddy, without whose sayings we would be hard pressed at times, “She is gone to-day and here to-morrow.” Here, means a delightful home in St. Andrew’s. Having brought the interior of that home to the highest pitch of artistic perfection, Mrs. Reed has turned her attention to the outside, and her garden is her present hobby.

The collection of china is also an outlet for her energetic spare hours, boots, china boots, being her especial concentration. I would hardly dare to say how many she has. Certainly she could outfit a tribe of centipedes without any difficulty!

Some one has said that wit is the salt of conversation. That being the case, it is extremely difficult to discover anvthing of Mrs. Reed’s which is not soaked in brine. Her bon mots are famous: she has always an answer ready, and her love of truth and frankness detract not As often as not, her jibes are leveled at a whit from the humor of her remarks, herself, as the following story will show: She was invited to one of those crushing gatherings in which a smile is severely criticized and laughter outrageously bad form. The conversation somehow veered to so frivolous a subject as a famous palmist who was creating quito

party acknowledged with frightened looks at their neighbors, that they had consulted this palmist with astounding results. He seemed to know everything.

“Nonsense,” said Mrs. Reed, “the man is a fraud. To prove it, I will tell you what he said to me. He saixl that I was a remarkably virtuous woman!”

No one enjoyed this sally, except the perpetrator of it, whose enjoyment un der the circumstances was a thousand times more keen.

On another occasion, Mrs. Reed was crossing the border and had neglected to open her hand baggage for inspection.

“What is in that bag?” demanded thx* Authoritative Uniform.

“Only clothing? Nothing dutiable“”’ insistexl the officer, suspiciously.

He took the bag and opened it. He thrust in the mighty arm of the Customs and drew triumphantly forth, a bottle of whiskey. 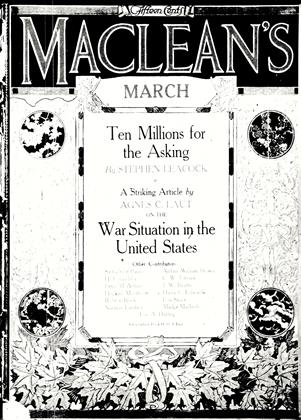