ABOUT ten years ago, at the Central Experimental Farm. Ottawa, a scientific mind applied itself to the production of a grain of wheat which when planted in the rich soil of the Western plains would grow and develop so rapidly that it would mature into a fully ripened crop ten days to two weeks earlier than any other kind of seed. The object which the scientist had in mind in doing this, was to enable the prairie farmer to secure his wheat crop from the ravages of frost, which so often have been felt in the West toward the end of August. Without sacrificing the quality or the quantity of the Western wheat crops but at the same time ensuring an earlier harvest, the scientist finally evolved a variety of grain which since has become widely known as “Marquis.”

Early in the spring of 1911, a small five-pound package of this Marquis wheat was sent from the Central Farm at'Ottawa to an obscure little farm near Rosthern, Saskatchewan. In April of that year it was duly sown, and in the following August, from an area comprising onetwentieth of an acre, a crop of wheat was taken which yielded at the rate of 80 2-3 bushels per acre. In October, at the New York Land Show, a bushel of this same wheat was on exhibition, in competition with bushel lots of wheat from every part of America. It was a world competition, and the specimen from the little farm at Rosthern won the highest honors, which were in the form of a thousand dollars in

cash and a fine silver loving cup. That was the way in which Seager Wheeler, of Rosthern, Saskatchewan, was introduced publicly to the people of Canada. Since 1911 he has exhibited samples of his wheat at International land shows and farming congresses in different parts of the United States and Canada, and three times he has captured the first prize, entitling him to a world reputation as a grower of grain.

In Western Canada, Seager Wheeler is famous from one end of the prairie plains to the other. He is known as the wizard of seedsmen. His ability to select the best kind of grain to plant in the ground each spring has been the secret of his success. He has applied gardening methods to grain-growing on the boundless prairie. In the West, the standard of a man’s success on the land is only too apt to be the number of acres he possesses. But Seager Wheeler brought with him from the old country certain principles of thoroughness in his relationship to the soil which he never forgot even on the prairie where the temptation to deal in wide areas often overcomes any inherent desire to practise agriculture intensively. While others were breaking up vast tracts of prairie and becoming the owners of thousands of acres of partially developed land, he remained content with his homestead, improving it by thirty and forty acres at a time, and finally transforming it into one of the most carefully cultivated farms in Western Canada.

SEAGER WHEELER was born at Ventnor, in the Isle of Wight. He came to Canada in the Spring of 1885, and arrived in the Northwest in time to see something of the Rebellion. He had no capital and very little experience with which to support himself on a prairie farm at that time. The C.P.R. was being built across the plains in 1885, and Seager Wheeler went as far West as he could make his way. He found himself at Moose Jaw in the month of May, and a few months later trekked northward 175 miles to a friend’s farm, near the present City of Saskatoon. There, he learned the stern lessons of a pioneer farmer on the prairie. It was necessary to trail to Moose Jaw every fall and spring for supplies. Speaking of the first crop of wheat he harvested in Canada, Mr. Wheeler said on one occasion, that he and his friend managed to prepare thirty acres for wheat, the seeding of which vu done by throwing the grain broadcast “Farm implements were pretty scarce in those days.” he said. “The grain was sown mostly by hand, and I have seen men harrow it with branches of trees. Needless to say, we did not have big yields in those days.”

After two years of pioneering on his friend’s farm, Seager Wheeler returned to Moose Jaw to work on the new railway. He spent two years with the C.P.R., saved some money, and then left again for the northerly part of the country where he filed on a hojnestead bordering on the banks of the Saskatchewan River. Speaking of his work on this first farm of his own, he records that he did not attempt “to farm large acres.” “I used to pick over my seed by hand,” he said, “in order that all weed seeds and inferior grains should be taken out. 1 wanted to sow the very best grain even in those days.” Finally, after doing well on the homestead located beside the Saskatchewan River, Wheeler decided to move still farther north to a better piece of land, near the town of Rosthern. This was in the late nineties, and he has been in the same place since that time, believing as he has testified many times that his particular soil cannot be beaten for grain growing by any other in America. Some time ago the writer had the privilege of calling upon Seager Wheeler in the middle of the crop season. His snug little farm cottage was nestled in the midst of a grove of trees and shrubbery, which spoke eloquently for the first work which the little Englishman did upon locating near Rosthern. He had planted hedges of Southernwood, Caragana, maples, Russian poplar and willows. At the time of the Queen Victoria Jubilee, Lady Aberdeen sent out to the settlers in the West, small packets of lilac seed obtained from the grounds of the Government House at Ottawa. Wheeler had received a packet, and had carefully planted the seeda Today, the healthy, vigorous bushes that have sprung from those seeds, bloom

luxuriantly and add a touch of beauty to that well cultivated little farm at Rosthern which could not be equalled by acres of golden wheat.

“It was always my object.” he told me. “to do things thoroughly on the farm, as far as I wa9 able. I am a book farmer and an indóor farmer as well. We often hear uncomplimentary things about such men, but show me the farmer who does not read and I will show 'you a poor farmer. Problems are worked out in the arm chair by the fire as well as observing outside during the daytime.” This man also said that he was a subscriber to one daily, three weekly and five farm papers. A strict devotion to the details of agriculture, working out little, knotty problems at night-time with pencil and paper and above all being particular about the quality of the seed he plants each year, have contributed to the success and marked achievements of Seager Wheeler. For instance, the bushel of wheat which took the first prize at the New York Land Show was practically hand picked and thoroughly cleaned. “It was cleaned,” he said, “in the? same manner as I clean my own grain every year for seed purposes. There were no broken grains in it. no im-

mature grains, no useless immaturities and no smut. It is just this giving attention to small details that counts.”

SEAGER WHEELER was simply one of the many “green Englishmen” who have been seen in all parts of this new country during the past twenty years. But if he was green at one time, he was never careless. Probably there is ne other one grain grower living in the Middle West who has done as much to add"to the sum total of Canada’s wealth as Seager Wheeler of Rosthern, Saskatchewan. His crops are not now grown for the grain exchange. They are produced for other fanners to {riant. His seed has been sought and secured from all districta of the West. His crops have in this way increased a million fold. Dr; Charles Saunders, in the laboratories at the Central Experimental Farm at Ottawa, discovered the early Marquis wheat for the prairie farmer. It was Seager Wheeler, however, who cast this seed into the ground and saw it bring forth much fruit. He demonstrated its practical qualities, and incidentally brought great credit and international fame to his country and himself through his work. 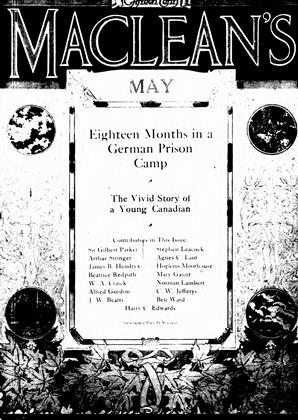