A Brave Woman of the North George Armstrong July 1 1917

THIS war has brought out so many heroes and heroines, and exalted conduct has become so much more the rule than the exception, that it excites little comment or surprise to find women accompanying great and unusual tasks, and the story of the splendid work accomplished throughout Canada by the Daughters of the Empire is too well known to require repetition. But it may interest and stimulate the readers of MACLEAN’S to learn what one woman with few resources and under adverse circumstances, but filled with courage and singleness of purpose, has done.

The beginning of the war found White Horse, Yukon Territory, a little hamlet of four hundred men, women and children, surrounded by half a dozen slightly developed mining properties with less than two hundred miners employed, and our nearest neighbor of any consequence on the Canadian side of the line, Dawson, three hundred miles away. No persons of wealth or influence lived in the district, which depends for a livelihood upon transient travel and trans-shipment of freight to the Klondyke, and upon the aforementioned copper mines as yet in their infancy. But the women of this far northern outpost felt that they must do their share towards the preservation of the Empire that guaranteed the right of unmolested peace, liberty and the pursuit of happiness even away up here-under the Polar star. A chapter of the I.O.D.E. was formed, and all of our patriotic women vied with each other in their efforts to raise funds, comforts, etc., for our soldier boys and the Belgian children, and it is with no thought or intention of slurring the efforts of these fine women

In the mad rush of ’98, wherever a sick man was found on the Teslin trail a prompt visit from Miss Katherine Ryan might be expected, and no rigors of weather or terrors of the trail prevented her from appearing on the scene, and many a homesick youth dates new courage from her first visit.

Thjs intrepid woman drove her own dog team from Teslin to Atlin through a hundred miles of unbroken wilderness, and within six hours of her arrival appeared at the door of the Atlin hospital with a can of jam and several other dainties in her arms. The entire camp, includ-

ing the hospital, was at this time without fresh meat, eggs, vegetabfes, canned fruit or canned goods of any kind, and even without sugar or dried fruit—the last refuge of the sick man in the wilderness. Can you wonder that to these poor frozen patients in this big motherly, blarneying sister of mercy looked like an angel sent from heaven?' And so it has gone from that day to this; never a sick bed or never a funeral without the helping hand of “Aunt Katie,” as she is known throughout the length and breadth of the Southern Yukon.

When the I.O.D.E. was formed, this energetic woman undertook collections from the miners for the Soldiers’ Disablement, the Patriotic, and Red Cross funds, and never a month through summer rains or winter snows, on drifted trails at forty below zero, but what Aunt Katie and her dog team visited the mines, and through her unaided efforts more . than ten thousand dollars have been added to the cause. No person w’as overlooked Qnd no means of raising a dollar was allowed to pass by. No matter what effort or inconvenience had to be endured. Aunt Katie met the call. Her house was turned into a salesroom where useless and castoff things, “rustled” from every possible source, were sold to the Indians, adding another clear five hundred dollars to feed the hungry Belgian children.

And this has been the work of one lone woman, without any supporting male relatives, who earns her own living and supports three orphan nephews, cooking, waehing, darning and sewing for these three growing lads, who are bundled off r to school with unfailing regularity.

“May her tribe increase." 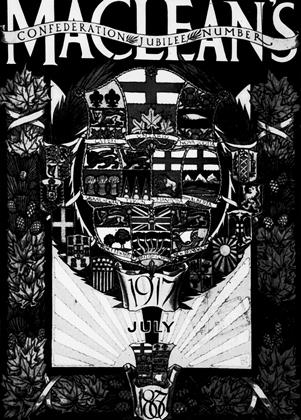