A Canadian Who Speaks Out Beatrice Redpath August 1 1917

HE entire assembly went wild over the impassioned oratory of the Rev. Chas. A. Eaton, of the Madison Ave. Baptist Church, who took the bull of Peace-at-any-price Neutrality by the horns and branded him with red hot irons.”

In the days before Uncle Sam lined himself up with the Allied cause, it was customary to find phrases such as the above in New York papers; for Dr. Eaton, Canadian-born and fiery in his denunciation of Teutonic tendencies, was one of the most outspoken men in the domain of the Eagle. Always a well-known figure in New York through the power of his pulpit oratory, Dr. Eaton’s advocacy of war made him a marked .figure. He lived in a storm centre of debate.

Dr. Eaton was born in Nova Scotia. The old Eaton homestead is in Massachusetts and there have been Eatons living there as far back as 1640, but the father of Dr. Eaton came from Massachusetts to take possession of the land of the expelled Accdians. His boyhood was not by any means one which was simply given over to pleasure. His father having lost a great deal of money he commenced his struggle with life at an early age. At fourteen he was driving a dray, later he even shovelled gravel on a railroad; in fact he did any and every kind of work that he could obtain.

He prepared for college in the Academy at Amherst. At that time he intended to be a lawyer, so he entered the office of the Attorney-General for Canada, but changed his mind and decided to enter the ministry instead.

WHILE at college, through which he worked his way, and during his freshman year he. was asked to preach at a little church close to the college which promised him the munificent sum of two dollars and a half a sermon. In his first sermon Dr. Eaton felt that he had so much to say and he became so eloquent that he pronounced all of his

lowing Sunday he found himself without an idea to express when he ascended the pulpit. Consequently the church members sent down to the college to complain that he couldn’t preach and would they send someone else to take his place?

“So,” laughs Dr. Eaton in relating this story, “so I lost my first appointment.”

When he was twenty-seven he became pastor of the Bloor Street Baptist Church, Toronto, where he had quite a remarkable pastorate. At this time he

Globe, working on the editorial staff. At one time he went abroad as a special correspondent for the Globe. Dr. Eaton was oftei i urged to enter politics, being fame i as an eloquent speaker, but he never hesitated in following thb way that he had chosen. [ •

Later he went to Cle Ireland where he was pastor of the t; hard« that John D. Rockefeller 1: as attended since a boy of fourte« n. He had an enormous and wealth y congregation here and was I sown throughout Cleveland espt; ctally as the newsboys’ pastor. Dr. Eaton will tell how the newsboys would conflict among them elves to be the one to supply him with papers, refusing to be paid.

From Cleveland he went tolNi.. York where he has become ajpablic favorite and more pi perhaps than any other preacher of the gospel.

BOUT a year ago Dr. felt under obligation to some contribution to the spii awakening that had grown ot the war and some discussion ai in the church concerning his oi ions on this subject. He promi resigned,, but the cburch imrnf ately called a meeting and out of office all those who objt; to his public activities, reft to accept his resignation and ing him absolute freedom to press his ideas.

Dr. Eaton is intensely radi and democratic and broadly dares that there is no aí save that of brain and chai For fifteen years he has associated with perhaps the ru and most influential men in the world he is noted for never having hesitated express his views.

As President of the Canadian Socie y he has accomplished much in the way t; if interpreting Canada to the United State i. Dr. Eaton believes that the future of ti e Empire and the United States is one an 1 that their destiny lies together. Cañad i he thinks will be the bond of reconcilia -tion between the Emnir* ««A * 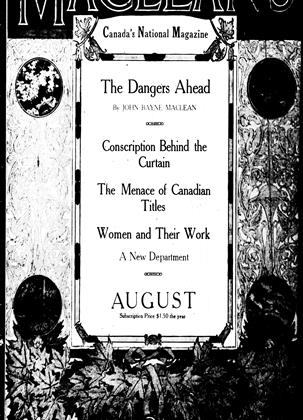