“FIGURES and facts stand ready to prove that millions of dollars could be saved this year if each consumer in large and small towns would make his home plot or an adjoining vacant lot into a family garden.”

We had heard this and it hadn’t impressed us much. We had always bought whatever vegetables we wanted in addition to what we grew in a plot about twenty feet square in a corner of the back yard, and we had never considered the expenditure serious. As for what it would mean in actual food conservation it didn’t seem as though the growing of green garden stuff would go far to relieve the hunger of the fighting men or the starving people in France and Belgium. Even for ourselves at home we had never thought of vegetables, barring potatoes, of course, as being of any use except to give a little variety to the billof-fare when they first came into season, so no wonder we had found our own little patch and the corner grocery sufficient for our needs. Last year, however, we made some discoveries. We heard specialists explain with apparent authority how materially the Empire could be helped by every man farming his own backyard and as much additional land as possible, and we wanted to do our bit. We

expected it would be an expensive venture, but we were prepared for that; even if the fertilizer should cost more than the crop would be worth we had not forgotten the predicament of Midas with his baked potato; we might want food more than money before we saw the winter through.

And the specialist made it plain that a family could live pretty largely from a garden during the summer. In several countries they do it the year round, but their gardens are not limited to mere condimental plants like onions and leeks and radishes. They seem to have an instinctive understanding of the chemical make-up of the edible part of every vegetable, which is only a natural thing after all. If we eat the seed of a plant, ás in the case of beans or peas or corn, we get the part where the nutriment is stored ready to feed the young plant until it is old enough to take food from the soil itself. The legumes, beans and peas, go a step farther than this since they have the faculty of taking from the air the nitrogen or essential building element, leaving part of it in the ground to enrich the soil and storing the rest within themselves. This means that even in the green beans and peas we get a small amount of protein or building food while the dried seeds can be classed as real substitutes for meat. The roots of vegetables like beets, carrots, parsnips and salsify or vegetable oyster are the plants’ storing-places for starch and sugar so (although their nutriment is in a comparatively diluted form) they can be taken as real savers of wheat, as well as carriers of iron and other health-preserving minerals. In the green vegetables or plants where the leaves and parts above gTound are eaten, the mineral salts and acids are, of course, the most valuable constituent, but experience has taught us that while lettuce and onions and spinach and asparagus and Swiss chard and the dozen other varieties of succulent food plants now making up a good Canadian garden may not contain much actual nutriment themselves, they keep the system in condition to get the complete benefit from other staple foods, and their tonic quality goes to make up a very passable bill-of-fare with other less appetizing but more nutritious foods.

Taking these facts into consideration we planned to have a garden with a good variety of vegetables. This is where the beginner has to be careful; we realized that we were beginners, but we had at least the advantage of some ef our neighbors’ experience. We had seen little backyard patches about the size of a sun-dial

containing three or four of everything from parsley sprigs to cabbages and scarcely enough of anything to make one meal during the season; and we had also seen acres of war gardens with rows upon rows of lettuce and radishes and spinach and cress going to waste without even being picked, while the people who planted them would be buying potatoes before the middle of the winter. We decided to plant no more of the perishable things than we could use or give away or save by canning. and to plant as much as we could possibly take care of, of the winter vegetables—potatoes and parsnips and beets and carrots and salsify and white beans for drying, all of which could be easily stored. We also wanted a surplus of green peas and sweet corn for canning and drying, and enough tomatoes and cucumbers and string beans and asparagus and cauliflower and spinach and Swiss chard to keep the table supplied throughout their seasons with a few extra quarts to be canned each week and put away for a winter delicacy.

Of course, our regular little back 3rd space would not begin to furnish room for all this, besides we belonged to the “War Production Club” of the town and had already rented a quarter-acre plot of new land along the river flats, which, it was prophesied, would bring forth an increase like the fertile banks of the Nile. This, it would seem, should be enough to satisfy most people, but the garden fever possessed us and we argued, logically enough, that since the war plots were nearly a mile from home it might be a matter of considerable convenience to have a few vegetables growing at the back door as well, and if we could cultivate an extra quarter-acre away from home we would surely dig up a few more feet of earth right at our door and have a garden of some little consequence right under our eyes — and the eyes of our neighbors. So we enlarged our back yard patch from twenty feet square to thirty by forty feet, and laid it out for more intensive planting than we had ever done before. When we came to the first dry spell of the summer we learned that the advantage of close planting is not only that you get more on a given area, but the plants shade the soil and help to keep it moist, a very important point in most places. We used a little more fertilizer on account of the extra demands on the soil, but the extra yield more than repaid us for that.

The two-garden arrangement proved to be an ideal plan, since we hadn’t enough ground, for a large garden convenient to the house. In the home garden we grew a little of everything that should be used perfectly fresh, and we tried to get enough of the things we particularly liked, and not too much of the things we didn’t care so much about. This is one advantage of planning your own garden —you can make it to suit your own needs, and our plan is shown here not as a model but as an example of one way of planning a garden. We also kept in the home patch the quick-growing things which do not require a whole season to mature, and which must be planted two or more times in order to have them through the whole season. The war plot was left for potatoes, beans, onions, parsnips, beets, cauliflower, cabbage, turnips, squashes, tomatoes and other vegetables which require the ground for a whole season and which we wanted in rather large quantities to store for winter, to can, or to sell or give away. We found that the most profitable

However, we were not growing vegetables to sell; as everyone else seemed to be gardening, too, it looked as though the market might be very dull. Neither did we keep a sufficiently accurate account of our expenditures for seeds, tools, fertilizers bug-destroyerá and other sundry necessaries, or of our returns in the shape of a harvested crop, to say just how the venture has placed us financially. We only know that we will have potatoes to last at least until our own bloom again next year that we are still burrowing in boxes of sand for our own carrots and parsnips and vegetable oysters, that we can have Boston baked beans for Saturday night supper each week. 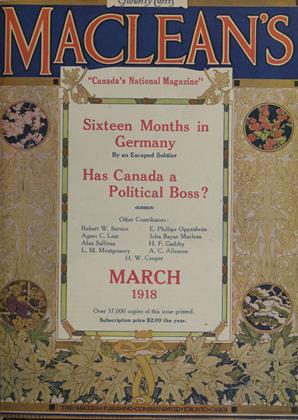