The Creed of a Working Woman ETHEL M. CHAPMAN April 1 1918

YOU will be called upon to be patient more often than to be brave — to do the commonplace thing ore often than the spectacular. When e war set women all over the world tting into uniform for one line of rvice or another, when it gathered em into meetings to discuss national roblems, when governments called them the capitals for advice, the casual server remarked that woman was ming into her own; that her chrysalis d reached the stage of its unfolding d she would emerge from its confines Se to try her wings in the sun.

What the casual observer saw was Iy the' froth arising from a strong dercurrent. The uniforms and platrms bore evidence of what a few unen were thinking and doing but fey told nothing of the quiet, steady rvice of the great mass of women lose work came within the confines of uniform, nor allowed a respite to tend many conferences—women in eir homes, in professions, women who ire busy keeping the wheels of the ition’s industries turning just as they d done before the war only working rder because there was less money d more of the work that men had had leave. Even among the most enthusitice “joiners” a more sober spirit is owing. The °drl who strutted around th her hands shoved deep in the pock¡ of her khaki trousers has forgotten ¡W that there is anything unique in her pearance; she only knows that she uldn’t work so fast or safely or tiresly in a skirt. The new things have ¡t their novelty and the women who ally want to serve are getting down such unpicturesque things as scrimpS along so they can save a little more mey to lend to the country; putting liner fare on their tables that thev iy help to stave off starvation for the iny and the nation; going out in the n and rain to help in the toil of the Id; if they can’t do that, taking care ! their homes . themselves and using tie of the unnecessaries requiring >or, that others may be released for i work of production; or where their lining has placed them in the business nrofessional life of the country, simnworking harder to meet the new, iditions of labor and the world’s need. When the powers in charge invested men with the responsibility of makinpî world’s food go around they followed î well-proved precedent of starting a impaign,” and attempted to give a

little picturesqueness to a commonplace matter by window-cards and illustrated posters. Across the line they even invented a uniform for the “kitchen soldier,” a sort of Hooverall some woman has called it. Undoubtedly all this gave an impetus to the movement, but the window-card canvass is about over and the uniform is after all not very much different from any other big pinafore, and food conservation is a monotonous task at the best—just as often happens, it is the most valuable line of service a woman can give just now. It is work which requires actual personal inconvenience and sacrifice. Other calls we have answered by deputy; we gave “our” men and suffered in sympathy but not the actual hardships and horrors of their experience; we gave “our” money, but why not? It was the easiest way in the world to secure some peace of mind in the thought that we were discharging, in some degree, our share of the obligation; where it was only a loan it was even a good investment. The call to save food, we cannot answer by deputy; it confronts us personally three times a dav, and it takes courage to set out the plainer, and what seems to our pampered families and guests almost meagre, fare, especially if we have the money to buy the things we considered necessary in more prodigal times. Still, the woman who cares is doing it.

Then there is the question of production. Our college girls and business girls with their uniforms and badges are doing excellent work on farms. The girls and women who live on farms do not wear badges or uniforms but in the ranks of productive woman-labor they stand first. Last Spring a bride went to her new home on a farm. Immediately after, her husband’s hired man was drafted and they couldn’t get another, and the young woman like most of her women neighbors went into the fields. She said “I didn’t want to go out this year; there was so much I had planned to do in the house. Besides I had never done outside work and while I had had considerable experience with driving horses I thought those big horses would kill me.”

These people are well-to-do; they could live comfortably by cultivating a part of their farm and letting the rest go to pasture, but they know the world’s need—they have been told of that until they begin to wonder innocently why no drastic measures are being taken to

meet the need—why labor and machinery are not being conscripted from less necessary fields to the work of food production. In the meantime the seed should be in the ground and there is no time even for agitation so the women go on—unspectacular work, sometimes the hardest kind of drudgery, and as often as not the woman’s strength coming to the breaking point because she is trying to do not only a man’s work, but to crowd in a woman’s work with it after hours.

And what are other women, apart from those who are actually producers themselves, doing to relieve this ? There are a few women who have always had someone to polish their floors and wash their clothes and do sundry other chores around their homes who have now found that they can do more of this work for themselves and so release labor for other fields. There are women who have decided that they can get along without certain luxuries whose manufacture involves the use of valuable material and labor needed for agricultural work. Incidentally this may be the forerunner of a happy solution of the servant problem. The maids we had depended on for Canada are now working in the fields and factories of Europe; they will be needed there for years to come, and maids will be increasingly scarce in Canada. Perhaps we may find the women of fine brains and education turning their splendid ability into the keeping of their own homes, taking a pride in the management of their kitchens, the care of their nurseries, the simple artistic beauty of their homes. It won’t be spectacular work but it will mean a wonderful lot to the coming generations.

And perhaps the most seemingly trivial, as well as the most important, need of the times is the courage to keep right on, however, discouraging the outlook may be. The novelty of Red Cross knitting and sewing died long ago but the need of Red Cross supplies is increasing every day. There is nothing more monotonous than saving money but it is inevitable that there must be more war loans. It must be a hopeless Easter in France with the statues in the churches torn down, and the homes levelled to the cellars, yet the spirit of the French women is undaunted. If the war has robbed them of the dearest things in their lives it has also given to their creeds a spirit which we might well borrow—to work harder, pray longer, and smile more. 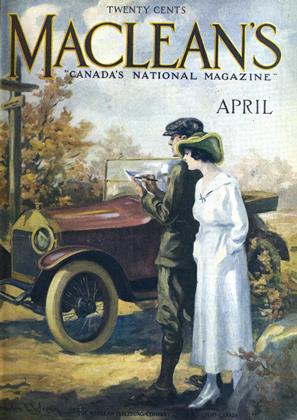