War Developments Do Not Affect Business Conditions. May 1 1918

THERE was a flurry of alarm across the country when the announcement of the placing of embargoes on certain lines of American goods was announced. In business circles the probability of such an order had been well understood. It was referred to in these columns last month, nevertheless the actual announcement created a certain degree of consternation and a hurried scurry to take stock.

It seems reasonably clear that the effect on business generally throughout the country will be good. Individuals will be hit in the readjustment, but in most instances preparedness has served to soften the blow. For instance, the automobile people knew what was coming and the period immediately preceding the appearance of the order was spent in a feverish push to get cars across the line. It is said that one firm turned the complete staff of their Canadian branch on to the work of driving cars over the line. Back and forth they went, driving one car across and then rushing over the line again for another. Whether such methods were actually employed, the fact remains that all the agencies for American-made cars brought in emergency stocks, and the cessation of business for them will be tapered off on that account.

Unquestionably the cutting off of American competition in the lines specified spells a tremendous opportunity for the home manufacturer. Demand will continue as great as ever inasmuch as the people of Canada generally are prosperous as never before, and, having the money to spend, lack the self-restraint to keep from spending. If the home manufacturer can get the materials and the labor to meet the situation, a wonderful opportunity offers for increasing output.

Probably also the embargo order will result in American firms starting branch factories in this country or even incorporating especially to serve Canadian market. It is asserted that many prominent U. S. concerns affected by the order are already considering the step. The Canadian connection is too valuable to lose, even temporarily—for temporary loss sometimes develops into a permanent one.

On the whole it is clear that the effect cn business is more likely to be tonic than harmful and, as the move was made with the full knowledge and consent of our allies no unprofitable effects are to be anticipated. On first thoughts many were inclined to regard the move as a dangerous one, but it is now accepted as being on the whole expedient.

on the prospects of peace. • It is now convincingly apparent that there are no immediate prospects of peace. The German offensive has not disturbed the firm belief in all countries that ultimate victory will be ours—the stock markets, volatile barometers of national hysteria—failed to break when the first smash on the western line came. It has made this truth amazingly clear, however, that the Germans still have the power to fight and the will and determination to keep on.

This steadying down of public sentiment to a still longer prolongation of the struggle has had some effect on business. It is hardly necessary in the face of the gigantic struggle that wages along the Somme to assert that the munitions industry will continue active. Not only does the Hindenburg drive presage a struggle indefinitely prolonged and bitter in an intensified degree but the wastage of ammunition in so titanic a contest must be made good. While no definite assurances come from Ottawa on this score it can be taken for granted that the shell orders will continue to be placed. In view of the awakened earnestness of American effort and the insistent demand that comes from all corners of Uncle Sam’s domain for a “speeding up” effort, it is safe also to assume that war orders will continue to reach us from Washington, perhaps in even larger volume.

The munitions industry has become the pivotal point in business. It is a dynamo which radiates energy in all directions. Canada cannot fail to remain busy and prosperous as long as the necessity for shell making continues.

' I ' HERE has been some slackening up in business generally during the past six months but it has been due very clearly and very exclusively to the fact of limitations. Shortages of materials, scarcity of labor and lack of capital to carry on necessary development and extensions have been factors that have created the degree of slowing up that so far has been apparent. This slowing up process will disappear as these shortages are overcome or become more apparent should the shortages become greater. The probabilities favor the latter eventuality. Now that it has been found necessary to place embargoes on American manufactured goods it is not at all likely that the U. S. Priority Board, hard pressed as it is to find raw materials for all industries, will consent to an increased share coming to Canada. Nor with the seeding season upon us is it likely that the labor situation will become easier. Agriculture will demand more labor than ever before if the greater production plans are to be carried out and it is certain that the demands for ihelp will be insistent and pronounced.

THE financial outlook shows no change. Already there is talk of another Victory loan, and, although it would not under any circumstances be floated until the fall, the effect is a little unsettling. The country has not yet recovered from the magnificent effort of last fall which placed over $400,000,000 at the disposal of the Government for war purposes. Although the response was spontaneous and the total was reached without undue straining, such an amount cannot be raised in a country the size of Canada without curtailing the possibilities of finance in other directions. When the need arises for another loan the response will be just as ready and perhaps even greater but in the meantime money is tight.

Reports from all parts of the country indicate, however, that collections are good. This is the surest test of the soundness of conditions.

EDITOR'S Note.—Since the above review was written it has developed that the announcement of an embargo on American goods x vas premature. Unquestionably the matter was considered and the measure may still he put into effect but so far no definite official action has been taken. It is beliexwd in many quarters that the suggested measure will be abandoned owing to the difficulties which have been seen since the initial announcement was made. Certainly very strong pressxxre has been brought to bear on the Government, by the interests affected and confidence is expressed by some that the matter has been reconsidered. It is not thought that the effect on business generally would be very serious in any event. If xio embargoes are placed busixtess conditions xvill undoubtedly continue at the present pitch of prosperity throughout the summer months. 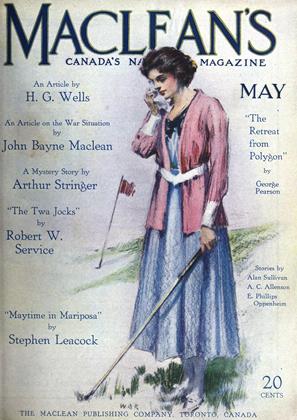