DURING the war there has existed on this continent a clique of anti-British propagandists who have ceaselessly conducted a campaign in the United States to belittle the military, naval and industrial effort of England; to make the world at large believe England has been using the people of other lands as a cat’s-paw while shielding her own sons and daughters and protecting her own material wealth.

Collier’s in a recent issue refutes these calumnies by giving as quoted below various facts and figures which have been supplied by the British Government Bureau of Information:

145.000 officers and men. To-day it has a tonnage (including the auxiliary fleet) of

50.000 men serving in these, and not less than 10,000 in this branch have given their lives for the sake of human liberty. Of Britain’s great army of civilian workers not less than 1,000,000 are exclusively engaged on work for the navy.

There are certain articles which Germany cannot produce or cannot produce in sufficient quantity, and which she is compelled to have in order to continue warfare. The principal items are raw cotton, copper, sugar, wool, hides, meat. Germany’s imports of these indispensables, from 1910 to 1914 (the outbreak of war), averaged as follows:

Up rose the Lion, that fateful August day, 1914, threw back his great head, shaking his tawny mane, and uttered a roar of defiance. And Germany’s importations of the necessities of war, as quoted above, fell with a crash down to nothing at all, excepting for pitiful driblets here and there, smuggled in at long intervals. Also shut off was the supply of rubber, and of coffee which Germany had imported at the rate of 181,000 metric tons per annum.

Unmoved by heedless criticism, by sneers and worse from some who imagined themselves to be masters of military strategy, Great Britain kept armies in Saloniki, Mesopotamia, Palestine—and the unconditional surrender of Bulgaria, with its immeasurable consequences, proves the worth of that “divine folly.” In like manner Britain never, for a single hour, relaxed her sea grip on Germany’s throat. What happened as one result? On a certain October day the German Chancellor cabled President Wilson, virtually admitting that the game was drawing near a close, so far as the Hun was concerned. And the next week came word from Washington that this initial surrender by the Kaiper's Government was due largely to shortage of raw material for ordnance that in a two days’ engagement preceding October 8 about sixty German shells out of each hundred falling in a certain area failed to explode, and merely dropped to the earth as harmless “duds.”

51.000. 000 tons of fuel, including oil. And it has kept the highways of the deep open for British ships which have carried 130,000,000 tons of food and other supplies for use of the Entente Allies and the United States. We, in this country, are justly proud of the valor and skill of our own navy, and of its gloriqus deeds. But we should not forget that of all the Allied forces that have been fighting German submarine pirates in Atlantic waters 80 per cent, are British, 14 per cent, are American, and 6 per cent, are French; while of Allied submarines that have been hunting enemy submarines in those same waters, 78 per cent, are British, 17 per cent. French, and 5 per cent. American.

What has Britain achieved in aerial warfare? In August, 1914, the Lion had

in service 130 aircraft of all types and 900 men. It is not possible to tell exactly how many aircraft Britain now has, or the numbers in its personnel, because loss of aviators and machines is a varying quantity. But some idea may be gained by the official statement that in a single month British airmen dropped 7,886 bombs on the western front, fired 209,000 rounds of ammunition from the air, and took 15,837 photographs from above the earth, all being taken under heavy shell fire. In one week—from August 8 to August 15, 1918—British air forces brought down 339 German machines and dropped 320 tons of explosive bombs on enemy batteries and ammunition dumps. During the night of August 21, alone, British aviators bombed five German towns, dropping 194 tons of bombs. Today Britain maintained the largest air forces of all the Allies. During the night of August 24 two of the Lion’s air squadrons attacked Constantinople; while his air squadrons have taken the lead on the French front, the Italian front, on the Balkan fronts, in Persia, Palestine, and Mesopotamia.

So much, briefly, for what the Lion has done by sea and in air. How about “Britain’s contemptible little army” of whom 100,000 arrived in France by the middle of August, 1914, and coming with all speed at the most critical moment in modern times unquestionably saved France from certain and speedy defeat? When Europe was thrown into convulsion of war, four summers ago, the British army consisted of 250,000 regular troops, 200,000 reserves, and 250,000 partly trained volunteers composed of “Territorials” who since have done such heroic service; in all, a total of 700,000 trained soldiers and partly trained volunteers With these men the Lion had to safeguard his vulnerable isles and his enormous Indian possessions.

It was on August 8. 1914, that Kitchener sent forth his call for the first hundred thousand”— and they volunteered within a fortnight. A month later 175,000 had been enrolled, of whom 30,000 enlisted in a single day. At the end of the war’s first year 2,000,000 had joined the colors; toward the close of May, 1916, King George made public announcement that more than 5,000,000 men (all volunteers) had entered the army and the navy. Yet, instead of diminishing, the stream of British manhood became a veritable flood, so that in August of the present year Lloyd George was able to state that the British Empire had raised for the army and navy a total of more than 8,-

“To-day,” says a statement from the British Government’s Bureau of Information, “every third male of any age in the British Isles is in some war service”—that is to say, one out of every three in a male population which includes men of eighty, ninety, and over, as well as boy babes in arms.

And what has been Britain’s sacrifices in life thus far according to the latest obtainable official figures—which do not include the results of recent furious fighting?

The first expeditionary force called forth by Kitchener, that handful of 100,000 men hastily mobilized and somehow sent across the Channel, was almost annihilated. A single division lost 10,000 men out of 12,000, while out of 400 officers only 50 escaped casualty. By December, 1915, sixteen months after Britain entered the war. British casualties had mounted to practically 78 per cent, of the entire original land forces. An official statement made in London, on August 15, 1918. announced that up to that date

900.000 British soldiers and sailors had suffered death since the war began. More recent losses bring the total of British dead well up above 1.000.000. It must be remembered that British forces have been fighting not only in France, Belgium, Italy. Russia. Siberia, and the Balkans, but also in Kiaochow, New Guinea, Samoa, Mesopotamia. Egypt, the Sudan, Cameroon«, Togoland. East Africa, Southwest Africa. Aden, Persia, and along the northwest frontier of India. It is probable that at no time have more than 1 .-

750.000 British troops actually been engaged on the French front and in lines of communication connected therewith.

As for the fleet, we have the authority of Sir Eric Gcddes, First Lord of the Admiralty, for the remarkable statement, publicly made by him at a recent Pilgrims’ Dinner in New York, that the British navy has lost 230 warships, big and little, and in addition 450 auxiliary ships, such as mine sweepers, etc.

Yet to-day that wonderful fleet is bigger and stronger than ever!

At the same dinner, by the way, the First Lord of the Admiralty also made the unqualified statement that from January 1, 1918, down to date the British forces— military and naval—had sustained 750.000 casualties, which would be, roughly, at the rate of about 83,000 casualties per month; and that this was a larger number than the total casualties suffered during the same period by all the other Allies combined!

Every American who has visited England within the past four years comes back filled with admiration and wonder at the tremendous achievements of British womanhood, and the British Government dispassionately ranks those achievements alongside the deeds of heroic men in the field. It was Lloyd George himself who declared, after the great German offensive: “If it had not been for the splen-

did manner in which the women have come forward .... often in daily danger of their lives. Great Britain and. I believe, all the Allies would have been unable to withstand the enemy attacks of the last few months.”

mated to have cost Great Britain $27,-

'•*000,000,000. Yet the British Government has loaned to its Allies more than $8,160,000,000, while the British public voluntarily subscribed in excess of $8,000,000 for relief iq France, Belgium, Serbia, Italy, Poland, Montenegro, and Russia, besides providing homes in England for half a million destitute refugees. Great Britain has supplied her Allies with enough grain, for example, to make a loaf of bread as high as the Woolworth Building, and as long and deep as the average loaf is in proportion.

If the American reader wishes a

sharp, clear idea of what Great Britain has suffered in the war, let him remember that, with regard to relative population, the United States would not equal Britain’s sacrifice of life until approximately 2,400,000 American soldiers were dead; until Americans were paying $8,000,000,000 in taxes each year; until 12,000,000 American women were engaged in work formerly performed by men.

New York City has a population about equal to that of London. And from London 1,000,000 men have gone into the British army and navy.

The Lion has suffered deeply; his heart has been sore and torn with anguish.

Generations, perhaps, will pass before Britain’s staggering war indebtedness can be repaid. But the Lion is stronger to-day, more powerful, more determined than ever on the upholding of law, the preservation of order, and the maintenance of international honor. 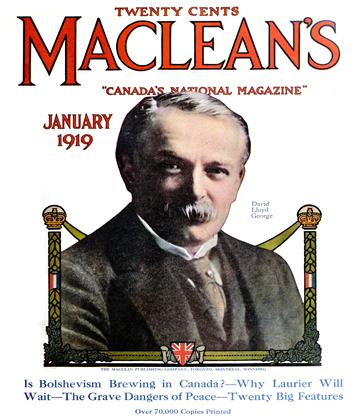