Vice-Chairman of the Board of Commerce

You may think you do, but you don’t. Let me illustrate:

“Supposing there was in your neighborhood a tall brick chimney that had a slant on like the leaning tower of Pisa.

Right in the spot where it was inevitable that the chimney would fall were some very expensive buildings. If you wanted to pull down that tower, where would you start? At the bottom? At the middle? Or at the top?

“At the top of course; you and your neighbors would get together, erect a scaffold, and take it down—brick by brick. That’s the sane way— and the only safe way. Just so, the Cost of Living in Canada must be reduced gradually, brick by brick. One Toronto newspaper reports me as saying the Cost of Living will come down by inches; the expression used was ‘notches.’ That’s the way it will be—notch by notch.”

Never before has there been a Board in Canada with the amazing powers possessed by this Board of Commerce. It is totally independent of the Government, and not controlled in any way by the Government. The Board gets its powers from Parliament, under the Board of Commerce Act. It has the powers of the Dominion Railway Board— and then some!

Commissions are weak, puny, effete affairs compared with this Board over which the Government has appointed Judge Robson to preside. It can issue injunctions for any purpose, and has all the powers of a Superior Court, even to commitment for contempt. Under the Combines and Fair Prices Act it can enlarge the scope of our inquiries to include any article of necessity to the public.

Every day the Board is asked whether it can send the profiteers to jail—and whether it will send them. This Board was not created for that purpose; it is on the job to reduce the costs of certain necessary articles. Of course, the profiteers will be sent to jail if they are caught with the goods,—but that will only be incidental.

Canada Well Ahead of United States

'X'HERE have been some remarks made, in the newspapers and by public men wrho should know better, to the effect that Canada is just tailing along behind the United States in this campaign to cut living costs. There’s not an iota of truth in that!

The other day Mr. O’Connor visited Washington to make certain inquiries. While there he met the Attorney-General, A. Mitchell Palmer, and gave him the outlines of the Act creating this Board.

“And you really have all those powers—powders which might conceivably give you more influence than any court in the land? ” he asked Mr. O’Connor, incredulously.

“We certainly have,” he was assured.

“Well, I must say that I am amazed, and that Canada is certainly showing the way,” he said, perhaps somewhat envyingly.

At this w-riting, the Board is meeting with nothing but hearty co-operation from all classes in its work. Wholesalers, retailers, manufacturers and farmers, have shown no evidence of a desire to thwart action.

What the public wrants is action—and quick action ! They got it in the case of sugar, and before the readers of MACLEAN’S MAGAZINE receive this issue, there may be further action announced along similar lines. The Board has fixed a minimum profit for the retail dealer of one cent a pound on sugar. This does not mean that sugar will sell for the same price all over Canada, because the costs of transportation are being taken into careful consideration. But, no retailer can legally make more than a cent per pound profit.

What will happen if certain concerns decline to sell their sugar? This is a question which has been asked. Just this: The Board will examine into the stocks carried by any such concerns—and make them sell !

What will happen if retailers decline to sell sugar, except with a large or small order for other groceries? The Board has encountered this problem, too. Nothing will happen—except that the offenders will be heavily fined, or sent to jail—or both—as is provided by already existing laws.

Absurd Solutions Offered ‘‘A/TANY absurd solutions of our problem are presented to us almost every day. One of the favorite suggested remedies is that of an embargo. A man came to see me this morning, and said: “I’ll tell you how to bring down prices; stop all food from being exported; stop everything needed in the country from being exported, if necessary.”

“Well, suppose we do;

what will happen?” I asked him.

“Why, prices will drop.”

“Sure they will, and—so —will—your dollar!”

against prices coming down too fast, as is intimated a t the beginning of this article. For, tumbling prices would have a psychological effect on the public, which might cause quicker drops and more vast disaster than any purely economic causes. Psychology plays a big part in this—and in any mass action. Look at what happened in the panics of 1893 and 1917. If* merchandisers saw prices break a little, and then some more, they would get the idea that quick drops were coming, and they would unload as fast as possible. This would cause still more acute breaks, until panic would result. One has to be a student of psychology, as well as economics, finance, and business organization and administration, in order to cope with our problems.

Discussing the probable results of a sudden tumble in prices, and its effect on credit, with a prominent bank credit man recently, this question svas put to him: “Supposing your bank had loans of $1,000 each, to twenty small retailers, all of whom were operating on a narrow margin, both as to profit and working capital ; supposing prices suddenly dropped 15 per cent.; what would you do? Would you call those loans?”

He answered in this fashion :

“We do not believe prices will always remain at their present level; when they’ll drop, we don’t pretend to know. But—we don’t look upon them as normal, or stable, and in making our loans we have made allowances for these contingencies in most cases—and for even more than 15 per cent.”

Many big businesses do not want to see their product sell for more. This may seem queer—but it isn’t even altruistic. Here is an example:

One of the “coal barons” was sitting in his office discussing with his directors various details of his own business. A telegram was brought in, informing him that the price of a certain grade of coal, in which he dealt largely, was being raised quite a bit per ton.

“I don’t see why you should object—except as a philanthropist, and one who wishes his fellow-men well,” said the other, who was a professional man. “Don’t vou see the vicious circle? Our employees

In the December fcwme of M A OLE AN'S will appear the first, instalment of Basil Kinjt’s latest novel. Basil Kinv is one of the ttrentest of Canadian novelists and the author of many best sellers. inchidânK "The City of Comrade»,” "The Hitch Heart.” "The Inner Shrine,” and "The Street Called Straight.”

will see that we are getting more for our coal. They will demand more wages. Our troubles have begun anew. No, I don’t want to see coal prices go any higher.’’

XT/UILE the Board of Commerce was sitting recently * ’ in Toronto, a well-known club-woman asked Mr. O’Connor what attitude would be taken by the Board if a coterie of women should start a boycott. In case prices were maintained at their present levels, or increased, in a certain neighborhood, or certain city, she suggested that “concerted action” might be used with effect to lower prices.

The vice-chairman informed her that boycotts in such cases would not likely be frowned upon by the legal authorities.

“But,” stated Mr. O’Connor emphatically, “there will be no occasion for boycotts, as the Board of Commerce will see that prices are not allowed to remain at an unreasonable level.”

It has been announced that prices on the necessaries of life will not—must not—go higher. A sum of$2,000 has been named as the fine which will be inflicted on any person, or persons, who endeavor to indulge in future profiteering. The milk producers’ organization is the first to dispute the justness of this pronouncement, and at the time this number of MACLEAN’S wont to press were threatening—or promising, if you like it better—to place winter prices in several parts of Canada at a level higher than ever before attained. As Mr. O’Connor says:

“Prices have reached their peak. They should not go higher, and they will not be allowed to go higher. From now on this country should see a steady, gradual drop, though there should be no hesitation in asserting that we will never see pre-war prices again.”

The question of the organization, administration and supei*vision of the cold storage plants in Canada is one which will be probed most thoroughly. Nationalization of all cold storage plants has been suggested on many sides as the panacea for a great many of our ills. Mr. O’Connor's famous report on the packers will make this subject, as well as the control to be exerted in future over the packing industry, of exceptional and vital importance.

The board will make use ot the embargo—as a weapon. In fact it has already used it. A short time ago the whole Canadian West was crying out for sugar, wailing that $1,000,000 worth of fruit would be spoiled if they didn’t get the sugar—and get it quick! Their wail was justified.

A Cabinet Committee met in Ottawa, debated the question, and decided that the only way out of the difficulty was to go into the open market, and buy sugar to ship westward. Then the Board of Commerce having been just created, grappled with the question. It learned that there were several ships in harbor, ready to sail with thousands of tons of sugar, for export from Canada to other countries.

The Board of Commerce proclaimed that no sugar could be exported, pending the appearance before it in Montreal of representatives of certain specified refineries, ‘‘in re certain facts which would be investigated.” The Court sat. The refineries’ representatives appeared.

“What’s this all about?” they inquired, mystified.

(You must remember that demurrage charges at the rate of about $18,000 a day on these boats would soon be piling up.)

The situation was outlined to the refiners. To do them justice, they had already tried to sell this sugar, or much of it, in this country, and had failed because no persons could bí“ found to buy it at the prevailing price, because a drop was being anticipated.

“We’ve got to have 2,000 tons of sugar—and at once,” Judge Robson told them. “This Board will adjourn for half an hour, and perhaps you gentlemen would like to talk the matter over among yourselves.”

The embargo proved a pretty good club, for when the Board resumed its session the refiners announced that they would be able to let the Board have some sugar—yec, just about 2,000 tons could be spared, and at a reasonable price.

“How about the embargo?” asked the refiners’ spokesman. 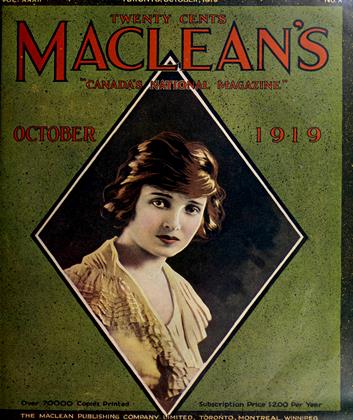