IS the ex-Kaiser haunted by the hereditary ghost of the Hohenzollerns, the “White Woman of Brandenburg?” The rumor has spread through the army that the shade has been seen around Amerongen where the once haughty wearer of the Mailed Fist is hiding. The story, as it is referred to in the New York Sun, is given for what it is worth:

I don’t know whether the interesting story that the ex-Kaiser has escaped the vengeance of the Allies only to find himself hag-ridden by the “White Woman of Brandenburg,” who, you may remember, is the hereditary ghost of the Hohenzollerns, has reached New York yet, but it is common talk among the French soldiers here, particularly among the contingents from the eastern departments. They tell it in the most matter-of-fact way to explain and justify the report that the Kaiser is losing his mind.

“Eh bien!” one old poilu said to me when I told him that the guards had been doubled around the Kaiser’s place of refuge to keep out kidnappers, “but they can not keep out the White Lady of Brandenburg.”

Of course I had heard the story. Everybody has who has read Miss Mühlback. But I asked le vieillard what he meant.

“The White Woman of Brandenburg is after him and will get him,” he said. “If the Allies won’t make him pay for his crimes, she will.”

A few days later I ran across the story from another poilu, who told me that he had heard that the ghost had appeared in broad daylight while his ex-Majesty was chopping wood, scaring Wilhelm out of seven years’ growth.

The story of the White Woman of Brandenburg, or simply “The White Woman,” as she is more often called, is one of the oldest and best known of the countless legends that grew and flourished about the House of Hohenzollern, during the generations it lorded it over Prussia and the Mark of Brandenburg. 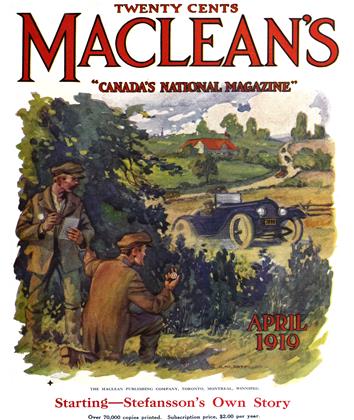