The Man Who Commanded the Guns THOMAS M. FRASER May 1 1919

THE soldier whose friendly face adorns the front cover of MACLEAN’S MAGAZINE this month is, by common consent of all Canadians, what Gilbert called “the very pattern of a modern Major-General”; and the soldiers of Great Britain, France, and Belgium, who more than once had their way made easier for them by the smashing work of Morrison’s big guns, will heartily re-echo the sentiment. MACLEAN’S is rather particular about who shall appear on that front cover. Haig, Foch, Beatty, Currie, Pershing, Lloyd George and Bishop, have all been there—and that is pretty distinguished company; but Major-General E. W. B. Morrison, C.B., C.M.G., D.S.O., Commander of the artillery of the Canadian corps, is fairly entitled on his merits as a soldier and a man to rank with the best.

There have been brilliant feats of arms performed in this war, and great reputations fairly earned, by men who went into it with little military knowledge; but, generally speaking, those who have distinguished themselves in such corps as the artillery or the engineers, where a high degree of technical skill is absolutely necessary, have been men who slogged away at their soldiering during the piping times of peace, w'hen their enthusiasm and devotion was looked on by the populace writh indifference, tolerance, or, sometimes, w'ith contempt. Perhaps Canada hardly realizes even yet wrhat she owes to the men who devoted their leisure and their means to forming the backbone for that army of half a million men who are now every day handing in their weapons anti equipment with the nonchalance of men called on to do a little job, w'ho have done it, and will now' merge their identity with that of other citizens.

Major-General Morrison is fifty-one years old. He was born at Dundas, the son of a Scotchman from

G asgow. He has been soldiering for the greater part of his life, laying down the pen to take up the sword when there seemed to be more need of fighters than writers. He began to learn the rudiments of both writing and fighting in Hamilton a good many years ago, when he was a reporter on the Spectator. Later on he moved to Ottawa, where he became editor of the* Citizen; and, while helping to create or to “scrap” big political guns, kept on assiduously learning all he could about artillery fighting. His genial smile and quiet manner is somewhat disarming; but whether it was pouring hot shot into Grits or Germans, Morrison never willingly passed up a reasonably good opportunity for a scrap.

[HEN the Boer war began, he was editor of the Citizen, and a Captain in the Royal Canadian Artillery. He reverted to Lieutenant to get into the thick of the fighting quickly, and had his wish, in a double sense. At Koomati he did great service with his battery, and, together with four other Canadians, was mentioned in despatches by General Smith-Dorrien, commanding the column. Of the other four, three received the V.C., one the D.S.O. Morrison was passed over, although, as the London Chronicle said, “he had certainly done as much as-anyone else to save an apparently hopeless situation.” But the British War Office was annoyed. Morrison had been writing some very excellent war letters to the Citizen, and one of these, describing the punitive measures taken against

the Boers, had been sent to the New York Sun by its Ottaw'a correspondent, after it had been altered out of all semblance to its true import. The Sun was then as strongly anti-British as it is now' friendly; and this letter w'as used for propagandist purposes against Great Britain, and also made use of by the peace party in England. Lieutenant Morrison found himself very decidedly “in wrong” with the powers that grant decorations—or withhold them. The truth came out eventually, however; the Sun apologized, and, some time later, Morrison got his D.S.O. He was fairly entitled to the V.C., and doubtless would have got it but for the facts above related.

He returned to the Citizen, and remained there until about tw'o years before Armageddon. He kept assiduously on with his artillery w'ork; and in 1912 became Director of Artillery on the headquarters staff. Accompanied by Mrs. Morrison, he traveled all through Germany by special permit from the Kaiser, received through the British War Office, and saw enough of the German defences and preparations to convince him that war was coming soon. The Germans were apparently very friendly, and honored him with guards to meet him everywhere. They expressed great admiration for the work of the Canadians in South Africa, and especially for the Canadian horses. “We w'ould make an exchange with you, Colonel Morrison,” said one German officer of high position. “If you would give us one of the Canadian ponies you used in South Africa, we would give you two of our jumping cavalry horses.”

Ever after the South African war, Morrison believed that there was no soldier on earth like the Canadian; and in an article written in the Citizen after he

northern country, quite without premeditation or obvious object, we have bred up, and are breeding up, soldier material equal to the best the world has ever seen. That sounds like big talk. But wait till the dust of this war clears away, and the days of coolheaded sifting and analysis come. Or, better still—for this was only a curtain raiser—wait till the next big war, when Canada sends a division all her own. Then will be some fighting.”

The Great Work of the Canadian Guns IirHEN the call came in 1914, Morrison volunteered at once; and as Lieutenant-Colonel, took the First Artillery Brigade overseas. He commanded the First Brigade, during the second battle of Ypres, at Festubert, Givenchy, and Ploegsteerte, and was constantly being mentioned in despatches. After a year and a half of this work, he was taken back to England to train the Second Division of Canadian Artillery, and did it in three months, which is about a record for any army. He was promoted to Brigadier-General and went back to France in command of the Second Division. He further rounded them into shape at the Ypres salient, and for the manner in which he led his Division through the Somme offensive he got the C.M.G.

Two years ago he became General Officer Commanding the Canadian Artillery; and at one time this newspaperman, who learned his gunnery after the afternoon edition went to press, had under him, while he was yet only a Brigadier, four full-fledged generals, and directed the operations of British, French, Canadian and Belgian guns. The artillery work of the Canadians at Passchendaele and Vimy Ridge made the whole of the allied armies wonder. After Vimy a French

thing equal to the accuracy of the Canadian artillery firing. They broke the wire at Vimy until there was not enough left to make a bird-cage.” Our infantry always had absolute confidence in the guns clearing the way for them; and have never been backward in expressing their trust and appreciation. The Canadian Artillery in all consisted of 456 guns, with 17,500 officers and men.

Crossing the Rhine on King \1THEN the Canadians went across the ' » Rhine, General Morrison rode on “King,” the blue-ribbon winner he took from Ottawa with him and who has gone all through the war. “King danced all the way across the bridge to Bonn,” he wrote. “The Belgians pinned a decoration on him. . . Though it is announced that all horses will be left behind, I think I will find a way of getting old King back, as there is a strong feeling that officers who have special chargers that have come all through the war will be allowed to take them home.” King behaves like a lamb under shell-fire; but has a rooted aversion to the sight of the smallest piece of paper flying across his path. Rather odd for an old newspaperman’s horse!

What you learn about this sturdy little Canadian fighter, you have to get from his letters, or from Canadians who know him. He has very little to sav about himself, but is always ready to talk about any other Canadian soldier. Writing on the sights in the forward trenches after a big artillery duel, he says: “As I study the psychology of

the Canadian under the strain of this war, there is much of the Red Indian in his cold-blooded courage and philosophic fortitude. They are grim, silent fighters, and they repress their feelings to the point of apparent callousness. There is no fussing over the wounded and dy-

Ing, beyond fixing them up with first aid; and the latter are grimly content to be let alone. If a wounded man is lying under fire and can be got at, an officer or n.c.o. orders the nearest man to bring him in. The man ordered does it as a matter of course, and with about as much theatric emotion as he would evince in doing a chore at home. The j man brought in, unless he is an un| usually polite individual, does not even ¡ say ‘Thank you.’ And the other men in I the trench sit about and look bored.” After relating some deed of bravery on the part of two of bis men, he says: “I

dare not particularly praise them because I am convinced that any other two subs in the brigade would have done just the same. That is a mighty pleasant thing for an O.C. to be able to say, is it not?”

Using the German Guns 'T^HERE are some interesting stories Itold of Morrison’s methods as a fighter. For example, in the months of preparation which preceeded the Canadian attack at Amiens, he obtained models of the enemy’s principal guns, and selected picked men for instruction in handling them. When the attack was launched, these artillerymen went forward with the infantry, and after the guns had been taken, turned them on the retiring foe, and on points ahead, the ranges of which had already been taken and noted. The gunners had even been taught enough German to read the instructions on the guns and ammunition.

General Morrison made an excellent hook out of his experiences in the Boer war (“With the Guns”) and is likely to write a bigger story of this one—a story that will stand out even among the flood of war literature with which the world has been drenched. He has always had the courage of his convictions; and would give a true history, no matter whose corns might be stepped on. 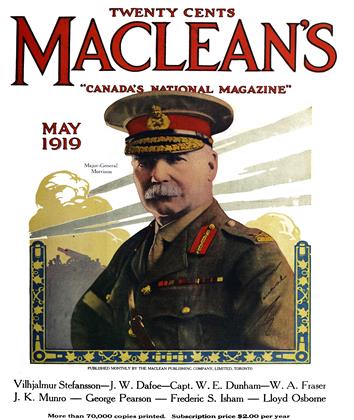