Germany Can Be Prosperous Under the Peace Terms July 1 1919

TWO remarkably interesting and important points are made by Samuel Crowther in the course of an article on “Germany under the Peace Treaty” in World’s Work. The first is that Germany, far from gaining strength since the armistice, has been rapidly running downhill as a result of loss of national spirit The second, and more important one, is that Germany is in a position to actually achieve prosperity under the peace terms imposed. This latter view is so different from the view universally held that the facts from which he draws his conclusions are well worth examination. He writes:

You may say: “What difference does it make what

Germany thinks about the war or the peace? They have to take what is given to them.” It makes all the difference in the world. Germany is not a country that has had prosperity thrown into its lap; what it has it either stole or worked for. and both with equal laboriousness. If they keep to the belief that they were forced into the war and are now being badly used —if they are aggressively impenitent, they will set to with a will and make a new Germany which will be industrially stronger than the old, and they will pay their war claims as a mere incident. They will work for all that is in them and perhaps in another fifty years they will start to recover the territory that they have lost. On the other hand, if they throw up the sponge, they will not pay their war debts and the w'orld will have a problem on its hands.

For the territorially deleted Germany under the Peace Treaty is not industrially weakened, unless all the very valuable coal and iron mines of Upper Silesia are ceded to Poland, and that is impossible of determination from the published summary of the treaty. The country is resigned to the loss of Alsace-Lorraine; the granting of Moresnet, Eupen, and Malmedy to Belgium are matters of no moment and industrial Germany is secretly rather glad to be rid of East and West Prussia with all the crew of farmer-Junkers who by their power in Berlin used to milk the whole population in order that they might collect what amounted to a subsidy on exports of foodstuffs. These feudal barons ruled Germany through the Kaiser, who was one of them, and when they fostered industry it was only as a farmer fattens a hog for the killing. The way of industry in Germany was not wholly strewn with rose petals; it bitterly resented its subordination to the military caste and it did not consider the mailed fist as good business. Neither did it subscribe to the doctrine that business must always be gained at the expense of someone else. That fiction formerly held; but many of the leaders, and particularly Herr Ballin, had before the war reached the same conclusions as the heads of the American trusts —that more profit is to be had by attending to business than by devoting energy to throttling competition. The Kaiser did not understand business at all, but he liked a uniform and loved to think of a kind of uniformed business—a commercial imperialism that connoted the tramp of marching men. The Mittel-Europa idea, the concept of a self-contained Germany and the

dream of world dominion came from the military and never found particular favor with the people of business. As the managing director of a large steel plant at Dusseldorf said to me:

“I cannot say that we like to lose Lorraine, but we shall not lose the ores and neither will they cost us more than before. France does not know how to make steel; they have not the skilled directors and neither have they the proper coke. The mines are of little use without our coke, for coke from England would be too expensive. If France should raise the price of the ore, we would raise the price of coke or buy all our ores from Sweden, Spain or Austria; it would then be France and not Germany that would suffer. The loss of potash in Alsace is somewhat more important, but here again our home supply is quite large enough, and we shall continue to control the price. If restoring Alsace-Lorraine will do anything toward preventing another war, I am glad that it is gone. I am glad, too, to see the end of militarism, and I hope for a compact Germany that can attend to business.

“If the Emperor had carried through his plans, we should have had a vçry great empire that we should not have been able to Änance. If the Peace Conference creates all the small states which they seem to be talking about and arranges for their finance, then we shall have more good customers than we have ever had ; the prosperity of Germany lies in being the England of the Continent—buying raw materials abroad and then selling them in the finished state to the Continent just as England buys her raw materials abroad and sends them out again across the seas as finished materials. A nation which expects to make war should be self-contained, but no nation is or ever can be wholly self-contained, and in peace it helps business and is often cheaper to be able to buy in other countries.”

This is a fairly representative business view—although it is very different from what we imagined the German post-war view would be.

The whole present commercial tendency of Germany is to swing as far in the individualistic direction, through large combinations of capital, as formerly they swung in the direction of governmental centralization. Therefore, although Lorraine and Luxemburg furnished nearly three-quarters of Germany's iron, the men in Westphalia who used that iron view the territorial loss almost without concern. They do not care who rolls the court so long as they are allowed the right to play on it.

And from a strictly commercial basis the suzerainty of France over the Sarre fields for a period of fifteen years is of little importance. The German organization will continue to do the mining and, if the production is on account of the indemnity and is a method of payment, it represents an easy way for Germany. The Lorraine and Prussian portion of the Sarre fields made up only 35,000,000 tons out of a total German production of 210,000,000 tons of coal and 90,000,000 tons of lignite.

But those Germans who treated the loss of Lorraine so lightly were most bitter on the possibility of giving up the Prussian part of the Sarre and it may be that nationalism will override actual commercial values. But the general German commercial opinion, divorced from all nationalism, was that whatever France got in the way of mineral territory would not harm Germany, for they firmly believe that France never permits sentiment to outweigh dollars and that the mines will be worth more and therefore used under German management and selling their product to German furnaces.

Aside from Upper Silesia, the economic straitjacket-

ing of Germany is more apparent than real—excepting the ships and the financial provisions. Putting Kehl and Strassburg into the free port list is of little moment and is, indeed, an aid to Germany with France holding Lorraine. Danzig is of a greater sentimental than actual value. The agreements to supply coal will keep German workers busy and stimulate home trade, the option on German dyes will probably be looked upon as an easy way to dispose of a product about which the chemical engineers were considerably worried in view of the progress in dye making in England and the United States. The fixation of the tariff for a period of years is a political godsend, for the rank and file of the Germans would probably have protested bitterly against a general raising of customs rates and would likely have made it a political issue.

But the real wealth of Germany was not in the coal and iron of Lorraine or of the Sarre, or even in the potash of Alsace. The real wealth was in the transformation of iron, steel, cottons, woollens, silks, and base chemicals into finished articles of consumption ; and the principal places where these transformations took place were Essen, Dusseldorf, Cologne, Duisburg, Barmen, Elberfeld, Solingen, Krefeld, Mannheim, Ludwigshafen, Frankfort-on-Main, and throughout Saxony. These sections have not been touched by war or by peace ; they are ready to function, once they have raw materials—and the will. If Germany elects to put aside her sorrows and will take the country as it is, she will be a stronger and more compact commercial entity than before the war, and is probably facing a period of extraordinary prosperity —provided finances can be straightened out.

For now Germany will be rid of the preponderating influence of the Junkers and will not have to strike a balance betwen industry and agriculture. In its present deleted condition under the Peace Treaty it is wholly an industrial nation.

What is its condition as a going industrial nation? First take its man power and the willingness of that man power to work. The toll of killed and wounded was very large, but nowhere could I discover even a potential shortage of labor. For instance, 10 per cent, of the Hamburg dockers did not come back from the war—about 4,000 were killed or injured to an extent to destroy their working lives. But more than 4,000 of the women who took dock jobs during the war do not want to leave and they will be kept on. The Hamburg losses were especially heavy; men could be spared from there. In the Rhinelands the actual loss among workers is not enough even for the employers to notice—at least so they told me. One does not see many cripples; one-legged or one-armed men seem as rare in a German city as they are common in ¿n English city. But they are there; you may discover that the clerk who attends you has an artificial hand or, if you are sharp-eyed, you will wonder why so often the gait of a man walking seems peculiar. The reason that the cripples are not so apparent is that they have been everywhere fitted with artificial limbs. Although Germany since the Armistice has neglected nearly all the ordinary duties of government, the work of rehabilitation has gone on. Industrial Germany will not be short of men—provided the men will work. Agricultural Germany is very short of man power but it always had to import labor for the harvests and will probably continue doing so.

The almost universal desire is for more work and more food, and the inroads of the Spartacists or Bolsheviki are really negligible. We have more trouble every day in the week in the United States than they have in Germany, and where they use a regiment of troops we would send a dozen policemen. 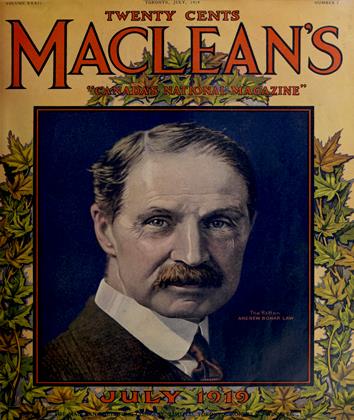