WOMEN AND THEIR, WORK

Click to View Article Pages
WOMEN AND THEIR, WORK

ONE doctor, two nurses, a weighing machine, a chart, packed into the University Settlement motor-bus and driven into one of the least savory of Montreal’s slums on one of the least inviting days of the month! And the secretary of the city’s Baby Welfare Committee tells the story of the visit in the Star. Perhaps if other Canadian cities , were to send medical ambulances into their poor districts, they would find just as startling conditions.

One little mother of nine guards a brood of six, the youngest a baby in arms—her arms! A beautiful, boy of six with large dark eyes stops short when he first catches sight of the magnificent yellow vehicle by the side of the road. He bursts into a wild flood of Yiddish punctuated with gestures of admiration and wonder.

“He say,” giggles a comrade in dirt, “he say—when I beeg man I get one fine beeg motor like dat-a-one ! He fool—reesh, n’est pas?”

The children crowd breathlessly about the yellow car. Cinderella’s coach itself could not excite more interest. They gabble in various tongues. Presently their mothers catch the infection. One by one they emerge from the houses and swarm about the clinic. A ilurse steps down and beckons the nearest woman.

“Have your baby weighed?” she invites. “Come on! It won’t cost you anything.”

With many uncertain giggles a young mother accepts the invitation. Her baby is placed on the weighing machine amid the breathless silences . of the audience. The doctor, the nurses look a little grave as they ■ return the baby.

COMMENT seems superfluous. The baby—like most other slum-babies everywhere on earth—is suffering from malnutrition. On inquiry the doctor finds that it has been fed on condensed milk. He explains the baby’s condition and the proper treatment for it to the mother.—She shrugs her shoulders^ “He's all right!” she says composedly. “Besides—I got anoder coming pretty soon.”

But now several candidates for weighing present themselves—or rather, are presented by their eager guardians. Word has been passed about that medical service will be tendered free. The crowd becomes denser. Interest heightens.

One after another thirty-eight babies are examined and weighed. Of the entire thirty-eight, one only emerges from the transaction with unimpaired credit. One only is healthy and in good condition.

About half the babies suffer from rickets and nearly all from malnutrition. One of six months looks as though it might shortly have a chance of passing through green fields and grass and flowers for the first time—on its way to the cemetery!

The little mother of nine with her brood of six approaches, baby in arms. Her baby, too, must be weighed. Alas! its weight of fourteen pounds matches its age of fourteen months; and examination reveals the sad fact that it is tubercular.

And now a baby is presented for consideration whose tiny face bears traces of suffering. The nurse, half-suspect-

ing the truth, feels the tiny spine— starts—hands the baby to the doctor who takes a blue pencil and traces the spine which curves ominously in answer to his pencil.

“Do you happen to remember if this child has ever had an accident?”

“Oh, yes. He got a tumble when he was around five months—it was nothing!”

And there lies the baby with a serious case of curvature of the spine!

TWENTY out of thirty-eight babies are fed on condensed milk. Doctor and nurses urge the use of pure, fresh milk. The answer is significant. The milk they buy is too bad to give babies— they didn’t like it.

One thinks with sudden interest and anxiety of the proposed city by-law with regard to milk. When will it materialize? Two dead babies in this one street lend point to one’s wonder.

The parents are advised to go to tire nearest milk station and buy pure milk. Some cannot walk so far. Few, if any, can afford ice to keep the milk fresh. We tell them that some good men in the City Hall are trying to have them supplied with ice during the summer months. Their eyes brighten. We als» tell them that we are trying to bring about some arrangement by which pure fresh milk will be within the reuch of all.

It seems little enough that we can tell them or do for them. Pathetic Good Samaritans handing out meagre, supplies of salve and bandages to those who have fallen by the wayside, we wonder inwardly when w'e shall be able to organize a proper police force to restrain the thieves who prey upon the life of the poor—slums, soaring prices and wages insufficient ta meet these prices.

SEVENTEEN hundred dollars is the estimated worth of a human life to its country. I calculate silently that about $129,200 is being squandered in this street alone. No, let us avoid exaggeration! Of the thirty-eight examined, one child was sound; probably one of the next thirty-eight will be healthy also. And several of the rickety, undernourished ones will be of a calibre which will triumph over all obstacles and still live and succeed in spite of everything. So we may safely subtract several thousands from the sum total of one hundred and twenty-nine thousand, two hundred dollars. Still are we not a little wasteful? Even considering the money and the waste of it. The waste of human suffering one hardly cares to dwell upon.

This traveling clinic is merely a makeshift. What is really needed is a first-class, properly equipped medical ambulance which can be used constantly in the service of humanity. A large perfectly-equipped motor ambulance would cost in the neighborhood of two thousand dollars—a little more than the estimated worth of a human life to its country. Truly, “Child conservation is the bargain counter of modern philanthropy.”

And what of the mothers? Do they resent our “interference?” Do they sneer at our advice? Why, ninety-nine out of one hundred are pathetically grateful for our interest and pathetically eager to avail themselves of our information. For the first time, perhaps, in their lives, they begin to suspect that their children do not suffer and die because of some mysterious decree of Providence; for the first time, perhaps, they begin to see the connection between their own ignorance and their children’s fate. 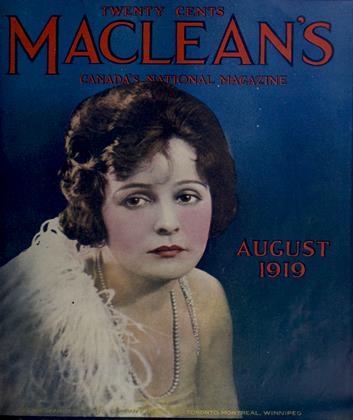