THE terrible events of the last four years have driven into our minds with a logic as inescapable as brutal, that, however confident we may be of peace for the future, it is no longer safe to continue without preparing to defend ourselves against the dangers that undeniably may threaten us as a nation.

Profoundly as we may regret and even bitterly as we may loathe the necessity, it has plainly become the part of common prudence to include in the training of our boys some small measure, at least, of such information and acquirement as will fit them for the defence of their country should the need arise, even though we fervently hope that it never will. The most philosophic course appears to be to admit the necessity and to see how much we ! can save from the wreck. That is to I say, how much war training can be I given which will, at the same time, be i of value in peace and industry if war ¡ should ever come. Looked at from this point of view, the problem becomes a more cheerful one. Indeed, we have some ground for hoping that, especially under the radically changed conditions of modern warfare, we may be able to introduce into the curricula of our schools many subjects and branches which will balance some of its defects and be of fundamental and lasting value to the rising generation.

One obvious and indisputable advantage of the inclusion of military subjects and training in our school curricula would be the correction of the dreadful tendency toward “indoorness” and deskand book-work of our present system. To keep children in a state of muscular suspended animation and mental catalepsy is termed discipline, and the preservation of an appearance of order is rated as one of the highest and most important functions of a teacher. To this desk-paralysis tendency, military training would furnish a valuable antidote. It has its discipline, but it is active instead of passive—harmony in doing something instead of unanimity in doing nothing, an outdoor instead of an indoor drill. If military training were to take the form, say, of half an hour’s marching, countermarching, group skirmishing: half an hour’s shelter-making, trenching, and “digging in”; and half an hour of group calisthenics, either outdoors or in the gymnasium, so as to take the youngsters out of the deadly schoolroom for an hour and a half out of the sacred five or six, it would be a benefit in every way. It would give them no more exercise than they need to keep them in health, it would quicken and sharpen their minds so markedly that they would do even more book-work in the school-day than they did before, and thus, instead of time lost, it would be time gained. Perfectly good military drill and training could be given in marches, hikes, plays, scouting; fortification-building and attacking, scaling and besieging games, which would neither overstrain nor make undue demands upon the immature muscles arid minds of young boys, nor be anything

more than vigorous, wholesome, enjoyable exercises in the open air, physically beneficial from every point of view.

A NOTHER part of the training for ■‘^■modern warfare which would have a valuable corrective effect upon our house-bound system of education is the field and camp side of it. Much as it has changed in some respects, war upon one side is still emphatically woodcraft, hunting, and scouting. The modern soldier must know how to estimate and make a mental map, a naked-eye survey of his country, so as to find his way about in it and take advantage of its natural features for attack or defence, lie must know the capacities and difficulties and advantages of different kinds of country. He must know just where the bad spots in a particular sweep of country will come; just where an enemy could lie in wait; just where a valley could be crossed readily, or would be almost impassable, and what kind of going would probably be found under each particular type of timber. This means that he must, come to know the open country for miles all about his home town and as much farther off as is necessary to give every different variety of lie possible.

This can be acquired only by constant and habitual tramping and hiking and exploring in all sorts of weather, at all seasons of the year, at every hour of the day and night. And if a day or even a day and a half each week of the regular school routine were to be devoted to scouting and camping and sham-battle explorations of this description, it would be time well spent. As a practical basis for the study of geography, agriculture, pioneer history, zoology, botany—indeed, of nearly

everything that goes into school-book's —these exploring and scouting excursions and surveys would be invaluable.

Another point at which intelligent modern military training would greatly strengthen and enrich the present curricula is on the side of hygiene, physiology, and sanitation. The modern army, when in camp, is one of the greatest schools of health in the world. Every man who enters it must not only be physically fit, but must know’ howto keep himself so, how to balance his diet, what dangers to avoid in his drinking-water, how to protect himself from the weather, howto steer clear of risks of infection. It is no longer sufficient for the army doctor and commissariat officer to be informed upon these subjects. They lay down the rules and provide the raw material, so to speak, but the real w-ork of health protection is done by the non-commissioned officers, by the squads detailed for service under them, and by the soldier in the ranks.

T'HE deadliest enemies of armies in A the field are not bullets, but bugs; not battle-w-ounds, but camp-diseases— typhoid, pneumonia, dysentery, rheumatism, cholera. Granted a fair amount of courage and intelligence (and the

average in both these basic qualities runs pretty much the same in all nations), the man who can take care of and depend on his health under all circumstances, so as to be fit at all times and capable of prolonged endurance in forced marches, long sieges, and weeklong battles, will make the best soldier. There is no human activity which so vividly illustrates and enforces the value of personal hygiene, preventive medicine, and community sanitation as does modern war. When a half-civilized, or tropical, or even easygoing average civilized town is taken over and occupied by a modern army, it gets such a cleaning up, sanitation, model health service, and suppression of nuisances generally as it never had before.

The military motive for the care of the health and community hygiene is of particular value in getting boys interested in these subjects. They are apt to think, with perhaps some shade of excuse, that to be particular about one’s health and the tidiness of one’s surroundings is unmanly and old-maidish, if not a trifle cowardly. But when it comes to keep themselves, their company and regiment and camp fit and ready to defend their country, then they will fairly turn themselves inside out in their efforts for spotlessness and wholesomeness.

Last, but by no means least, comes the enormous and dominant, or at least overwhelmingly preponderating part played by mechanics and engineering in modern warfare. While a soldier must be taught to march and to shoot and to take care of himself in the open, man for man, the heaviest, the most important, most deciding part in modern campaigning is coming to be played by the intelligent skilled mechanic, the scientific craftsman.

ALMOST everything that we do to train our children for modern industrial life trains them also for modern war, with its field telephones and telegraphs, its helio signal-stations, its wireless plants, its aeroplanes, its underground galleries and mines with

their scores of miles of electric lighting and communications, its huge cannon, which look like a combination of a machine shop and an observatory on wheels, its troop trains, its ammunition trains, its hospital trains, its bath trains, its thousands of motors in every conceivable form—motor ambulances,, fleets of motor lorries for the swift transportation of reserve battalions to the weak spot in the line of battle, autotrucks, motor-driven kitchens on wheels. The man behind the gun is no longer a picturesque hero in a gaudy uniform, with a flashing sword or shinng gun— even the firing-line has got down to khaki now—but a hard-working, prosaic. master mechanic in blue overalls with grease-marks on them.

Wc s'md our eons out not to fight muzzle to muzzle, or struggle breast to breast with the bayonet and the butt, hut to bp chewed un bv machinery and crushed by pile-drivers and trip-hammers. The pile-drivers and trip-hammers don’t kill anv larger percentage of them than the bullets and the bayonets and the swords and the pikes did. but it makes the naked horribleness of the th;ng called war a little more sickeningly obvious.

IJut war for us is fortunately not an immediate nrobability. Glorious as it is to die for one’s country, comparatively few people will ever enjoy that privilege. On the other hand, it is even greater to live for one’s country, and that is possible for every citizen, although we seem to have forgotten—or almost so—that the latter ^is almost as patriotic as the former. So while some such system of military training as has been sketched would provide very valuable instruction for embryonic soldiers in the event of war, its greatest value, to which the military aspect is but incidental, would consist of turning out to face the battle of life more efficient men and more useful citizens. 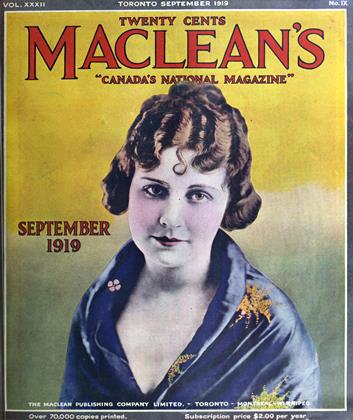