IN THE years since the war ended the United States has dropped from a pinnacle of almost adoration to a place of singular unpopularity. What are the reasons for this sudden change? Frederick Palmer, the war correspondent travelling through Europe comes to his own conclusions. Writing in McClure's Magazine he says;

If our government had flooded Europe with propaganda to irritate our Allies and the Germanic peoples; if every American who went abroad had set out to be a quarrelsome boor, we could not have better succeeded in making ourselves disliked.

In the days before the War the American was an outsider in European animosities. He was a strange mortal from a distant rich country going his own strange way and had the charm of paying his bills liberally as he went. Then he had not yet helped to “save Europe,” so Europe had no grudge against him. During the War he was courted and flattered until he thought very well of himself, indeed; for

some individuals mistook for personal compliment attention paid to the balance of power which their nation represented.

To-day the land of the "square deal” and “good will” in foreign relations, of the sponsor of young republics, keeping her hands off Mexico in the hope that Mexico can save herself, is becoming the scapegoat of the world.

Why should a people who sent two million soldiers across the seas to light for no reward and had received none and who are quite the same people they were two years ago, be the object of so much resentment. An English statesman whom I had known for some time, thus encouraged, visualized the European view with singular completeness and lucidity.

“After the armistice, your President came to France—a man of mystery, of unequaled world prestige,” the statesman began. “He held the purse-strings of the world. We knew we had to look to him for direction—though we did not like to think that we had to.

“He sat in the gold chair with Clemenceau on his right and Lloyd George on his left and we waited on his nod. He

had brought with him a ship-load of maps and geographical, ethnological and legal expects, and a shipload of newspaper men. American automobiles coursed the streets, your soldiers were everywhere. America dominated Paris and Europe. She was to make peace for us when it had been our war; for which we had paid the price in blood and money.”

“And your architects planned to build a temple of eternal peace called the League of Nations,” he continued.

“Put we think that an Englishman wrote the League of Nations,” I suggested.

“We think you wrote it,” he responded.

“So you laid the cornerstone of the Temple of Peace in the presence of all the newspaper correspondents,” ' he continued. "A year and more has passed. You have not even ratified the Treaty; no American sits in the Supreme Council except as a detached observer—to look after the very troublesome task of settling all the new tenants in their quarters. You’ve lost interest in your Temple of Peace in |the same way that the child forgets the house of cards that he built on the rug yesterday and is off to other

The statesman has drawn the outlines of the picture; its atmosphere is reaction from war propaganda. During the War patriotism required that you believe that all that you read from allied sources was true. Revelations after the War—in the new world left by the War—disinclined people to believe in anything they read.

For the purpose of keeping up its spirits, each ally had been propagandized with accounts of the heroic efforts and sacrifices of the others; no noble ally must think that there was a single human defect in any other ally; every man, woman and child of every ally was the good child of the story book. It was all too sugary and saintly. It was the emotion of a revival— there was bound to be backsliding. After the War each people went in for a real spree of human nature and to let the poison out of its system. Sick of hearing of the virtues of the others, each people thought of their own virtues, wrongs and sacrifices and that their part was unappreciated by the others.

“America lost only fifty thousand dead,” said Europe as the French thought of their fifteen hundred thousand dead and the British and the Italians of their threequarters of a million.

This enormous sacrifice is war propaganda that is pitilessly and eternally true. Much war propaganda was true—true to the character of brave men and women and the heart of humanity. The present feeling exemplifies the same human beings in a bruised and irritated mood.

The average Englishman or Frenchman does not realize that we lost even fifty thousand dead. Our Argonne Battle and the accompanying operations, in which we lost the majority of our casualties, came at the end of the War when the press of each country was occupied with the victorious sweep of its own veterans. All the reports of our efforts at home are forgotten warpropaganda.

I overheard one Frenchman say to another, “America was too late to do anything except make a grand gesture. She stayed out of the War to her profit and came in at the right time for her profit.”

To the European nations their multitude of dead was a grave economic handicap. As their stricken homes faced the bitter problems of reconstruction the survivor realized how huge had been the War’s cost in money as well as in blood. They had paid the money to us, as they reasoned, in the course of saving us from the Kaiser. As our part on the battlefield diminished to the vanishing point in European consciousness—the consciousness of those stricken homes struggling to recover their prosperity—it cast us for the part of greed in reaction to the habit of thought which in pre-war days had regarded Americans as “dollar chasers.”

We are partially at fault for this view. The Allies became used to depending upon us for money. After the War Europe still needed money.

“America will send it,” was the thought of the people as they placed the President in the gold chair and cheered him as the saviour of civilization, in the midst of a fever of extravagant spending. Then America in her abrupt, incomprehensible way suddenly drew her purse-strings tight except in relief work; European exchange kept on going down; profiteers

began hoarding silver in France; prices were rising with the inflation of paper currency as they were everywhere in the world. Who was to blame? America!

“If you haven’t all the money,” said a French laborer, “then why is there no more silver in circulation? You Americans have it. Our fool women are spending it for American silk stockings.”

Silk stockings to France the home of silk manufacture! And America had not yet signed the Peace Treaty! If France did not watch those Americans she would wake up some morning to find that she was an American colony. The French like a cri or a symbol of an idea in a word as much as we. American silk stockings became a cri. The woman who bought them was a Bolshevik and pro-German.

A bit of stage business in which Americans indulge when abroad does not tend to lessen the irritation on this point. I have heard at least a dozen Americans exclaim to other Americans when foreigners were present: “Do you want to see some real money?” and then exhibit an American five or ten or twenty-dollar bill. Not infrequently, too, they gave it as their opinion that Europe was bankrupt.

The American who exhibits his bills is quite unconscious of any malice. The sight of the bill gives him a thrill of national pride: it is a symbol of home of the same appealing kind as the sight of a piece of pie or griddle cakes after long exile on European food.

Surely I should find that we are popular in Belgium. Hadn’t we fed the Belgians, knitted socks for the Belgians, and sent our old high hats and frock coats over to clothe the Belgian peasant as he tilled his acres under guard of the German sentry? From all I heard, I might conclude that the clothes we sent did not fit, and our food rations caused indigestion. Subtle reasoning could even have persuaded me that we stood guilty of having kept the Belgians alive in order to exploit them after the war.

“We’re just thinking in the vexatious present as we struggle back on our feet. By and by, when we have leisure to think of the past again, we shall remember America’s goodness.”

This suggested _ that there might be such a thing as international gratitude. One does not expect it; or. if he does, the American in Europe is inclined to the reflection that it is for him to give and not to receive. Again, while I am on the subject of Belgium, I was reminded by Belglfns that, with all honor to Hoover’s initiative and organization, the sums which America gave him for food relief were relatively small. The bulk of the fund came from the British and the French governments, as Britons and Frenchmen do not hesitate to remind the Belgians in these commercial days when each nation, aiming at trade opportunities in its neighbor’s market, can always find a popular subject in turning a point against the international scapegoat.

Holland having been neutral and also sharing the discredit of being a “war profiteer,” I at least looked for sympathy there. Yet even Holland was infected by the general European view.

“If America had landed her army in Holland instead of blockading us—we are suffering from that still—and supported us in a way to enable us to be in the War at the end, how much better it would have been,” said one Dutchman, expressing an angle of Dutch opinion which at least took its origin in the thought that our army had been of some service in the War. I went to Germany expecting that the late disagreement at arms might be prolonged into a disagreement with the Allies’ view of us. Far from it! Underneath the urgent desire for our help in credits and raw material was the same latent resentment, embittered by the despair of a beaten people.

Some people think that an article of this kind does harm because it feeds irritation with irritation. They hold that soft soap and molasses, whose reaction we now have, is the better way. I think that it hides real feelings which one day may violently erupt through the crust of deception.

Only by seeing ourselves as others see us and others as they see themselves; only by learning the causes of our unpopularity can we remove them. We Americans can afford the luxury of being amiable. Our wealth, our power includes the responsibility of the soft answer that turns away 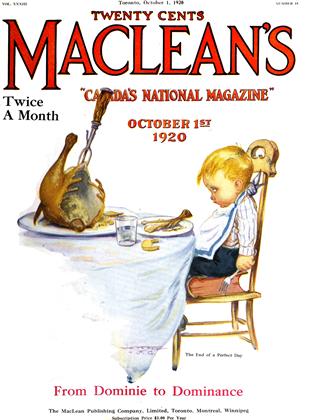