A SPECIAL correspondent of the London Times lately visited Fiume in order to obtain a first-hand account of the situation in that region. His description published in a recent issue is full of interest and novelty. He says in part:—

On approaching the “holocaust city”— so D’Annunzio calls it—from the sea, there is nothing to inspire enthusiasm or to justify pride. The little steamer from Abbazia clings close to the shore and runs slowly along the wharves, which extend for more than a mile from the inner harbor. Not a movement can be seen as empty warehouse after empty warehouse is passed, with long rows of splendid cranes running out upon their overhead trollies and stretching useless arms above the vacant quays. The first impression is that the city is dead, that, stricken by some sudden disaster, it lies shrouded in rust. The brownish red pall overlying the grey paint contrasts with patches of green weeds that have sprung up between the flagstones. Grass, too, is growing in the gutters and on the roofs of buildings which were once the scene of bustling activity. Can this be Fiume, “the City of Life?”

But the scene changes. The inner harbor is reached and there the Dante Alighieri, a modern battleship, lies with steam up and her big guns trained landwards on the roads leading to the town. Close by are a couple of cruisers, four or five destroyers, and a flotilla of smaller craft, about 16 in all. So D’Annunzio has quite a fleet. The ships have not lost the Navy look. They are spick and span, and as we pass one of the destroyers the Captain is being piped overside in true navy fashion. Our tiny craft berths at a mole which abuts on a wide open space leading to the centre of the town. I step off and an official demands my passport, which he calmly confiscates, saying that it will be given back to me at the Questura, pin tarde. Protest is unavailing, and I find myself in Fiume without identification papers of any kind.

It would be easy, very easy, to write of Fiume in Gilbert and Sullivan strain. Here is the Paradise of Youth, the wildest dreams of boyhood adventure come true. Everybody seems to be about 20. Some of the more staid men may be 25 and from time to time an elderly person serves to emphasize the immaturity of the overwhelming majority. In strong contrast with the background of listless apathy

furnished by the townspeople, whose children have been shipped away, there is among the “Conquistadores” an atmosphere of enthusiasm, of hero-worship, of self-confidence, of joy of life, altogether extraordinary when one stops to think that for more than a year now triumphant youth, bubbling over with vitality, has been cooped up in this narrow space, without work to do or battles to fight, without knowing how its grand adventure will end.

The picturesqueness of the seen makes one blush for the lack of imagination which stage directors show when attempting to present a pirate play.

But it is not the comic opera setting that counts. It is not the weird costumes which youthful fancy has devised for its own selfglorification, nor the medals and stars that D’Annunzio has plastered all over his legionaries, and which they value above any decoration won in war. The thing that counts is the force that gives cohesion to all this turbulent quicksilver.

It is a great mistake to underrate D’Annunzio. This mari is a real force, not only by what he has been in the past, but by what he is, and stands for, to-day. No one did more to bring Italy into the war, and some of his speeches then, like his Fiume orations now, will endure as long as the Italian language. He fought on land, at sea, and in the air. He was severely wounded, and even after the loss of his right eye he remained in the fight. He has always dreamed of a greater Italy, supreme in the Adriatic and extending its influence over the Balkans. He is quite sure that Italy has been robbed of the spoils of victory by the “ingratitude and egotism” of the Allies, and he is just as ready to give his life now for what he .believes to be his country’s due as he was to die for her in battle. D’Annunzio possesses both constructive imagination and executive ability. He is an untiring worker, and has that divine gift of

fiersonal magnetism which attracts the oyalty and devotion of other men. There can be no question of his power to sway the masses. The almost religious admiration in which he is held by the regular Italian forces—officers and men of the Army and Navy alike—is surpassed only by the fanatical fervour of his own followers.

And well may they look upon him as super-human and have faith in his lucky star. Has he not appeared successfully to defy not only the Government of his own

country, but' the Allied and Associated Powers to boot? Have they not left him for more than a year in undisturbed possession of the city he seized? Has he not

_by acting while others talked—set the

whole Peace Conference at nought? But his Ardili have other and more immedi; ate proofs of his power to perform miracles for them! For 13 months Fiume has lived i without working. The wharves are deserted, the railway is over-grown with ! weeds, the factories are mostly shut—— the great Whitehead torpedo shop, which in 1913 employed 1,800 men, now has only 1 some 350 workers. Business in the town I is limited to supplying its needs and I doing a little trade with Trieste, Venice ! and parts of Dalmatia. And yet in some j totally unexplained fashion the soldiers are paid, the unemployed are given bounties, food is plentiful and, compared with other Italian cities, living is cheap.

The soldiers and sailors get regular Italian army rations, with something added, and extra allowances of wine. Of everything there is an abundance, not excepting money. Fiume is the only city to-day where one gets real pure wheat bread made from the finest white flour. It t as tes J ike cake. Indeed, the other day,

D’Annunzio was able to sell 2,000 tons of white flour to the Austrians.

During the early days of his occupation of Fiume, D’Annunzio’s whole program was summed up in the words Italia, o Morte! and every preparation was made for the defenders to sell their lives as dearly as possible and destroy the town rather than surrender it. Fiume was thoroughly mined and everything made ready to blow up public buildings, highways, water mains, wharves, piers, warehouses, etc., if need should arise. The town is still mined, but D’Annunzio knows now that he will never be called upon to defend it against Italian troops. Indeed, he is entirely surrounded and protected by the Italian Army of’ Occupation, which has been thrown forward, beyond the Treaty of London line, and now occupies the heights above Buccari, where a small force of Yugo-Slavs is stationed.

No Italian soldier will raise a hand against him, for does he not wear the medal of the mutilated and the# Gold Award of Valor—the equivalent of the Victoria Cross? Much of the immediate future of Italy may be bound up in the three words D’Annunzio has inscribed upon his banner: Quis Contra Nos. 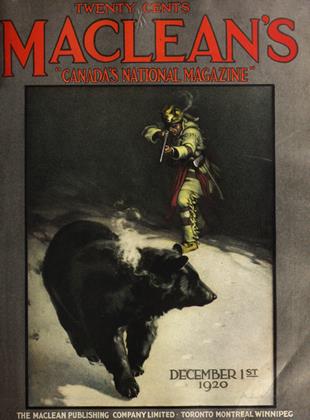