WRITING in a recent issue of Vanity Fair, Sir Gilbert Parker, who has lately joined the ranks of those who are devoting much of their time to writing for the films, makes a strong defence of the movies. Admitting their present limitations he speaks of them as an irresistible force that will develop a higher standard with the passage of time.

I call the “film” the irresistible thing, because it has come to stay and it is impossible to prevent its huge development. It has many honest enemies, who love art and hope that the film may cease.

That, I say with confidence, is a vain hope. It has not had many years of life and yet look at the immense strides which it has already made.

Millions, in the English-speaking world, who have never been to the theatre—or if they have, to the third or fourth rate theatres—have gone to see the film.

I believe that probably sixty per cent, of the plays presented on the screen throughout the world are poor and that twenty per cent, of them are atrociously bad, but that does not shake my faith in the screen or in its future. I have seen a few splendid screen dramas and I have faith that those few will become the rule rather than the exception. If the same class of intellect gives to the screen, in the way of critical attention, what it gives to the best book or the best play the screen will rise to great heights.

There is this to be said for the film; it reaches millions where a book or play reaches thousands or tens of thousands; and if artistic work can be done on the film, why not take it on?

Sooner or later every great writer will contribute to moving pictures werk of which he will be no more ashamed than of his best book; but he has yet to learn how to do it. It is an art by itself, and its many failures are due to the class of brain employed in the construction and development of plot. It needs the best brains in the world and the best brains should not hesitate to support it, but the machinery must become familiar to the fingers of the artist.

I don’t think an author should begin by adapting one of his books. He should start on a new and original theme, having his mind free from the many details in a book and treating his theme as the playwright treats it—independently. Then, when he has learned the trade and “knows how to do it,” he will be mercilessly harsh with the details in his books, the many incidents that are not essential yet which he feels sorry to obliterate.

I would, if I could, put a film theatre in every village and in the school of every village in the English-speaking world. What is learned by the eye is never forgotten and it is an easy way of getting knowledge if you can’t study zoology, geography, etc., at first hand.

Secondly, I would have a cinema in I

every village for the reason that I think it the greatest agent for temperance in the world. A working-man goes to the public house for entertainment chiefly, and to get away from the small rooms a rut large family of his house. lie goes to the cinema for a few' pennies, takes his wife with him and, if he is there enjoying himself, he does not go to the public house or tavern. I have one such industrial village in England 1 in my mind one I know well. It used to be one of the most drunken places in the United Kingdom. Through the film it has become almost sober. If I were a temperance reformer, I should advocate films in every spot where there was village or town life.

This must be remembered: that, if a good film is produced, it goes to every village just as it was originally produced, not like a play, which, however good or classic, goes to the villages in a meagre and defective form, with poor scenery, third or fourth rate actors and actresses, with the result that the lines and the thought of the play are injured.

That is why there is need for good films and why every one should lend his aid to improve them.

It is of no use to call the film “cheap, silly and vulgar,” for the same can be said about the play.

I was talking, a few nights ago, with one of the sanest and most distinguished figures in American public life. He knows this country through and through, but is not especially favorable to the film. Yet he said that great industrial plants have arranged film presentations for their men, and the men have remained more contented than they otherwise would be. Besides, the films took them away from Socialist and extreme radical meetings, and, in the case of his own industrial companies, gave them deeper interest in their own manufacture of steel and iron, so that, inspired by the films they had seen, they took to reading scientific books about it to give them further knowledge.

That is all to the good.

Capital and Labor have long been at variance, and Labor has not always received its full due, but the film will help to solve—is helping to solve—the problem between the two classes of society, the intellectual, inventing, and originating class and the intelligent producing class, and that is a great national asset.

The film has come to stay. It is indispensable now. When the public accepts a thing there is good reason for it. The public has given its approval. It should, therefore, be the object of every good citizen to help improve the movies. The films will be no better than public opinion demands. The public is an intelligent public, on the whole, and their criticism makes for better presentation. The spoken plays that are produced are in accordance with public taste; when that taste improves there will come better plays. When the public demand a higher class of film they will get it, and wise makers of films are ready to respond.

No one would deny that The Birth of a Nation and The Miracle Man are worthy of approval, however sentimental the latter may be. They are in the right direction and from that type of film will come the bigger and the better thing. The film, then, as I said at the beginning of this paper, is irresistible. It is also illimitable and international. It depends on the public and on authors whether it be made a great agent for good in the world. It might become an agent for evil. 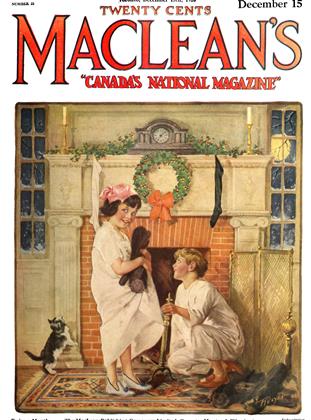