THERE is a very generally prevailing feeling that the Labor element in the Ontario Legislature is adopt-. ing a very moderate attitude in their demands for legislation at the forthcoming session of the Ontario Legislature. The election of such a substantial Labor group was viewed in some quarters with a good deal of apprehension. It was feared that despite any consideration of expediency they might endeavor to force through certain favorite measures, as a payment for their co-operation with the Farm Party.

The Peterborough Examiner and numerous other papers note with satisfaction the evident realization of Labor that all its aims cannot be reached in a day:

“By the decision of the Labor wing of the new Government not to press for an eight-hour day during the coming session the greatest obstacle to the smooth working of the Farmer-Labor alliance has been removed. There was little possibility of the two factions coming to an agreement on the question. A crisis would undoubtedly have speedily developed had Labor’s representatives shown a stubborn attitude on the point.”

The Toronto Star has this to say of the matter:

“The program of legislation that the Independent Labor Party is asking the Drury Government to sponsor during the session of the Ontario Legislature opening next month is modest. The Farmer branch of the Coalition is bringing along a number of measures for the benefit of the rural districts, and will be well advised if it balances off its program by adopting the reasonable reforms advocated by the Labor branch.”

In commenting on Labor’s attitude toward property qualifications in municipal elections the Star continues: “It is possible that the Farmer-members are not enthusiastic over the proposal to abolish the property qualifications for municipal candidates. Perhaps their objections could be met by making the new law apply only to towns and cities. But in any case the Farmer group must be prepared to make some concessions to the Labor group in return for those it receives. It should not, and we feel sure does not, insist on a one-sided partnership.”

The Toronto Globe also comments on this proposal:

“It will be interesting to watch the attitude and the

action of the Legislature on this question with a group of Laborites there to press it.” “Altogether,” it concludes, “the Labor men may be said to have given evidence that they are determined not to embarrass the Government in its trying ordeal of a first session. ”

The Kingston, Ont.,Standard sees in Labor’s proposals a wise and helpful program, and urges a sympathetic cooperation:

“The problem which the Labor element has mapped out for itself at the forthcoming session of the Legislature at Toronto is a sensible, wise and helpful one. Chief of the measures to be recommended and pressed for passage are: Mothers’ Pensions, the establishment of a Minimum Wage Board, and Amendments to the Workmen’s Compensation Act. All three are necessary and all three should be supported by the legislators generaUy.”

There is one dissenting voice in this general feeling of good-will toward the Labor party, and in the general confidence in the justice and moderation of its views. The Cobalt, Ont., Daily Nugget sees in certain amenities between the Labor Minister and some advocates of the O.B.U. a suggestion of a mutual interest that bespeaks danger.

“Hon. Walter RoUo, Drury’s Minister of Labor, is coming to Cobalt to speak in behalf of the candidacy of Angus McDonald. Rollo, the Labor leader, is said to be an anti-Radieal. Is he coming to Cobalt to urge antiRadical Labor legislation? If that is the case, then his speech must be one of war on the O.B.U. The One Big Union was to have held a meeting in the Opera House on Sunday night, but will make way for Mr. Rollo and hold its meeting in the afternoon. Is the war between the Radicals and antis of Labor such that one branch extends the olive branch to the other, or is it that the O.B.U. knows that it and its creed will not suffer at the hands of Mr. Rollo? If this is the case, then how closely related are the creeds advocated by Mr. Rollo, Mr. McDonald and the One Big Union, or are they one and the same?”

Unquestionably, however, the great burden of public opinion is favorably disposed toward the Labor Movement, and is the more ready to give ear to its just demands hy reason of the moderation of its attitude in Ontario at this time. 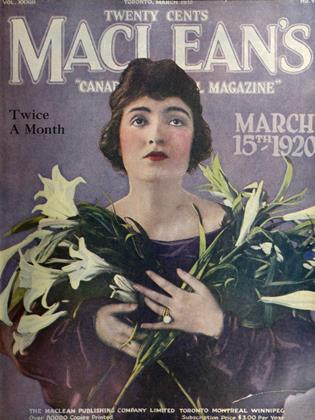