IN these days the way of the Dictator is hard. Not only are kings being pretty generally deposed in Europe but the still more absolute though uncrowned kings of America are going into the discard. No longer does it seem possible for one man to acquire a grip on the destinies of any people and hold it as they did in the palmy days of mushroom Latin republics and military oligarchies. The New York Times, in commenting on the hurried departure of Cabrera from Guatemala, calls him “The last of the Dictators.” A picturesque figure is Manuel Estrada Cabrera, for twenty-two years president and absolute ruler, now a fugitive. T. R. Ybarra tells it in the Times as follows:

It looked last week as if the opponents of Manuel Estrada Cabrera, despotic monarch—it seems absurd to call him by his official title of President—of Guatemala had at last driven him from power. After an unbroken rule of twenty-two years this last of Latin American dictators suddenly found himself attacked in Guatemala City, his capital, by rebel soldiers, and compelled to fly to save his life.

The grim old chap fought hard to turn the tables on his enemies, as he has so often done before in his sensational career. At one time his forces, hemming in the capital from every side, had begun bombarding it; and the dictator’s reentry into the city was imminent.

And Guatemala knows only too well what such a re-entry means. There have been plenty of plots against Ca-

brera before, and each time plenty of men—women, too in some cases—have been stood up against a wall and shot. His way since he came to power in Guatemala in 1898, has been soaked in blood; the prisons have been packed with his political opponents; mysterious stories have been constantly told of how influential foes of his have disappeared forever, leaving no trace of what befell

For Cabrera takes no chances. Even his apologists admit that his methods are, to put it mildly, drastic. One of them wrote in the course of a favorable estimate of the Guatemalan dictator:

“Doubtless he has overplayed the ‘Off with his head!’ game.” If that is what an admirer puts it, think of what his enemies have to say!

Cabrera is the last of the breed of genuine Latin American dictators. He is an anachronism. He has projected himself into an era in which “Presidents” staying in power from decade to decade are distinctly unfashionable; in which there is altogether too much interest among Latin Americans in elections and votes and other strange things prevalent in North America.

Yet, in the very midst of this era, Manuel Estrada Cabrera maintained himself, snapping his fingers at all attempts to oust him. He holds the world’s record for escaping assassination.

Only two long-distance autocrats of Latin America have ruled more than Cabrera’s total of twenty-two years— Porfirio Diaz of Mexico and Dr. Francia, the famous ruler of Paraguay. The other

most famous dictators of Central and South America, despite the long terms of office, have not succeeded in equalling Cabrera’s total of years as “President” of his native land, “elected” by the “votes” of his fellow-countrymen.

Manuel Estrada Cabrera was born Nov. 21, 1857, at the City of Quezaltenango, in the interior of Guatemala. He studied law at the national capital and was appointed Governor of the Department of Retalhuleu and, in 1886, Chief Justice of his native city of Quezaltenango. But these posts were not big enough for his ambitions. He managed to get himself appointed “Segundo Designado,” or Second Vice-President, of the republic. And then, when President Barrios—quite a little long-distance ruler himself—was assassinated in 1898, Cabrera saw his chance. As Second VicePresident, he was not the man who would automatically succeed Barrios— there was a First Vice-President in the way. But that trifle didn’t bother him. He is said to have walked into a meeting of the big men of the Barrios Government, laid a revolver down on the table before them, and remarked:

“Gentlemen, I am President of Guate-

He was right. And he has been President of Guatemala ever sanee. The term “President,” as has been hinted, is putting it far too mildly. A Czar in the palmiest days of Czarism, a Roman Emperor at the height of Imperial Rome’s power, a bloodthirsty despot of the Far East, might well envy Manuel Estrada Cabrera, firmly seated on his Central American throne in this year of grace

1920, cheerfully acting in a way that would have made a tyrant of antiquity blush for fear that he' was overdoing things.

His rule was absolute. His capacity for attending to details, for keeping an eye on everything that will insure his remaining sole arbiter of Guatemalan destinies, was simply marvellous. The members of the Guatemalan Assembly, though it is externally a perfectly good legislative body, modelled on the Parliaments of really democratic lands, are simply his creatures—or so his enemies say. His Cabinet Ministers are slaves. Everywhere Cabrera has spies. Nobody, native or foreign, enters or leaves Guatemala without having his every move reported to the despot. So terrible is this system of espionage, so acute the suspicion aroused by the dictator’s methods, so well known his ruthlessness when once he has decided to swoop down on somebody, that his name is never mentioned in Guatemala except in whispers. Every man suspects his neighbor.

Cabrera has amassed an enormous fortune, it is said, largely by confiscation of plantations and other properties in Guatemala. His principal foes are among the land-owning class, many of whom he has driven from their country in order to confiscate their holdings.

It is no sinecure to be rich in Guatemala. A Guatemalan called Herrera, reputed to be the next richest man in the land after the dictator, has been jailed over and over again in order that he might be persuaded to give a “voluntary contribution” toward running the Government. Cabrera, it is said, becoming bored finally at this constant round of arresting Herrera, remarked that the only way of getting all Herrera’s money away from him was to kill him. However, he was afraid that foreign nations might object to. this, because of the second richest man’s great prominence, so he reluctantly allowed him to stay alive.

He has a large army, which he keeps efficient, since he realizes quite well that his power rests on bayonets. The private soldiers are recruited by force and get only a few cents a day. The officers, too, are poorly paid, but they,slike the civilian officiais of Cabrera, are not, according to common belief, deprived of means of improving their stipends.

As a result of the various attempts on his life, Cabrera, it is said, wears a bulletproof coat. Another story is to the effect that, fearing poison, he would take no food except that spedaUy prepared for him by his mother, which was served to him in a hermetically closed steel casket which he opened himself at the table.

There seems small room for doubt that Cabrera’s regime is ruthless and his methods utterly despotic, but his defenders insist that, on the whole, his long reign has brought more good than evil to Guatemala. He has improved the country’s finances, they* say, carried out many important public works, reformed and liberalized the laws, fostered agriculture, introduced modem systems of sanitation. Above all, they . declare, he has shown himself such a zealous believer in education that he has installed in Guatemala a really up-to-date school system based on American models. According to a report from Mr. Winslow, American Consul-General at Guatemala City, made some years ago, there were few villages in Guatemala which had no schools, and, in Guatemala City, with a population of about 100,000, there were three colleges, eight institutes and twentyfive public schools. A few years ago Cabrera caused to be built at his capital an imposing building called the “Temple of Minerva” which he dedicated to the advancement of education.

During the great war, the Guatemalan dictator, according to report, was instrumental in nipping in the bud a German plot for causing revolutionary outbreaks throughout the five Central American republics and extending them, if possible, to Panama and Colombia. The German Minister at Guatemala, Herr Lehmann, was said to be the master-mind behind this plot, and Herr Eckhardt, German Minister at Mexico, was abo named as one of its instigators. Cabrera, it was said, got wind of it, warned the United States Government and thus effectually blocked its progress- 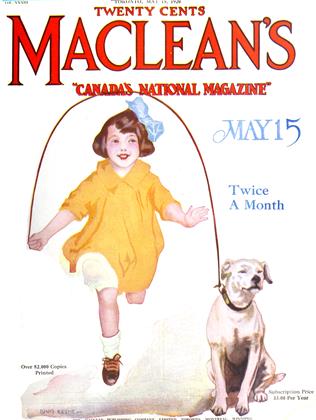