The Strong Man of Mexico

Obregon, One-armed Leader of Yaquis, is Now the Dictator of That War-ridden Country.

The Strong Man of Mexico

Obregon, One-armed Leader of Yaquis, is Now the Dictator of That War-ridden Country.

A COLORFUL sketch of Obregon, Mexico’s latest “man of destiny,” appears in the Forum, from the pen of Agnes C. Laut. Miss Laut writes in part, as follows:

Obregon has been the dark horse of Mexican leaders, whether he be elected President, or chosen as military dictator.

He is yet the dark horse of Mexican leadership, because, whether he wins or loses, as military leader or as President, his success or failure will alike create a dilemma from which there is no escape. And Obregon never fails. Even his enemies admit that; and no man in Mexico has bitterer enemies or loyaler friends. He is no half-way kind of man. Carranza feared him and gave his support to Pablo Gonzales, who is reputed to be a blood relative of the First Chief, in order to create a counterfoil against Obregon; but Gonzales saw which way public opinion was swinging, and went over from Carranza to Obregon, which sealed the doom of the dictator. And he is the only man who can control the Yaquis; and the Yaquis have never yet been conquered by any man.

The one joint of weakness in his armor is his health. He lost an arm and he is an ill man. Apart from that, he has escaped death by a hair both by bullet and secret poisoning so often that; his followers consider he has a charmed life.

He has made serious mistakes, as all strong, quick actors hedged by treacheries are prone to do. At one stage in his career, he could save himself from the Carranza junta only by a quick alliance with the I. W. W.’s, and he got the support of 100,000 of them before his enemies knew what he was doing: but that antagonized the conservative middle-class business men. At another stage in his career he was infuriated by the Catholic church getting a loan of 30,000,000 pesos for the Huerta crowd, and he waged a furious campaign against the church in politics. That antagonized another powerful group. Then he was violently pro-German and anti-American. The Germans were winning and Obregon had been brought up on anti-gringo school books, nourished by gringo hatred in his own heart; and that inspired bitter enmity among the Allies. Yet when Obregon came to know Americans and visited American cantonments, in spite of himself he became the trusted friend of Americans; and to-day he does all his business with Americans and his financial agent in America is a former editor of a New York paper, who now handles all Obregon’s funds through an Arizona bank. It is a safe bet if Obregon could go back five years and rescind all he said against Americans, he would go back and sponge out the foolish words of an angry threat about "running all Americans out of Mexico.” In fact, his first words in ejecting Carranza from Mexico were that the anti-American policy of Mexico had been “national suicide” and a “tragedy.”

A great many friends will protest they will die for you; but when it comes to a five dollar bill, they are not sure they want to live for you. That isn’t Obregon’s brand. Once when Villa had Obregon in his power in Chihuahua, he happened to have on his person in gold and negotiable bills $40,000. It is also a safe wager Villa did not know that money was on Obregon’s person. Obregon sent for the American newspaper man who is now his financial agent. “If they get me,” he said, “they will also get my subordinate officers. They are poor. Their families will be left destitute. Take that”—handing the American the $40,000—“and if I am bumped off, distribute it equally among the families of the officers.”

That is one side of Obregon’s character. Here is another. On one occasion he had in his car several representatives of the foreign embassies from Mexico City. There had been a battle. A mortally wounded peon was howling at the top of his voice for his mother. “Does that blank fool think I am an incubator?” he asked, and through the car window, by one well-aimed shot, the wounded crier was stilled forever by a shot from some Obregon officer.

Twice Villa had the death squad ordered to shoot Obregon; but he was stopped by the insolent nonchalance of the man. “What would you shoot me for?” he asked without the flinch of an eyelash. “If you shoot me, you’ll only split the Carranza party and make a present of the country to foreigners. If we hold together we can hate each other, but we can keep Mexico for the Mexicans,” and Villa knew it was true, for the American State Department men were on the spot; and he ordered the death squad back to barracks, roaring and swearing at the top of his voice, like an enraged bull, as he relinquished the chance at prey in hand.

What brought the split between Obregon and Carranza isn’t hard to guess. Obregon was the strong man; but the United States had recognized Carranza. Whatever Carranza may have been, himself, it was his tragic misfortune to be surrounded by dishonest scoundrels who threatened his life and ultimately assassinated him, as I predicted more than a year ago they would assassinate him, if his luck changed. However cruel Obregon may have been on occasion, he has always fought with a certain code of honor, and his worst enemies have never accused him of dishonesty, or faltering in loyalty to his friends.

One episode will explain why, though Carranza and Obregon held together, their military commanders could never operate in the same field together. It was down in Vera Cruz. A Carranza relative was in charge. There was at that time no embargo on the importation of firearms Remington 30-30 shells were being used. The Carranza man had 2,500 men. Ten million rounds of ammunition came in. The Carranza general reported it all “shot off,” and requisitioned one hundred million rounds. That, too, came in. It, too was reported “shot off.” If, as the Germans figured, one bullet out of 25 should hit a man, this general must have “winged” four million enemies, hut that was not his game. He called in a little foreign broker—not an American—turned the ammunition all over to the little broker, and sold it back to the Government. This was done three times. The little Austrian broker boasted that he cleaned up $200,000 as his share of the deal.

This was the sort of thing that made Obregon froth at the mouth. It is the sort of thing that makes "him bitter enemies to this day in the Carranza junta. Then there were other little things. Obregon wanted to be first to Mexico City. He was held back by red tape till Carranza beat him to it. That happened over and over in all Obregon’s campaigns. It perhaps explains why Obregon would not go against Villa, when Carranza’s men couldn’t whip Villa.

He won the Yaquis by the simple, but in Mexico altogether unusual, proceeding of practising what he preached. He believed the Yaquis could be pacified only by having their own land to till. Now Obregon has descended from a Mexican family rich in lands. Would he divide those lands up with the Yaquis? That is exactly what he did, though he did not give them title unless they bought. He would set aside an acre or two acres to a family. He would advance the family a plow, a horse or mule, and one sack of beans to plant—all to be charged against returns. Now one sack of garbonza beans will produce 280 sacks worth $14 to $18 a sack. All advances were charged against returns; then, for the use of the land, Obregon took 25 per cent of the net profits.

But he went farther than this. As all farmers know, the trick is not to raise a crop. It is to sell the crop without letting middlemen steal all the profits; so Obregon created an exclusive monopoly in Sonora for garbonza beans. They must all sell beans to him; and controlling all beans, he raised the price to $18 a sack. Of course, enemies howled at the word monopoly; but his worst enemies have never accused him of cheating the growers, one cent. Compare his methods with Alvarado’s socialistic experiment on the same line with henequen in Yucatan, when all profits went to overhead expenses and the growers were reduced to ruin. Yet Alvarado is to-day Obregon’s finance minister, which, in itself, holds seeds of future quarrels.

Obregon had always been a colonel in his own home guards; so when the revolution broke out he called to his six hundred Yaquis all the others who would come. It may be asked how the Yaquis got their firearms and how they get them to-day. Yaquis work on the American side of the border. They go constantly back and forward across the border, and when they go back to Mexico they carry shells with them. And they are very sparing of shells. They use the knife. When they find an empty shell, they run lead into it, put in their own fulminating cap and use it again. It is a shell crueler than dumdum bullets.

So when Obregon reached Mexico City he had 15,000 men. It was then the Carranza junta began to fear him and began to conspire. Obregon countered so quickly, his enemies quaked. Dr. Atl, a madly enthusiastic I. W. W. man, educated in Paris in all the tenets of Red Revolution, was called in. One can imagine how Obregon’s land policy appealed to Atl. Atl got out among the unions. Conductors, drivers, taxi men, deserted in droves to join Obregon’s army. When Obregon left Mexico City, he had 35,000 men and his enemies were powerless to touch him; and he has never forgotten Atl. When Atl went broke from the very excess of his own theories, it was Obregon kept him in pocket money, and as late as July, 1918, Obregon sent Atl $100 in Los Angeles.

But the association with Atl raised another host of enemies—the Carranza junta and the old safe conservatives. He was too powerful for open attack, but secret attempt after attempt was made on his life. Once a conspiracy bribed an Indian boy to sell him some cones of poisoned ice cream. Word through Indian friends came to Obregon. In sheer bravado, Obregon ordered the boy to help himself to a cone. The boy of course picked out an unpoisoned one. “Oh, I’ll take that,” said Obregon, beginning to munch the boy’s safe cone, and he handed the boy another cone. The little Indian went from yellow to green with fear and began to weep. Obregon went on unconcernedly eating other cones. Luck was with him. He didn’t chance to pick the poisoned cones, but the boy didn't dare to eat the cone given to him. A confession followed. The conspirators were summoned. They were given the cones. One merchant died on the spot. I forget whether three or five of the conspirators were shot, but all the press announced was ptomaine poisoning. 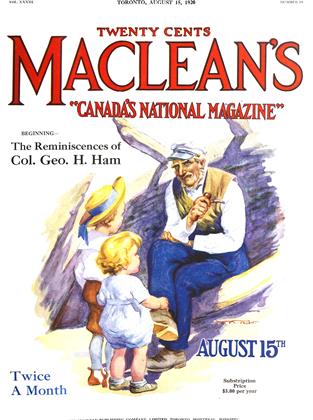