WHEN THE WAR CLOUDS BURST

WHEN THE WAR CLOUDS BURST

A SOLDIER AT McGILL

How and Why Sir Arthur Currie Was Appointed

THE appointment to the principalship of a great university of a man of action rather than a graduate of the schools is certainly a considerable deviation from the accepted practice. From time immemorial the custom has been to hold scholarship as an essential, yet, when the name of General Sir Arthur Currie was mentioned to replace that of Sir Auckland Geddes, whose appointment as British Ambassador at Washington had required the cancellation of his appointment as Principal of McGill University, Montreal, the suggestion met with universal approval.

General Sir Arthur Currie is not the graduate of any college. He had a good general education. As a boy of eighteen he gained his first-class teacher’s certificate, and taught school for several years. Beyond that he has gained his training in the University of the World, by rubbing shoulders with men, and by facing large responsibilities.

Colonel J. B. MacLean, writing in MacLean’s Magazine a good two years ago, declared that the large administrative gifts General Currie had shown himself to possess, and the prestige and influence that his former position would give him over future generations, were assets too valuable to be lost. Colonel MacLean suggested at that time that General Currie was eminently fitted to be the head of a large educational institution. That was before his appointment or any appointment to McGill had been considered.

Subsequently the position was offered to Sir Auckland Geddes, a former professor of anatomy at McGill, and the invitation was accepted. It was generally conceded then that the appointment was a wise one, providing leadership under a man of proven administrative ability. The appointment later of Sir Auckland to Washington came, therefore, as a considerable blow to the board of governors of the University. There was nothing to be done but to fill his place as best they could, and a committee of five was appointed to consider the matter and make suggestions.

Looking for the Man

' I ‘HERE were a number of names under consideration, among them that of Prof. W. G. S. Adams, holding the Gladstone chair of Public Institutions and Government at Oxford University, and the Master of Balliol.

A representative of the committee went to England to consult with Sir Auckland Geddes and to look over the British educational field with the idea of finding a suitable incumbent there. Professor Adams met this representative in London, and definitely refused to have his name considered. He was not, he said, an administrator, but a teacher, and a teacher he must remain. He mentioned four men, however, of whom Oxford University was especially proud, any one of whom he thought would be a credit to the position.

With a mind somewhat unsettled the representative of the Board of Governors called on Sir Auckland Geddes. Sir Auckland had several names to suggest, and the other spoke of those who had been under consideration in Canada.

‘‘Hasn’t the war produced someone for McGill?” asked the Canadian representative mentioning the fact that the name of Sir Arthur Currie had been tentatively suggested. Geddes thought it over for a moment.

‘‘That’s the man for McGill,” he said, and it is to be remembered that Geddes knew the University and its peculiar needs. “Yes,” he said, “the more I think of it the more confident I am that he is the right man.” Consulting again with Professor Adams, in the consideration of the various names he had suggested, the representative brought up Currie. Without hesitation Professor Adams agreed that he was the best choice.

Before leaving England the Canadian representative met the Master of Balliol, and here again he received a hearty confirmation of the wisdom of the choice of General Currie.

The Board Affirms the Choice

pTIS name was therefore presented to the Board. It -*■ came as somewhat of a surprise to some of the members, especially to the business men on the Board, who would not have thought of recommending one who might bave been called a non-academic man. When it developed,

however, that the academic members of the Board, who represented two-thirds of its personnel, were heartily in favor of the choice, the business members were quick to show their approval.

There were a variety of reasons raised as to why General Currie was peculiarly suitable for the position. A man of unquestioned idealism, he could give to the organization under his control the inspiration without which any educational system would become a dead thing. His creation and administration of the Canadian Corps in France had proved beyond a doubt that he was a man of unusual organizing ability, while his service in France gave ample evidence of a statesmanlike leadership.

When the representatives called on General Currie and put the proposition to him his first words were:

“But, gentlemen, I am not a college graduate.”

“We know that,” they replied, “and have taken it fully into consideration. We will give you whatever teaching staff you require.”

With this assurance that he was not sailing under any false colors, and would not be depended on for any kind of scholastic work, General Currie accepted the invitation to become principal of one of Canada’s greatest educational institutions.

What the New Principal Says

GENERAL CURRIE has little to say with reference to his appointment. “I cannot say that I have thought of any policy in regard to the principalship of McGill,” he stated, in answer to an enquiry. “Looking after the hundred and one details of my present office of Inspector General of the Canadian Forces takes all my time. Anyway I don’t think it will be possible to formulate any policy until I am better posted in regard to the University than I am at present. When I take up my work in Montreal I mean to spend some time in studying the history of the University, and not only that but what it has stood for, and still stands for, not only in Montreal, or in Canada, but in the Empire. Of course I know something of McGill, many of the boys over in France came from there. I remember once in France passing a lot of the boys coming from the front line. I happened to stop beside a peculiarly muddy and dishevelled private. He wasn’t clean and he was evidently dog tired, but he was cheerful.

“Well, how are things going?” I asked him. ‘Fine sir, fine,’ he replied. Then came the conventional question, ‘What were you doing before you came out here?’

“ ‘Well, sir,’ he replied with a grin. T used to be a lecturer at McGill University.’

“I can say this much, that I am glad to get this opportunity, because it seems to me a large opportunity.

“I came back from the War, as I think most of those who returned did come, with a feeling that we must be coming to a world that had changed for the better, that all the suffering and sacrifice must have meant something. But I found, as others have found, that there was no change; that there was at any rate no change of heart. Men were fighting for the dollar with the same passion and the same disregard of the suffering of others as they had years before. There was little difference in the viewpoint toward life. There was little indication of a growth of a national spirit. The same petty jealousies prevailed between the different sections and provinces as had prevailed before we went away. There was little appreciation of the world situation either, and apparently little interest regarding it.

“I took my position with the Canadian Army in Canada, thinking that I could bring into use some of the things I had learned overseas. But I found out that I was hedged around by limitations, set by people who saw in all military organization a growing menace. With the circumscribed conditions prevailing it took little persuasion to make me leave the military life though I have learned to love it. But it seemed to me that perhaps in McGill there might be a real opportunity for me to work out some of my ideas, that would help to develop a more sane and wholesome ideal of nationhood. I might help to maintain an esprit de corps and might be in a measure instrumental in turning out good citizens with an appreciation of what good citizenship means.

“I do not believe that a university is merely a factory for turning out doctors and lawyers, and engineers and teachers. I want to see it a great seat of learning where students could not only come to get their certificates, but where they could get a vision of citizenship, where they could learn to better serve their fellow men, where they can develop high character, good morals, and sound health as well as intellectual abilities, and where a diploma is only the milestone on the road to a better type of citizenship.

“So much I would like to do. How it can be done, I do not know, but at least I see, in the principalship of McGill University, an opportunity as wide as any offering to-day.”

THERE is much to be said for the appointment of a military leader to this position at the present time. He brings to the work a personal prestige that will be a great asset to the University. He brings as well a knowledge of young men and their ways, for it was an army of boys barely beyond college age that he commanded, that should make him a great administrator. But beyond that this choice is a wise one because he goes to his position as a representative of the new spirit that has grown out of the war. A spirit that understands, because it has seen and known all the horrors of those long years, that out of them there must come some better ideal of citizenship and patriotism than the world has yet known. 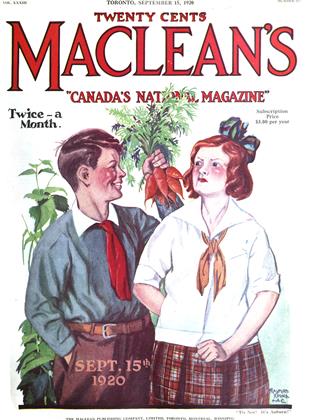