ALL THE great leaders of Germany have broken into print to explain how it was that it all came about. The last of these is Bethmann Hollweg Imperial Chancellor of the “Scrap of Paper” fame. A. J. Toynbee, writing in the Manchester Guardian, gives an outline and excerpts of the book that has not yet appeared.

In the discussion he says:—

“The ex-Chancellor confesses, no doubt with as much truth as sincerity, that the main currents of activity in Germany which were sweeping her towards war were beyond his control. Why was German policy not so conducted as to avoid being placed on the horns of a dilemma in July, 1914? T think that this question largely overestimates the freedom of action allowed us in our decisions of the last decade. Germany also had fallen under the spell of the ideal of power then dominating the whole world.’ And he proceeds to argue that German naval and Oriental policy could not have been altered except by the leverage of a change in British policy which (though he fails to realise it) it was equally difficult for any British Minister to bring about. Ostensible acts of will like the German declaration of war on Russia or the ultimatum to Belgium seemed to Bethmann Hollweg like mere registrations on his part of the fact that uncontrollable causes had engendered their inevitable results. T was, of course, under no illusion as to the effect on the question of responsibility for the war that our declaration of war (on Russia) would have and actually did have.’ ‘The offence against Belgium was obvious, and the general political consequences of such an offence were in no way obscure.’ But the issue was decided, not by the Chancellor’s judgment, but by the long existence of a vast and intricate piece of machinery— the arrangements of the General Staff for mobilisation and war on two fronts. The button had been pressed; the machine had to work. Bethmann Hollweg never contemplated the possibility of reversing the lever by his puny human strength. He had found the clockwork all wound up, the wheels all grinding in 1909, when he first took office. He could not stop it five years later.

“He has a certain fellow-feeling for the other victims of fate.

“ ‘The view that England of malice prepense sought for a trial by battle with its German rival is, in my opinion, as wide of the mark as the English ideas of the same nature about us. The real explanation probably is that statesmanship in these two countries was either too weak or else unwilling to save the world by a doughty deed from a fate that was already hanging over it like a threatening storm. And if I am confident that I did my best towards effectively conjuring this danger, I am in no way blinded by self-conceit to the inadequacy of my efforts.’

“He has even a testimony to give to the pacific feelings of the people of France, but when it comes to the Governments as opposed to the peoples of the enemy Powers his determinism breaks down, and he withholds from them that absolution of impotence of which he takes the benefit himself.

“To Bethmann Hollweg’s mind, Grey, Poincaré, and Sasonov were far from being automata like himself. They were very much masters of the situation indeed, and manipulated it skilfully and malignly to the ruin of civilization. ‘The question of criminality is a question of causality, and it was the Entente Powers that piled the fuel on the conflagration. Germany laid no faggot on the pyre,’ and her act of setting light to it, we are left to infer, was really only a roundabout form of spontaneous combustion. Germany, when it came to the point, had no option about supporting Austria-Hungary after her ultimatum to Serbia, but if Russia supported Serbia in this situation, and received in return the support of England and France, that was not a product of determinism, but an act of will equivalent to a deliberate causation of the war. Again, the Austrian ultimatum itself was disapproved of, he tells us, by the German Government, but the text was communicated to them too late for them to intervene. Yet, having confessed his own impotence to restrain his ally, he is merciless to the British Government for having had a similar experience with Russia. He recurs to this point several times, and at the close of the volume practically sums up the cause of the war as lying in the unwillingness of the British Government to put pressure on their friends at Petrograd.

“This is the weak point of the book, and the author’s failure to realise that pre-war statesmen in all the capitals of Europe were as human and as impotent as himself also clouds his understanding of the state of mind of the enemy peoples. He realizes and admits the strength of German chauvinism and militarism, but he can only see them as insuperable obstacles to his own policy; he does not picture to himself with sufficient imagination the effect which the Navy Bills, the Army Bills, the speeches of the Kaiser and of the Pan-German deputies, the régime in AlsaceLorraine, the Zabern incident, and other manifestations of this spirit in Germany had upon the public opinion of England and France. And when it comes to Belgium he is completely at sea. Even now he does not seem to realize the spontaneous and profound feeling aroused in England by the violation of Belgian neutrality, not only among the chauvinists and reactionaries but among people of all opinions and classes—including idealists who, if they had not died for this cause, would have been equally ready to lay down their lives to prevent the iniquities of the subsequent peace.

treatment of Serbia is the most striking and the most depressing feature in Dr. von Bethmann Hollweg’s presentation of the case, and this comes out even more strongly when he deals with Belgium. His explanation of the circumstances in which he used the famous phrase, ‘scrap of paper* is one of the most curious passages in the book. “ ‘The expression was perhaps an indiscretion, but my blood boiled at his (the British Ambassador’s) hypocritical harping on Belgian neutrality, which was not the thing that had driven England into the war, and at his complete want of perception that an English declaration of war must destroy so much that was of value

in the world that violation of Belgian neutrality was of comparatively little weight.’ “Not only does he beg the question be-, tween principle and opportunism but he still pleads for the sacrifice of a principle (equality of rights for great and small States) in the name of opportunism when the catastrophe itself has shown the error of this policy even from the opportunist standpoint. Surely the war has proved that the most practical safeguard against its own recurrence is the rigid enforcement of some system of international morality. The ex-rulers of Germany seem to have learnt this lesson no better than the present rulers of the victorious countries.” 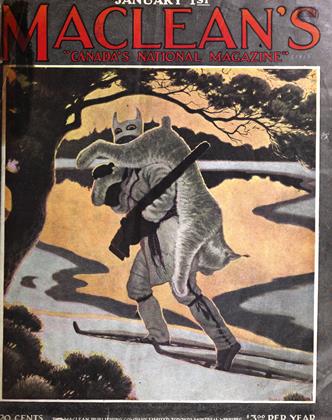