IT IS doubtful if even at the height of the great war the people of Canada devoted more serious thought to the condition of their country than was done at the coming of 1921, with its accumulating economic problems. There had been a period of six months of falling prices, signs of depression in industry, and increases in unemployment, which embarrassed the authorities of the larger cities and with it all the general question was: What of the future?

Not that the feeling was one of pessimism, but the country was embarked on uncharted waters in the recovery from a condition which was without precedent. Retail business had been seriously affected by the buyers’ strike, which was now showing signs of weakening, but after a measure of success in bringing down prices.. Wholesale business was depressed through the failure of retailers to buy, and many manufacturers felt the pinch of lack of orders. At the same time, it was well known that the average consumer was still far short t; f being saturated, and that enormus potential buying power lay somewhere below present prices.

Although wholesale prices have declined more than 20 per cent, in six months, there was still a lack of reduction in many retail lines, while back of it all there remained the necessary adjustment with labor before stable levels could be reached. Fortunately, there were signs that labor was realizing that it, too, must take part in the economic change. The most hardfisted employer was reluctant to reduce wages, and this reluctance has aided in a better relationship between labor and capital at this crucial time.

A few unions which have actually asked for an increase cf wages at this time do not represent the majority, and, on the other hand, it should he mentioned that clothing workers and others have agreed to accept reductions commensurate with the lower living costs, and in an endeavor to get industry going again. A happy result of this changed condition will be the turning toward the land of many workers from the congested cities. This will make farm conditions more equitable and endurable, and give an assured living to many who now suffer from the over-development of urban industry.

This statement calls attention to the actual condition of Canadian agriculture. Farmers, who may still be called the mainstay of Canada, have suffered a serious jolt from the steep and rapid decline of prices of their chief products, more especially wheat, within recent months. The farmer, however, is in one sense better off than the city man whose product, his labor, is temporarily at a discount, for the man on the land is in no danger of starvation, and, as a rule, he is not in need of any assistance. He produces the bulk of his own food, and were he under siege he could exist for some time by himself.

* however, said a true thing in a New Year's article in the Globe, when he wrote: "From a national standpoint, it is absolutely essential that the Canadian farmer shall carry on. and carry on strongly. Tl e meeting of our foreign obligations depends principally on his activities. Added to this the period of deflation with its consequent slowing up t; f many of our exotic manufacturing industries and the cessation of many, urban activities, points

to the farms as the outlet, not only for many of the unemployed, but also for many manufactures which cannot hope to find a market elsewhere. It is all important that this outlet shall be found, for it is the only one in sight.”

Mr. Drury has expressed an elementary truth in present disturbed conditions. It is of the highest importance that the farms should he cultivated aggressively, and it Ls likewise imperative that the labor conditions in rural Canada should be relieved We are approaching the end of the di» arrangement caused first by munitions making, when greatly inflated wages drew men from the farms to the city foundries, and gave them a taste of extravagant incomes, which they were loath to leave behind. A return of many of these men to the farms will ease the strain on the farmers’ wives and daughters, who have been driven to the fields in order that the acres might be tilled and the hungry nations of the world supplied with food.

One difficulty the farmer must try to solve with the aid of governments. He is now the principal producer, the price of whose product he has little share in fixing. He sows his crop, upon which certain necessary labor is required, and he reaps his harvest, but he is subject to conditions he cannot control when it comes to fixing the market price. That is something he will not forever endure, and measures of «^operation have been under discussion in Ontario and the West.

Viewing the outlook for Canada broadly, the questions of trade and taxation naturally bulk largely. It seems to be taken for granted that important changes in taxation may be expected in 1921. The withdrawal of the luxury taxes, with a few exceptions, just before Christmas, seemed a hint of important readjustments. This change was largely for psychological purposes, with a view to stimulating retail buying and employment, but the Minister of Finance expressed the opinion that the tax had served its purpose. There is a feeling that the excess profits tax will be the next to go, partly because of the feeling that it is unfair to industry at such a time, ! and partly because excess profits will be a rarity under the slowing down of business, i

Trade Balance Against Us Q’lR HENRY DRAYTON in a statement j ^ at the beginning of the year drew serious attention to the continued heavy i imports of Canada, which showed an increase of $281,000,000 or 44 per cent., for the first eight mont of the present fiscal year. This, he pointed out, far out-weigh. ed tiie small increase in domestic and foreign exports, and reversed a favorable balance in 1919 of $202,000,000 to a debit balance of $75,000,000 for the eight months’ period of 1920. The unfavorable trade balance with the United States of $77.000.000 during the first eight months of 1914 has grown to $230,000,000 during the same period of 1920. In making this comparison, however, allowance should be made for the steep rise in prices in that time, but even after that it will be seen that, the increase in imports from the United States has been heavy. On the general outlook. Sir Henry said:

"Loans are no longer profitable. In view of the depreciated sterling. England is no longer making Canadian investments. Borrowing in the United States, while postponing the immediate effect of our adverse trade balance with that country. in the long run merely accentuates it.

The more money borrowed, merely for the purpose of trade adjustment, the greater amount of our so-called invisible deficit, as more money must be sent out of Canada to United States in payment of interest demands. The real remedy is to buy less, export more; to do without all imported articles which we nationally can do without, and to increase to the fullest possible extent those productions which will command a ready export market.

“There are many things which we must purchase in the United States, and some are undoubtedly necessary outlays on capital account and intimately connected with the enlargement of our productive machinery. This is a necessary concomitant of the development of our resources. But it seems quite clear that importations of goods that can be done without, or which can be economically produced at home, can only at the present stage seriously embarrass our trade position, and add, by a resultant depression of exchange, to the cost of the basic importations which are essential.

“On the whole, our position is indeed fortunate. Canada stands to-day less injured and certainly with greater potential resources than any other country taking a like part in the war. We are to-day inevitably feeling the result of that participation. Difficulties, financial and commercial, undoubtedly exist. They are, however, small in comparison with the difficulties already overcome. The achievements of the war give every justification for confidence and self-reliance. It is still true that the future of Canada is just what her people choose to make it.”

BANKERS are habitually cautious in their comments on business conditions, and it is not to be expected that utterances

of enthusiasm should come from them at this time. They have lived through j a trying period and it should be said that Canada has endured its financial strain probably as well as any country, and that its banking system has caused the minimum of friction under the circumstances. Naturally, there have been complaints at the restriction of credit, but this was inevitable. During the post-war boom, some business men felt an uncontrollable impulse for expansion, a had to be curtailed by bankers. Letters from many manufacturers have shown, however, an almost entire absence of complaint, so far as the bankers are concerned, so that it is apparent that such pressure as has been exerted by the banks to curtail credit has been directed more especially against schemes for unnecessary expansion and speculation.

At the end of the year C. A. Bogert, president of the Canadian Bankers’ Association, expressed an opinion that the outlook for industry and business in Canada was not promising for the next few months, but it was altogether probable that by the end of 1921 a new era of prosperity would be in sight. On the | attitude of the public towards the prob: iems of the coming year, he said: j

“It is obvious that the Canadian people j must continue to produce to the utmost, and in this course they will be supported j by the Canadian banks. The doctrine i of economy has been wisely and insistently promulgated throughout the country, but the time has arrived when people with money to spend should afford some encouragement and assistance to merchants by making reasonable purchases. This cannot be construed as extravagance—it is the only way in which commercial liabilities can be reduced and domestic trade stimulated.” 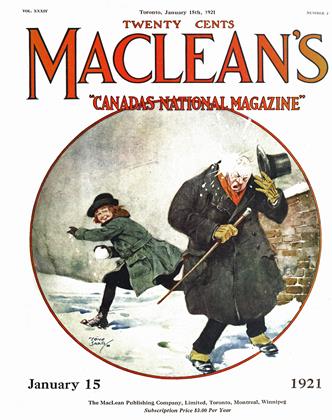