Article VI in Our Food Series

IT SEEMS strange that the most common of our foods are the ones most universally neglected—yet such is the fact. Consider the dried apple, the prune, the raisin, the apricot and the various other dried fruits. How often do they appear on your table? Once a week?

Yet you like them. Everyone likes them. It would be a strange palate that did not welcome at least one or two of these fruits. They are delicious, they are cheap, they are convenient to keep and to prepare and they are nutritious.

tart or cut a substantial wedge of raisin pie don’t you promise yourself that these tempting delicacies will thereafter be more frequent visitors at your board? Of course you do—we all do!

And then what happens? We forget about them until we are hard set for a dessert, when we call them into service again and repeat the promise and the habit of pushing them out of sight again. That is, we do if we are in the city where we can drop into the delicatessen or bakery for a more fancy, if less healthful, dish. Of course there are thousands of Canadians who have not the corner store always ready to meet their whims and whose very location makes them look to the dried fruit almost every day. For, as you know, the dried fruit can go anywhere, requires no attention and is ever ready for instant

Because of its marvelous keeping qualities, its convenience and low cost many of us have come to regard it as a substitute

food, something to be used when notV!ng else is availab’e.

to us those fruits that we could not otherwise have; fourth: because dried fruits are so easy to keep; fifth: because climatic conditions do not affect them and, sixth: because they are so reasonable in

To the adult dried fruits offer a generous

variety of delicious, health-giving foods that have not been robbed of their natural goodness by the process of drying. Far from it, in fact. The sun has an opportunity to mellow the fruits and to enrich them by improving and increasing their carbohydrate content and by making their proteins and salts more easily digestible.

The process of drying takes nothing from a fruit but a portion of its moisture— its nourishing qualities are left intact. Its proteins, carbohydrates, fats and mineral salts remain unharmed.

Value of the Humble Prune

TO THE child the dried fruit is of inestimable value, for it can be made into sauces and stews that form an important part of its diet, the pulp of the boiled dried prune, for instance, being one of the standard dainties and desserts to offer the child of any age, from its first days in the high chair through adolescence.

The raisin is another dried fruit that now plays an important part in the feeding of children, for it not only acts as a food but also substitutes as a confection, thus eliminating the undesirable candy and other sweets and giving in its place a food of high nutritional value.

And now, as to the reason for dried fruits. First of all, drying widens a fruit’s use. If the prune could be had only fresh, canned or as a preserve, it would probably be little known outside the localities close about the districts in which it is grown. Certainly this is true of the fig and the date and, to a large extent, of the grape. It also lengthens the time of service of such fruits. If it were not for the raisin the grape would be known to us only during the late summer and early winter months. If it were not for the process of drying, apricots, peaches, pears, figs and many other fruits would be unknown in many communities and seen on any of our tables only a few short months each year.

Drying also gives fruits wider distribution—it prevents waste and brings these valuable foods within the reach of even the most modest purses. Millions upon millions of dollars’ worth of fruit would rot on the ground every year if it were not saved by drying, for while the larger part of our immense volume of dried fruit is made from crops raised especially for that purpose, growers many times resort to drying in order to save the surplus of an unusually heavy fruit crop. This is probably done more often with peaches and apples than with any other fruits.

Suppose the peach trees in California— for it is from that state that nearly all the dried peaches come—are loaded with a bumper crop, and suppose, as is often the case, that sugar and cans and labor are high. This naturally tends to limit canning activities, and unless some other method of preserving the fruit is found millions of dollars’ worth of waste will result.

The answer is simple, dry them.

The drying of fruit is not a new process. It has been done in Canada and in the United States from aboriginal times. The Indians of the Great Lakes region were drying apples and berries when the white man came to the great land of the West. Of course their way of doing this was crude, as was also their way of drying meat—but the product was an important addition to their meagre food supply.

And so, too, are the dried fruits of today a valuable addition to our food supply, limitless though it seems.

THE GREAT fruit drying industry is in the United States—principally in California. It used to be in Spain, and from Spain we would receive great shipments of raisins and other dried fruits. But our imports are largely from the St ites now, seven hundred million pounds of dried fruit being produced there every year. 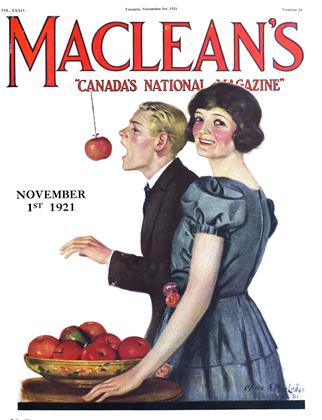