DUMMB animals actually enjoy performing before the motion picture camera, declares Helen Christine Bennett, in an article in Collier's, written after she had spent six months in the studios in Los Angeles, California. Furthermore, she emphatically denies that the animals used in pictures have to be cruelly beaten in order to make them play their parts. This is what she learned about “Snooky”, the famous performing chimpanzee of the Chester comedies:—

“Snooky was born in captivity, of a father and mother who were trained actors, Napoleon, now dead, and Sally, still living. Snooky is six years old and as full of mischief as any three-year-old human. He likes to smoke a cigarette, drink out of a bottle, upset anything, tear anything to pieces, race, scamper about, climb on anything handy; and he needs little training to do any of these things. He is not nearly as intelligent as the screen shows him to be, for on the screen Snooky apparently thinks up all the mischief he does, while in reality he merely does the mischief planned for him by a director.

“Like most chimps, Snooky is very fond of children and likes to play with them. Not long ago the Chester Comedies produced a picture which used a number of children. Snooky enjoyed himself to the limit and so did the youngsters. But in playing with one ten-year-old girl, Snooky reverted to forest tactics and bit her. Mr. Rounan promptly gave Snooky a whipping. Snooky took the whipping without resentment, although he is estimated to have the strength of three fullgrown men.

“Usually young chimps are reckoned as ‘safe’ animals for actors to work with. But never are they entirely safe. Mike and Mary, two intelligent chimps who worked at the Selig studios, and appear both in serials and in the Selig-Rork comedies, are known as ‘safe’ animals and have always been so with babies and children. Mary delights in dressing and undressing babies and handles them with tender care.

“Chimpanzees rank as the most intelligent animals in motion pictures. Orang-outangs are not as intelligent and are much more dangerous. Their period of usefulness is shorter. As one trainer expressed it:

“ ‘When an orang-outang gets to be about seven or eight, he goes mad and can’t develop any more. Something seems to get the matter with his brain. Chimps last longer. But they are all better young.’

“That is true of every animal in the acting game. Even dogs and horses hold to the adage; you can’t teach them new tricks when they are old. And the motion picture game is a succession of new things.

“This is how ‘trick’ animal sets are done:

“Take one of the favorite comedy scenes, one that is used again and again. A man crawls into a hollow log and is followed by a lion or a tiger.

“The log is shown jumping into the air as if a tremendous struggle was going on within. After a time the man crawls out dragging a dead lion. In the making of a picture, the man crawled into the log and out again. At some other time a lion crawled into the log, lured by the scent of a piece of meat placed at the other end. The dead lion was a stuffed skin; lions are too valuable to be killed for a picture.

“The lion was bribed, not beaten, to do his work. When you see a jungle picture in which a lion jumps from a rock or cliff to get a man, that lion is jumping after meat bait placed before him.

“When a lion has to appear to kill a sleeping man, a stuffed effigy is laid over some meat.

“All trainers agree that getting a lion or a tiger to act in the pictures is a very nice matter. Lions and tigers have a magnificent indifference to anything save their own affairs. But one useful habit of a lion is that he will always seek an outlet. In many scenes all he has to do is to appear and prowl about; so he is carried to the set in a shifting box, released, and left to find the outlet, which is so arranged^ that it guides him back to another shifting box. When a number of lions are used in a jungle scene, thç set is often completely surrounded by runways, all leading to and from the set to temporary pens. The lions will trot through the runways on the set, and off again, and produce the effect of roving through a jungle. If an old, crabbed lion is thus released, he may be made to stop and roar by waving a bright colored cloth at him. A motionpicture audience can “hear” a roar only from jaws far apart; a mere grumble or snarl will not suffice. But old lions are not used much; just a few of them are kept to tear up dummies and roar.

“But no matter how good the animal, the actor on the set with him is never out of danger. When large numbers of lions and tigers are used on a set with actors, armed men keep watch. But the lion can beat the shot, and sometimes does.

“A young elephant is as playful as a kitten. It is a far nicer pet than a kitten, for it is more careful of injury to its playfellows. Anna May, a ten-year-old elephant much used in the pictures, will lie down over a baby taking the tenderest care not to hurt it. Anna May is young and frisky, and loves to have a scene where she squirts water over people. Her training consists in showing her once or twice what is expected of her. After that she goes at it with a vim.” 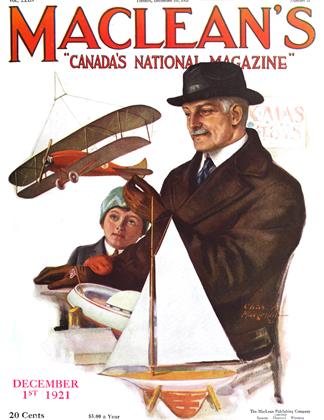