Getting Back to “Normalcy"

ALTHOUGH there were no spectacular developments which might account for the change, it was generally agreed that the first month in the New Year found an improvement in business and financial sentiment. The prevailing mass views of this group of people are somewhat intangible but extremely important part of a country’s opinion, and the fact that the pessimism of December appeared to have been appreciably modified was something very much for the general good. Too much should not be made of the change, for there may be some months of further hesitation and rough sledding as inventories are marked down, but, as far as it goes, the improvement is cheering.

changes now going on are the wage adjustments. Almost daily we read of Canadian firms making an agreement with their employees for the acceptance of a reduction in wages in order that the business might be kept going at a production cost more in keeping with the declining prices. Among the industries to reach a settlement of this kind were clothing trades, and one or two of the cotton mills, while certain lumber operators, steel companies and the Cobalt mines have announced wage reductions. In many cases, the new wage scale has followed a period of shutdown at plants, which probably took this course as a means of forcing the issue.

Index numbers of living costs in Canada continue to show price declines, but the retailer has been aggravatingly slow to put them into effect at the point where the consumer fully benefits. Wholesale prices on forty leading commodities dropped more than twenty-five per cent, from May to December, according to the estimate of Professor H. Michell, of McMaster University, and the cost of a family budget, as estimated by the Department of Labor, Ottawa, declined from $16.92 in June to $14.84 in December.

Wage earners, therefore, are naturally slow to accept reductions, but they must a'’mit that their lot was a fortunate one during the long period of inflation. There is much to be said for the policy of one manufacturer, who was faced with the alternatives of wage reduction or a shutdown, but who found another way, at least for an experiment. He called his workers together and told them that their average output during the past three years had been at least 25 per cent, below each man’s capacity. He said that, if they would increase their production by twentyfive per cent., he would maintain their wages, keep the plant going, and still have a little profit on the operation.

T TSUALLY, the stook market heralds V-' a change in economic condirions si months in advance. If that harbinger may be depended upon, the action of the Canadian exchanges and security markets generally early in January were hopeful signs. The depression of December was left behind, and an »all-round upward movement was visible. Net quite al1 round, either, for the piper stocks haj little share in the recovery. They had their turn last year, and there are few who now consider the outlook for paper stocks a bright one for the next few months. Still, the dividends of the paper companies are apparently secure for some time to come, and that may continue firmness in their prices.

W’hile the revival in the stock market in January included a few speculative issues, it was largely confined to the bonds and preferred stocks. This conservative attitude by traders Ls counted as the natural beginning of a strong market as investors feel their way along. Any reasonable return of confidence, such as has been manifested, has first to dissipate the idea that the country is going to the bow-wows, and when that idea is disposed of people begin to think that dividends, after all, may not be seriously interrupted. For wejeks there have been preferred stocks selling at a price to yield 9 or 10 per cent., apparently quite regardless of intrinsic values. That could be explained while sentiment was depressed, and few had the courage to say that industry would become normal within any given time.

It was in the Victory bond market, however, that financial history was made, The slump which followed the relisting of the Victorys at the end of November was overcome in a series of sweeping advances, carrying all the Victory issues up to or beyond the prices asked by the Market Committee before their dissolution. The meaning of this movement is apparently that a new level of security prices has been established. Easier money is within sight, as commodities are liquidated, and what more natural than that the man or business house with a few spare thousands should put it into Victory bonds, which are perfectly safe and perfectly liquid? Therefore, within a month, the Victorys, as the premier Canadian security, so altered the bond market that investors were ready to accept a yield of L» to of 1 per cent, below what they demanded in December.

Embargo Removed AN IMPORTANT decision by the TV Minister of Finance late in January involved the discontinuance of the embargo against the importation of securities held abroad. This financial policy began with mild restrictions in February of last year, which were subsequently materially tightened. Their removal now will go far to bring normal conditions in the securities market, which could not quite find its balance or necessary stability until such an abnormal barrier was removed. The relisting of Victory bonds at the end of November and their excellent behavior in the market made the continuance of the embargo appear no ’onger necessary. There had been lear that the return to normal conditions by throwing down the bars would upset the securities market, but the recovery of sterling in Canada and the high money rates prevailing in England, compared with Canada, have changed conditions, and at this writing the effect of the removal of the restrictions appears to be slight. 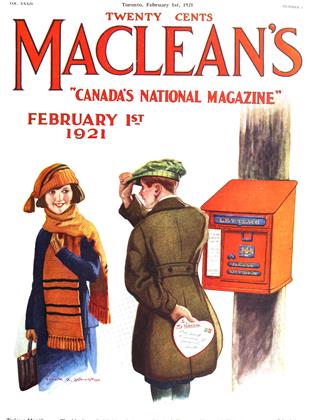