FRIVOLITY with the lid off,” must be Deauville’s middle name if we are to take seriously all that is mentioned in “The Bored Wasters of Deauville,” an article in the Ladies’ Home Journal by Mary Brush Williams. Deauville, she says, is the Mecca for the ultra-fashionable from all over the world including numerous titled visitors. “For three weeks,” she writes, “people hang round there, and,

“For ten days they show slight signs of animation, for one day they exert themselves, or ‘get a move on.’ Then it is as dead as in a hundred years. It is a flash for which stage hands assemble sets for three hundred and sixty-four days and the actors collect clothes. The area occupied for the spectacle is about the size of the town lot on which stands the Presbyterian church in your home town. There is a low shaded hotel in Norman architecture, the casino of the lovely,

stately lines, and a place across the street from it where chairs are arranged around tables on the sidewalk under a tree, and you sit there for about fifteen minutes a day.

“Why is it, then, that with all the wide surface of the earth to traverse, the wife of the governor of Albemarle holds out for the tiny stage of Deauville? Out of a full life, why does she insist that two weeks of it every year be given here? One word covers the reason. It is because of the display. A brief parade by day, and by night gambling. That is all. No movement, no progression—merely the hard grind of getting yourself ready for public appearances and sustaining the artificiality of your rôle.”

But as for the doings at Deauville (which, by the way, is a fashionable watering place in the Department of Calvados, France)—just read:

“The most famous watering place in the

world, however, was only four hours away, and I thought it would be dreadfully chic to get rested there. I had been to Newport a few seasons ago, and had occupied a tiny room under a sloping vine-clad roof of an annex to a smart hotel. Birds housed in those greens and twittered a greeting to me on the one or two early mornings when I came home to bed. Once I had been to a dance that began in one house, ended in another miles away, and included two besides in its progress there. Another ended in a moonlight swim at Bailey’s Beach. I calculated that our diversions in Deauville would be approximately up to that speed, but I thought erroneously. Deauville is not like anything we have at home.”

And as for the styles:

“There was a woman who seemed to me more or less to personify the spirit of the place. She was a mysterious, fascinating, foreign lady, whom we passed in the fashionable parade.

“ ‘The Princess Skarakatski,’ everyone was breathing. ‘Did you see the princess? She makes a mystery of her eyes; she wears feathers over them to lend them mystery.’

“ ‘She has lovers who have wished to marry her from every nationality. But the prince who chose her loved her not.’

“ ‘Her town house is so beautiful, but she is lonely in it all alone. In her boudoir she lies always on a leopard’s skin. Exotic flowers line the staircase, and incense

“‘She is a wondrous horsewoman. In the war she assisted with despatches. She carried them in the south. At night she defended herself with the sword. She has great courage.’

“She had the courage of her clothes. It is the style this season to wear patterns so big that they spread over on to your neighbors. Whoever had the dress with the biggest pattern won. The prize went to her. The dress was of bright yellow and black, and her hat trailed a veil to a point below the waistline. Long after she and the comments on her had passed, I remembered her, and it was not for the pattem on her dress. Did she typify in concrete form the spirit and the personality of this exotic place?

“If so, her background was perfect. She was a part of the fashionable parade that is the one activity by daylight in Deauville. It takes place in a little strip of the main street, which, between eleventhirty and twelve o’clock is fenced off with ropes garnished with bows in the colors of France and the races. On one side it is bounded by the big building of perfect architecture, which is the casino, and on the other by a little bakery shaded by a tree. The sidewalk, out into the street, is set with tables, on which the sunlight, coming through the leaves, makes a pattem. It is called the potiniere, or gossips’ stand. At eleven-thirty it is as vacant as a haunted house. At twenty minutes to twelve people are clamoring for tables; girls are whisking the reserve stock over people’s heads; a crowd of women in gay dresses and floating veils are pressing into the bakery and fighting for plates and forks with which to serve themselves with pastry. The smell of hot chocolate is in the air.

There is a parade and a chatter, as at a reception, and at twelve-fifteen not a soul is in the place.

“Some say it is like life and others that it is like the season at Deauville. There is a swirl, a flash, a flare, and then nothing. You are sensible all at once of the line of low, long, shiny motors along the street, and the groups of linen-clad chauffeurs. The air is heavy with the smell of smoking

“You were absorbed with the word that the chorus girl was passing who is the mother of the Chicago millionaire’s child. How very slender and young and untouched by life she seemed! She had the sweetest smile. Her face was just like her pictures, and she had the knack of dressing simply. No hat, hair sweetly waved and parted ; thesimplest of slim black dresses embellished with one single trimming. There was a rippling lampshade tunic, round the rim of which and at the latitude of her knees ran a wide band of expensive chinchilla fur.

“ 'There's a girl with stockings on.’ Someone interrupted to comment on the novelty. The practice of going without stockings was common here.” 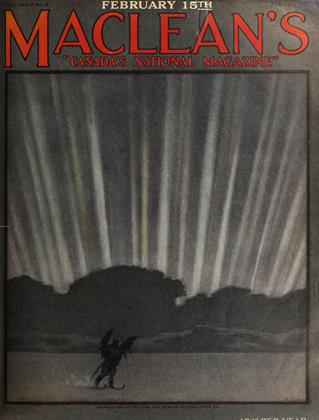