WOMEN’S organizations have been floundering in many ways to help immigration with the ultimate goal of making the newcomers good Canadian citizens. Everyone agrees that the foreigner must be Canadianized, that the incoming British settler must be made first content. There are many flagwaving plans advanced, there are lengthy talks on “Empire Building”—and sometimes on an exalted wave of patriotism women forget that one of the very greatest ways in which they can help these Englishspeaking immigrants is by old-fashioned friendly visits.

With that in mind and to give some practical assistance, eight-day short courses for the wives of the soldier settlers are being put on at the present time in different centres throughout the Dominion, and never has a more helpful practical plan been evolved to inspire new hope and to equip these women with knowledge to meet this new environment.

The need for these courses has been very great; for roughly speaking there are 5,500 soldier settlers in Manitoba, 4,800 in Saskatchewan and 5,500 in Alberta, approximately one-third being married. The new brides from England who have come to a new country, who are facing conditions entirely different from the Old Land, are in need of the education. The experienced mothers, who carried on so bravely while their husbands were overseas, are also in need of a change and a break away from the farms, and it has been proven that many of those who took advantage of the short courses held last year have been kept from giving up in despair and returning to England.

' I 'HE Western cities have been quick to respond to the appeal for co-operation from the women’s organizations and this year nine courses have been arranged. These have been held during the winter months at various centres.

tions will look after two hundred and fifty in Calgary.

The course is eminently practical and is filled to the brim with subjects that will be of the greatest use. A sample course given in Peace River in March, when fifty attended, is as follows:

Sunday: Special Service. (Many settlers on the prairie have not the opportunity to attend church.)

'T'HAT a Canadian girl won the international championship for speed skating is, in itself, enough to stir the pride of every Canadian interested in national sports. The story of how it happened is told by Miss Robinson herself in this issue.

Next month we will have the story of how a Canadian girl, working as a humble-salaried stenographer and erstwhile dancing teacher, went to New York.to take dancing lessons and instead went seriously into business, working from one objective to another until she now heads a million-dollar corporation.

Another Canadian woman has made a success of the novel enterprise of directing the Film Service of Educational Moving Pictures. It was not just an “appointment”; she began by learning to operate the picture machine. Her story will appear in an early issue.

Home Nursing, general care of the sick, including symptoms and care of communicable diseases.

Lectures, Nutrition as applied to milk and vegetables. Demonstration of milk dishes. Community work for women.

Thursday: Herne Nursirg, Care of the

U'VERY facility for entertainment is -*-J provided. The visitors are given the opportunities of attending the theatres, of hearing good music, of visiting creameries. Various societies arrange to give the noon hour meal. In some cities «ven street car tickets are given them, while a baby clinic —where each child is examined thoroughly, is a splendid feature.

It was Mrs. Mildred McKee Cunningham to whom the inspiration of these short courses and the credit of the pioneer work of organization is due. Being one of the supervisors of the home branch of the Soldiers’ Settlement Board she saw the need of this practical empire building. She saw the loneliness of the stranger in a new country. She saw the utter lack of the knowledge of making one’s own bread, of even meeting the conditions of climate and space, so peculiarly Canadian conditions—and so, after a great amount of work under her direct supervision the first course was held in Swift Current last year.

The tremendous results of this work cannot be estimated in figures but can be read in heart throbs—in the extracts from various letters, from one of which the following is quoted:—“For months I carried with me my fare to England, determined to return the first opportunity. It was all so lonely, so bare and so strange. Now I am going back to the farm with new hope to try again for I know I have some friends here and perhaps I have not tried as hard as I should.”

At the recent convention in Edmonton one little woman said: “It’s the first open fireplace I have seen since I left home. I saved my money last year to put in a fireplace. I did the stooking of the grain and my husband paid me for it—the same as a man—one hundred and ten dollars. Then one of the horses died and it had to go to buy another—but I will get it yet.”

“I cut brush,” said another woman. “And I didn’t tell a soul. It seemed a terrible thing to do but since I came to this convention I have found that lots of women have done it—so I’m ‘blowing’ about it now.”

Never has there been any convention or gathering of women that has struck at the hearts of the cities as have these conventions of the soldiers’ wives. It is the great opportunity of Canadian women to extend hospitality to the newcomer, and to form some spirit of contact between the woman in the city and the woman on the 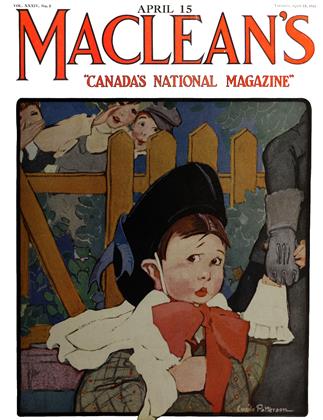