THE revival of anti-Semitism in Europe since the close of the war and its curious repercussion even in the United States, are phenomena that can no longer be ignored. The Jews,we are warned, are a secret organization, with branches in every land, whose aim is nothing less than world-domination. To attain their bold ends, they plan on the one hand, to undermine society by sapping its foundations with revolutionary and anti-religious propaganda, and on the other, to crush it from above by attaining control of the great banking and industrial system on which the material power of present-day civilization immediately reposes.”

So writes Paul Scott Mowrer in the Atlantic Monthly. He goes on to point out the various causes for the popular belief, and the reasons for his disagreement with the belief.

“The political argument ag'ainst the Jews is that they are an ‘international nation,’ more attached to the Jewish cause, in whatever part of the world, than to the ideals and interests of the country in which they live, and from which they claim the privileges of protection without according in return their political allegiance. To this is now frequently added as a corollary, that the Jew is a ‘born revolutionist.’ We are here, as I have already indicated, at the very heart of the Jewish question; for there is no state, there is no people, so good-natured and so confident of its own strength that it will unprotestingly tolerate in its midst a body persistently and willfully foreign, especially when this body at the same time aspires to take a leading part in the national economic or political life. That the Jews, after their dispersion, were originally such a tenaciously foreign body, in every community where they settled, is beyond dispute. That they remained so, partly of their own will, partly under compulsion, up to the time of the emancipation, fifty or a hundred years ago, is equally incontestable. The point that remains to be determined is to what extent, since the emancipation, a true assimilation of the Jews has been effected in the United States and in the various countries of Western Europe. To this point I shall have occasion to return presently. Meanwhile the corollary, that the Jew is a ‘born revolutionist,’ is worthy of careful consideration.

“Abstractly, there is certainly something in this assertion—something profound, which reaches to the very centre of the ancient Hebraic religious conception. The sturdy monotheism of Israel teaching that man shall obey Jehovah alone, carries by implication the idea that all merely human authority is unjustified and therefore negligible. This independence of conscience and reason is probably developed further in Judaism than any other religion, for it is considered as binding even on Jehovah himself. The Talmud relates how, in a dispute between rabbis over a point of doctrine, the voice of Jehovah intervened from the void ; but no sooner was this divine voice heard to pronounce in favor of Rabbi Eliezir, than Rabbi Josua protested, saying: ‘It is not mysterious voices, it is the majority of the sages, who should henceforth decide quesions of doctrine. Reason is no longer hidden away in heaven, the Law is no longer in heaven; it has been given to the earth, and it is for human reason to understand and explain it.’

“Moreover, implicit in Judaism, is a sentiment, quite different from the resignation of Christianity and Mohammedanism, that the joy and satisfaction which are the birthright of every man who keeps the Law should be forthcoming, not in some future existence, but here on earth. Even after they have forsworn their religion completely, a tendency has been remarked among the Jews to cling to the idea, not only that all men are entitled to be happy even in this life, but that all men are

equal before God, and that none can be held responsible save to his own mind and conscience. A poor man, imbued with this spirit, and looking about him upon the present world, is inevitably exposed to the temptation of becoming a malcontent, or even an agitator. More important, however, than this vague traditional predilection for revolutionary doctrines is the fact that the Jewish people, for more than twenty centuries, has been very cosmopolitan, bound to no country and to no lasting patriotism save that of Israel. It is no more than natural that the emancipation should have left a large number of them internationalists, in the literal sense of the word. If it were not for this cosmopolitan character of the people as a whole, the revolutionary proclivities of a few individuals would perhaps have passed almost unnoticed. Once more, we are brought face to face with the conclusion that the Jewish problem is, above all, a problem of assimilation. “That belief that the Jews are involved in a definite conspiracy for world-revolution arose at the time of the French Revolution, simultaneously with the emancipation of the French Jews by the Constituent Assembly. An intimate relation between the Kabbala and Freemasonry had long been suspected; and now the' Catholic Royalists were able to remark that not a few Jews seemed to be active members of the various lodges—Masons, Illuminists, Rosicrucians, Martinists—in whose secret conclaves the revolution was supposed to have been planned. The influence of Jewish agitators was again remarked in the uprisings of 1830 and 1848.

“But the great reproach that European conservatives hold against the sons of Israel is that Karl Marx and Ferdinand Lassalle, the founders of modern Socialism, were both of Jewish origin. ‘This descendant of the line of rabbis and doctors,’ writes Lazare, of Marx, ‘inherited all the force of logic of his ancestors; he was a clear-headed and lucid Talmudist ... a Talmudist who went in for sociology, and who applied his native qualities of exegesis to a critique of political economy. He was animated by the old Hebraic materialism, which dreamed perpetually of an earthly paradise ... he was also a rebel, an agitator, a bitter polemist, and he got his gift of sarcasm and invective from the same Jewish sources as Heine.”

So much having been said, a specific explanation of the present revival of anti-Semitism is almost superfluous. In Russia the majority of Jews, for obvious reasons, have rallied to the Soviet government exciting against themselves the always latent hatred of the anti-Bolshevist parties. The Jews of Poland and Roumania, being regarded, not altogether without reason, as foreigners inclining to sympathize with the enemy (Soviet Russia), are subjected to all the consequences that a similar situation provoked in America, during the war, between Americans and Germans. As for the half-assimilated Jews of Hungary, they earned the lasting enmity of the peasants and the administrative caste by flocking in far

teo considerable numbers to the disastrous red banner of Bela Kun, in the spring of 1919. In'Czechoslovakia, the Jews are subjected to the hatred of the otherwise fairly liberal Czechs, because they are suspected of being pro-German, and, in general, anti-Slav.

Coming now to the more prosperous and more completely assimilated Jews of Western Europe and America, one easily perceives that the feeling against the poor ones is an outgrowth of the fear of Bolshevism, while the feeling against the rich ones is a part of the general post-war clamor ag'ainst profiteers—the feeling in both cases being greatly intensified by the popular nationalistic suspicion that the Jews are willfully resisting assimilation.

We are thus, in the end, brought squarely back again to the surmise from which we started, namely, that the Jewish question is, above all, political, and may indeed be reduced to this one inquiry: Is it, or is it not, possible to assimilate the Jews? If it is, time, and liberal measures, will suffice; if it is not, then, so long as nations continue to be nations, and to abhor the presence within themselves of indigestible foreign bodies, there is seemingly no solution.

Obviously, the possibility of assimilating at least some of the Jews is beyond challenge. Indeed, there is no reason to suppose that a mixture of the so-called Aryan and Semitic races gives a result which is other than excellent in any respect. If the Jews have not heretofore been absorbed more rapidly, the causes are rather religious, social, and political than racial.

How can it reasonably be said, moreover, that this mixture is not desirable ? The Jews are one of the most remarkably gifted peoples of all time. They have it is true, the defects of their qualities, but in this they are by no means unique. The Jews are, in fact, generally speaking, sober, adaptable, industrious, and intelligent. For centuries cut off from most forms of handicraft and manual labor, they have been exercising their minds in study and trade. Their achievements in art, letters, and particularly in science and philosophy, if not preeminent, are at least notable. Why any nation should scorn to absorb an element so endowed is difficult to understand.

There is a class of Western Jews, however, who, while approving the theory of assimilation in the abstract, give to the word a meaning quite different from that generally accepted. In the minds of these Jews, it would be a calamity if Israel, by intermarrying with other nationalities, should lose its distinctive character.

But there is in this otherwise fairseeming comparison a slight misconception. If Israel were merely a religion, then, when a Jew ceased to observe the forms of this religion, he would cease to be a Jew. But Israel is not a religious but a political problem; and to shift it arbitrarily to the religious ground is to distort it from its true relations.

In the present day of intense nationalism, when the forces of interior cohesion are engaged in a silent and bitter struggle with the forces of international dissolution, the Jews, who by their history have become a cosmopolitan race in everything except their devotion to Israel, must make a choice. They cannot give political allegiance to two banners, even though this double allegiance be defended in the name of re- 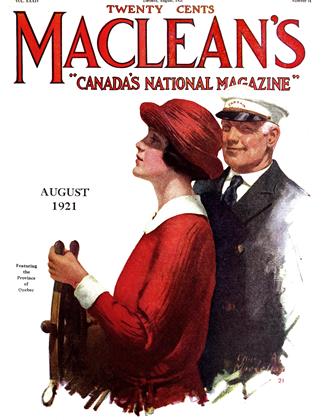