IN HIS characteristic vein, Mr. Shaw is writing a series of four articles for the London Nation, in which, among other things, he explains why he didn’t emulate H. G. Wells and “cover” the Washington Conference for a syndicate of dailies; and why he expects that the journalists there will publish little news that’s news except when it is officially and openly announced. Mr. Shaw says English statesmen, publicists and politicians are as “indiscreet” as those in the U.S,—if not more 40— but their views are not spread broad-

“Erglish public men do not affect "strength and silence. The strongest of them are the least silent; in fact, their indiscretion would astonish anyone who did aot know that it is perfectly safe; for the world consists of people of importance who will not betray them, knowing that society would be impossible if private conversation were given away to the Press, and of people whose credit is not sufficient to support them against indignant official contradiction, nor, consequently, to justify responsible editors in publishing anything startling on their authority. Thus State secrets keep themselves even when an expansive and talkative popular statesman (and what man can become a popular statesman to-day unless he is expansive and talkative?) pours them into the ear of every man he meets between his Parliament and his club, and then becomes the life and soul of the afternoon tea party of his Egeria (every British statesman has half-a-dozen Egerias, though I understand they are an unknown institution in America) by retailing them there with every scandalous embellishment he can lay his congue to.

dangerous. It is the custom for the City of London to entertain Cabinet Ministers occasionally at great banquets in the Mansion House or Guildhall. The wine, which is of the best, goes to the heads of the guests; and though these heads, when of Cabinet rank, are usually well seasoned, and the Parliamentary habit of saying nothing at enormous length is intensifed rather than corrected by alcohol, yet there is a real danger of indiscretion, especially as the speeches are assumed by all editors to have been meant for publication, and even to be official indications of policy. In the early years of this century a certain peer, who was then a commoner and in the Admiralty, electrified Europe by a cheerful postprandial assurance at the Lord Mayor’s table that God was in his heaven and all was right with the world because the British Admiralty could always sink the German Fleet before the declaration of war had reached Berlin. The convivial orator meant" no harm and was only making himself agreeable; but he created a panic on the Continent that raged for a fortnight. It was recalled by the Germans in 1915 to justify them in their attempts to conciliate American public opinion. But the British public never noticed the hubbub. We are sending that cheerful peer to Washington.

“Now I will not go so far as to suggest that if the American public wishes to know what is happening at the Conference it should regale the assembled diplomatists at Gargantuan banquets and call on them for speeches at dessert. Such banquets would have to be quite wet; and America has gone dry. But I am sure that in no other way is there the smallest chance of inducing the diplomats to let America know what they have been arranging with one another.” 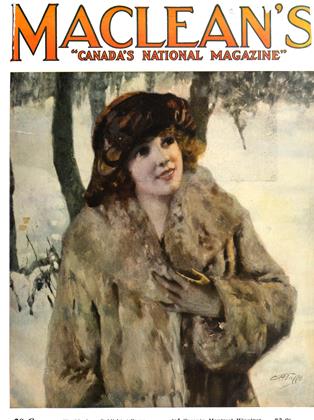