HIGHER education for men and women both is sanctioned by Professor Stephen Leacock—as long as it is not coeducation. In Collier's Professor Leacock says.

“On the basis of my experience I say with assurance that co-education is a mistake and has nothing to recommend it but its relative cheapness. Let me emphasize this last point and be done with it: Co-education is, of course, a great economy. To teach ten men and ten women in a single class of twenty costs only half as much as to teach two classes. Where economy must rule, then, the thing has got to be. But where the discussion turns not on what is cheapest, but on what is best then the case is entirely different.

“The fundamental trouble is that men and women are different creatures, with different minds and different aptitudes and different paths in life. There is no need to raise here the question of which is superior and which is inferior (though, I think, the Lord help me, that I know the answer to that too).

“The point lies in the fact they are dif-

“But the mad passion for equality has masked this obvious fact. When women began to demand, quite rightly, a share in higher education, they took for granted that they wanted the same curriculum as the men. They never stopped to ask whether perhaps their aptitudes were not in various directions higher and better than those of men, and whether it might not be better for their sex to cultivate the things which were best suited to their minds. Let me be more explicit. In all that goes with physical and mathematical science, women, on the average, are far below the standard of men. There are, of course, exceptions. But they prove nothing. It is DO use to quote to me the case of some brilliant girl who stood first in physics at Cornell. That’s nothing. There is an elephant in the zoo that can count up to ten, yet I refuse to reckon myself his inferior.

“Tabulated results spread over years, and the actual experience of those who teach show that in the whole domain of mathematics and physics women are outclassed. At McGill the girls_ of our first year have wept over their failures in elementary physics these twenty-five years. It is time that some one dried their tears and took away the subject.

“But, in any case, examination tests are never the whole story. To those who know, a written examination is far from being a true criterion of capacity. It demands too much of mere memory, imitativeness, and the assiduous willingness to absorb other people’s ideas. Parrots and crows would do admirably in examinations. Indeed, the colleges are full of them.

“But take, on the other hand, all that goes with the esthetic side of education, with imaginative literature and the cult of beauty. Here women are or at least ought to be the superiors of men.

“Women were in primitive times the first story-tellers. They still are so at the cradle side. The original college woman was The Witch, with her incantations and

her prophecies and the glow of her bright imagination, and if brutal men of duller brains had not burned it out of her, she would be in canting still. To my thinking, we need more witches in the colleges and less physics.

“I have seen such young witches myself —if I may keep the word: I like it—in colleges such as Wellesley in Massachusetts and Bryn Mawr in Pennsylvania, where there isn’t a man allowed within the three-mile limit. To my mind, they do infinitely better thus by themselves. They are freer, less restrained. They discuss things openly in their classes;-they lift up their voices, and they speak, whereas a girl in such a place as McGill, with men all about her, sits for four years as silent as a frog full of shot.

“But there is a deeper trouble still. The careers of the men and women who go to college together are necessarily different, and the preparation is all aimed at the men’s career. The men are going to be lawyers, doctors, engineers, business men, and politicians. And the women are

“There is no use pretending about it. It may sound an awful thing to say, but the women are going to be married. That is, and always has been, their career; and, what is more, they know it; and even at college, while they are studying algebra

and political economy, they have their eye on it sideways all the time.

“The plain fact is that, after a girl has spent four years of her time and a great deal of her parents’ money in equipping herself for a career that she is never going to have, the wretched creature goes and gets married, and in a few years she has forgotten which is the hypotenuse of a right-angled triangle, and she doesn’t care. She has much better things to think of.

“At this point some one will shriek: ‘But surely, even for marriage, isn’t it right that a girl should have a college education?’

“To which I hasten to answer: most assuredly. I freely admit that a girl who knows algebra, or once knew it, is a far more charming companion and a nobler wife and mother than a girl who doesn’t know X from Y.

“But the point is this: Does the higher education that fits a man to be a lawyer also fit a person to be a wife and a mother? Or, in other words, is a lawyer a wife and mother? I say he is not.

“Granted that a girl is to spend four years in time and four thousand dollars in money in going to college, why train her for a career that she is never going to adopt? Why not give her an education that will have a meaning and a harmony with the real life that she is to follow?

“For example, suppose that during her four years every girl lucky enough to get a higher education spent at least six months of it in the training and discipline of a hospital as a nurse.

“There is more education and character making in that than in a whole bucketful of algebra.” 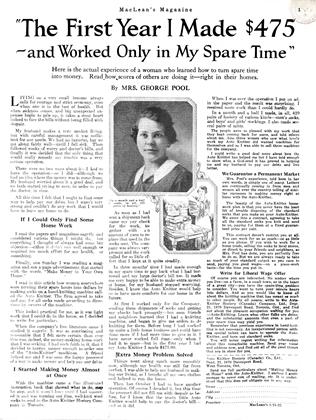