PERHAPS there is no phase of civilization which holds for womankind so many pitfalls and terrors as the administration of human justice according to the code written law. For one might say that the evolution of the civil and criminal law as recorded in the statute books is an accomplishment peculiarly masculine, and its manipulation, contortion, and enforcement, a department in which the male intellect alone can ever hope to accomplish brilliant and aweinspiring exploits.

And indeed women alone are not the only portion of society who intensely dread entering upon such transactions and enterprises as involve consultation with the law. Most people of normal attainments have a fairly keen idea as to the moral differences between right and wrong but many, nay half, the men, as well as the majority of women find themselves caught in a trap of helpless perplexity when they are called upon to order some unaccustomed business dealings in a perfectly légal manner. There are however some elemental requirements that might well be understood, for the guidance of all those eager to understand business practice, and there are just a few legal conditions governing banking and real estate transactions that could be readily mastered by every man and woman, and that would prove of some economic value to those who buy and sell rarely, and yet who can ill afford to be fleeced.

There are I think two rigid rules to which one should adhere if one is to keep clear of trouble, and at the same time keep intelligent guard over their own welfare. First never in any circumstances or under any pressure put other than your own signature to anything written. Likewise never sign at all until you read over what you are about to sign. To subscribe the name of others to any document or paper having official or legal status is to be guilty of forgery, a criminal offence which opens a ready road to penitentiary. Now almost any paper writing adopted to facilitate the most trifling business transaction may be said to possess legal significance. When you receipt bills receipt them with you own signature. When you ask for such a receipt be sure that it bears the name of the man who signs it, and that he is a responsible person qualified to sign. How many people repeatedly lose money by paying agents and clerks who are not accredited persons capable of furnishing vouchers to debtors. But it is not in these minor transactions that people blunder most grievously but in the more important matters of cheque handling and real estate documents.

I stood in a post office one day and heard an up-to-date, intelligent and properly qualified civil servant try to persuade a woman to sign the name of the male head of her household to a postal note so that he might cash it for her. When she objected he exclaimed “Why of course you can, you have his power-of| attorney. You do all his business.” But I she was wiser than he, and took the note back for the proper signature. Now if j you have a man’s power-of-attorney, there must be a proper legal document j drawn up, sworn to, and preferably registered before it is safe for you to write ! the signature of another. And even then

you invariably sign the other man’s name followed by the statement, “by his attorney,” and then attach your own proper signature. And thus if you are not a properly appointed attorney you are running a mad risk.

I saw a high school teacher, whose father ran a prosperous business, during his absence, receipt a bill owed the father with the father’s signature. But the recipient politely suggested that the pedagogue add “per” his own name, and this was willingly done. I also once saw a crown-attorney by virtue of his position try to force a legal representative, to all intents and purposes by statute empowered to act for his chief, to sign a government receipt with his chief’s signature. The Crown-Attorney was a fool, for whilst he maintained he must have the chief’s name only, he at the same time blithely offered the trust in hand to the representative if he would simply sign the chief’s name for him. The wary substitute did as requested and added “per” his own name, to the fury of his adviser. In another instance an express agent attempted to snatch a receipt for a money order from a customer who was adding “per” their own name, to that of the party for whom they had been bidden to sign.

A YOUNG girl once told me that she -¿A constantly cashed cheques made to her mother by signing her mother’s signature. And this with the full knowledge of the bank teller. Then one day a cheque was payable at another bank where the clerks were not so complaisant, and where her own signature was well known to the teller. Upon explaining her quandary to her teller in the first bank, he exclaimed, “Oh, that’s easy; give me your cheque,” and forthwith he wrote the mother’s signature himself, and off she went, and got the money. Of course her mother was well aware of the fact, and made no remonstrance, though she herself posed as a leading light in the local branch of the I. O. D. E. But that fact did not save the teller when he got into bank difficulties a few years later.

And it is true, quite painfully true, that sometimes with eyes wide open men and women, believing they are doing no moral wrong, openly and recklessly indulge in the most criminal proceedings. But sometime, somewhere the delinquent makes an enemy, a legal slip is discovered and no amount of moral rectitude will save the victim. The very men who counselled his slipshod habits will be the most horrified at his illegal and irregular signatures and his technical lapses and folly. He knew better—indeed yes— his course was plain —if he hadn’t been a crook. He committed a legal crime, whether he compassed anything immoral or not, and so he must be punished to appease the sanctified horror of his legal confrères. I have seen a man of spotless reputation stricken from the ranks of respectability and dragged through a law court by just such a travesty of justice.

Remember this, then. Sign none but your own name to anything underthesun, no matter what the provocation or what the inducement. And then above all things know what you are signing before you sign. Many hundreds of government

petitions, church movements, social reforms, to say nothing of deeds, mortgage: and even wills, bear the legal endorsatior of men and women who hadn’t the slightest intention of countenancing anything written upon the document they signed Women of course can yield to their penchant for signing any paper presented al their doors, without sometimes incurring other than a slight temporary inconvenience, but when it comes to signing lega agreements and real estate document: they should show sufficient business intelligence to know and understand exactlj what they are signing. Even the mos' ignorant male will as a rule insist on read ing and discussing the will, mortgage o: deed he is about to sign before he sub scribes to the dictates of his lawyer.

THE woman who refuses to sign thi mortgage put upon their home by he husband secures to herself a clear on: third dower in the property. But I ven ture to say few men would loan mone; under such conditions. Again and agaii have I heard women swear that certaii clauses or conditions were not embodie: in the original deed or mortgage they ha: signed some years back, but they alway failed to have in their possession a propel ly signed and sworn duplicate which, fo protection, they should have secured a the time, examined, and kept in thei possession. Indeed I have heard wome solemnly declare they had not even signe documents duly recorded with their er dorsation, and have even heard thei freely repudiate the signature affixe thereto as theirs. But the transaction always dated years back, their writin would have changed, and théy never ha evidence to substantiate their, claim: One couple were foolish enough to mak payments on a $2,200 mortgage to a accredited Crown-Attorney, on behalf his client, and to accept, from him, mailed, typed, unsigned receipt. Fiv years later this unique luminary denie his irregular receipt, and the wretche pair faced the problem of paying the; mortgage all over again. Fortunatel an entry in the man’s daybook which boi every trace of genuineness, appealed to sane and astute judge, and the frauduler scheme of lawyer and mortgagee wi balked. I was intensely interested short time since in the story of a youn couple who had bought a home and ha partly paid for it, and by the wonderfi executive ability and industry of the wil trod the bright road to comfort and sucess. But the husband was an errat and short-sighted manager, and, beir offered $500 more for the home than 1 paid, signed an agreement to sell. Fo tunately the wife wrns joint owner, ar having a mind of her own promptly r fused to sign either agreement or dee: Then a sensation developed. I mild! suggested to narrators that the deal ha fallen through. “Oh No! No!” said tl men,—“it’ll go through alright.”

“Then,” I observed, “her husband ca make her sign.”

I pressed eagerly for an explanation : to how they would manage, but nobod knew quite accurately. She wouldn sign. That was undoubted—indisputable, but somehow, someway the estate agent would manage. The buyer wanted the house, and his agreement would have to be fulfilled, no question about it. I waited interestedly for the dénouement. The general impression remained that in some absolutely effective way the law would step in, and establish a man’s right to sell his home, and move his family when and how he liked. The matter hung fire for several weeks. The sale would go through, of course it would, everybody said so. It could be managed without the woman. BUT—it wasn’t. And now the husband thanks fate his wife had so much backbone.

But the men were appalled when told that even without being a joint owner the woman might thus have held up the sale. • As a mere wife she might have refused to bar dower, and few wise, honest men would have shouldered such a cloud on title. For a woman astute enough to cling to her dower in property, at her husband’s death would probably be astute enough to collect it. 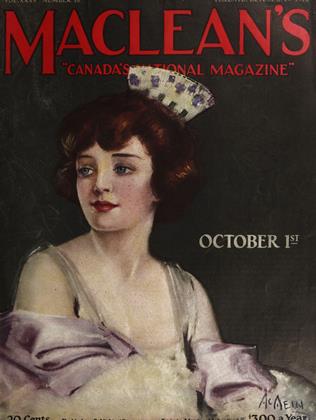