TO HAVE reached that pinnacle of success of an author in the United States that you are considered “Vogue;” when publishers are demanding that you produce more and more; when every line turned out is bought at the top figure; when your books go through edition after edition; when you just have proven your value to the moving picture world by winning the ten thousand dollar prize offered by the Chicago Tribune—then to leave suddenly and bury yourself for five years on an Alberta ranch, is the experience of Mrs.

But even the glories of honeyI mooning in the foothills of Alberta pass away, and one day Onoto Watanna left the ranch, came to the city of Calgary, shut herself up for one month in a rented room and wrote her new book “Sunny San,” some 80,000 words.

At first some of her friends and literary critics did not think it was possible to turn out a good piece of work in so short a time.

But the writing of Onoto Watanna has been unique in this respect. In fact when her vogue was at its height, a favorite joke of hers was that she used to produce a book and a baby a year.

“Me,” which appeared some years ago as a serial in the Century Magazine, and later in book form, was written at a marvelous speed. The late Jean Webster, author of “Daddy Long Legs,” who wrote the introduction of this book, says:

“The writing of this book is one of the most astounding literary feats I have ever known. It is one hundred thousand words long. It was started on Thanksgiving Day and finished before New Year’s. The actual writing occupied two weeks, the revision another two. The circumstances in which the book wa= written are interesting. The author had been wrenched from her feverishly busy life to undergo an operation in a hospital. Four days later she began writing her book. I do not think I have ever heard of a more astounding feat."

Although Mrs. Reeve made her first fame in the United States, she I was born in Montreal and now that she

has been reclaimed from her long residence in the States, she is desirous to be known henceforth as a Canadian.

Speaking of her father, who was an Oxford graduate, Mrs. Reeve says; “Prior

to coming to Montreal, about fifty years ago, Mr. Eaton and his brother Isaac were two young and ardent adventurers despatched to the Far East, there to extend t he trade of my grandfather, one of England’s greatest merchant princes. Those were the days when few men ventured into the Orient. My father had been back and forth to China no fewer than eighteen times, and during that perilous period of the Tai-Ping rebellion he had made journeyings in old-fashioned

sailing vessels, being one hundred odd days at sea at a time.

“He had a great deal of artistic ability and as a young man had taken a gold medal at an exhibition at the Paris Salon.

Grandfather, however, insisted that ‘No son of his should follow the beggarly profession of an

“He came to America towards the end of the Civil War, but lost the greater part of his fortune in Wall Street. He then came to Canada and resided here continuously until his death a few years ago.

“When misfortune overtook him, he turned to art as a means of livelihood, and his paintings became well known to Canadians some of them being bought by the Duke of Argyle and the late Lord Strathcona.”

Mrs. Reeve is one of fourteen children.

Because of the stories her father told her of Japan, this country appealed to herimagination, and it was through her novels and stories of Japan that she won her great successes.

Mrs. Reeve began writing at the very early age of fifteen. At seventeen she accepted a position on a Jamaica newspaper to cover the debates of the legislature. Owing to the excessive heat, although successful at this work, she left and took up residence in New York. After this followed a period which she describes as “starvingandwriting.”

MRS. REEVE’S best known novel is “The Japanese Nightingale,” written at the age of eighteen, and published in a most artistic edition by Harper’s. This has been translated into French, German, Swedish, Italian, Spanish and was produced as a play in England. United States and France. Margaret Illington starred in it in the United States, Marie Tempest in England, while the Comtesse de Fitte de Soney made a translation inte French. Fanny Ward later appeared in the motion picture version, and now Madame Tamaki Miura, Japanese Prima Donna of the San Carlo Operatic Company, famous for her Madame Butte-fly, is to appear in an operatic version of this story, which she has recently acquired.

Other novels by Onoto Watanna are “The Wooing of Wistaria,” “The Heart of Hyacinth,” “Tama.” “The Honorable Miss Moonlight,” “A Japanese Blossom,” “Daughters of Ni.ii.” “The Love of Azalea,” “Miss Spring Morning,” “The Diary of Delia,” “Me," “Marion,” “Lend Me Your Title,” and “Other People’s Troubles.”

There is an interesting story in the connection of the publication of “The Diary of Delia,” which is the journal of an Irish cook. Onoto Watanna grew tired of writing Japanese stories, and submitted

“The Diary of Delia” to four magazines under another nom de plume. All four promptly accepted this and it appeared some years ago in the Saturday Evening ¡ Post as a serial, this magazine learning the name of the true author later and publishing it under her pseudonym of Onoto Watanna.

Mrs. Reeve had just taken up motion picture scenario writing previous to her j coming west. The Chicago Tribune offered a prize of $10,000 for the best synopsis of a scenario for a motion picture ] serial play to follow their “Million Dollar ! Mystery” and “Diamond from the Sky.”

I Onota Watanna was awarded this prize, this serial being “Gloria’s Romance,” which starred Billy Burke.

One of Onoto Watanna’s sisters was the late Miss Edith Eaton, who under the nom de plume of Sui Sin Far wrote “Mrs. Spring Fragrance and Other Stories,” a collection of Chinese fairy tales and stories of Chinese child life, some of these being regarded by literary critics as classics. The Chinese of Montreal have erected a monument on the grave of this talented Canadian author, who is buried in Mount Royal Cemetery.

Mrs. Reeve has been twice married, first to B. W. Babcock of New York, and later to Francis F. Reeve, who is engaged on a large scale in the ranching game in the west. She has three children of “teen” age, who are in High School. 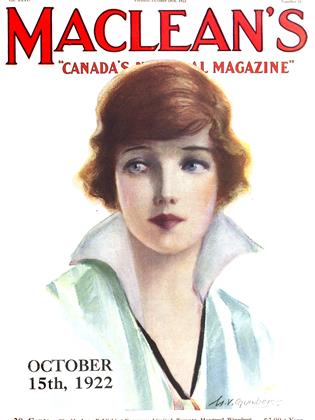