Question—Please give me your advice on the King-Kirkland gold mine. I have been Offered some shares at twenty-five cents each, and seeing that all the other mines in the Northland have turned out so well I want to get in on the ground floor. I will appreciate your advice as to whether the purchase is a good investment.—Subscriber, Sunderland, Ontario.

Answer—The King-Kirkland Gold Mine Limited is only a prospect and therefore cannot be classed as an investment. It is one of the many thousand of prospects in the Northland; a few of which, in spite of unsatisfactory organization and watered stock in many cases, have been successful. All of these stocks find their true value when listed on the stock exchange and the majority, including the leaders to-day, sell lower than when first offered to the public. We advise you to let the history of the northland be of service to you in making your decision and place your capital in the dividend-paying listed issues. You will be receiving your dividends, have the best security in the Northland and possess shares that are always marketable.

Question—I have been solicited to buy some bonds of the Hanover Cement and Stone Company. Please give me your opinion regarding the issue. Do you consider it a safe and sound investment?— Subscriber, Ingersoll, Ontario.

Answer—The bonds of the Hanover Cement and Stone Company are being placed on the market for the extension of the business and their security is only assured by the success of the concern. Many of the cement companies have been showing a steady improvement during the past twelve months chiefly on account of the many new road programs and the general activity in the building trades. The bonds cannot, however, be classed with the absolutely safe and sound investments. For a business man with a full knowledge of the company’s program the bonds offer fair possibilities.

Question—I have been offered some 7% preferred shares of the Goodyear Tire & Rubber Company of Canada. Would you kindly advise me if this would be a good investment for savings. Is the company sound, and are they paying these dividends regularly?-—Subscriber, E. A. H., Winnipeg, Man.

Answer—The back dividends of the Goodyear Tire & Rubber Company of Canada are due, and it is expected that they will be paid within the next few weeks. The company has come back very quickly during the past year, and has made a steady reduction in its obligations. As a result there has been considerable advance in the preferred st(ock which is now selling from 79 to 81. The industry is gradually getting on a better basis, and the large producers should be the ones that can best stand any price cut. The demand for tires this year has been greater than was expected. There are now so many automobiles in operation that a very much bigger market for tires exists than ever before. Another season like the present should enable the Goodyear Tire Company to work out of all difficulties which were brought on by the sudden readjustment in 1920.

Question—Why are bonds preferable to shares and what is the difference?— Subscriber, Markham, Ontario.

Answer—Generally speaking the main reason is that when you buy shares you frequently speculate, but when you buy bonds you invest. If you buy a share in a company you become a part owner in that company. If it makes profit, you are entitled to your share; if it loses money and eventually goes bankrupt, you will contribute your share of the loss. It is a speculation; you may make _ big profits or you may lose all you put into the company. If you want to sell your share you must find somebody to relieve you of your speculation. With a bond it is different. The bond states right on its

face that the concern owes you a certain amount of money—the face value of the bond. It also states that on certain dates the interest will be paid. Put in plain language this means that a bondholder will get his investment back on a certain date, but a shareholder may never get his money back. It means that a bondholder will receive his interest regularly, but the shareholder may not get dividends for years. The bondholder is always in a better position than a shareholder.

Question—What is your opinion of Mutual Oil? I have been advised to buy some shares and there is talk that the stock has a very promising outlook.—Subscriber. Sutton, Ontario.

Answer—There has beeft considerable activity in Mutual Oil during the past few months on account of an extensive program being planned by the company. It is generally considered that the outlook is promising. The stock cannot, however, be classed with the absolutely safe and sound investments but those which are classed as frankly speculative.

Question—Please give me your opinion of the Canadian Government Railway Bonds and Debentures, fully registered. Would these bonds be as good or assafe as the War Loans and Victory Bonds? I have no money for speculation but want a safe investment to provide an income for old age,—J.J.B., Wellington,Ontario.

Answer—The bonds of the Canadian Government Railway cannot possibly compare with the War Loans and Victory Bonds, although Government Railway Bonds stand very high. We strongly advise you to hold your Victory or War Bonds. You will be receiving a good rate of interest and have securities that can at all times be readily converted into cash.

Question—I am holding some preferred and common stock in Loew’s Metropolitan Theatre of Montreal. Are they likely to pay any dividends soon? Is this slock likely to increase in value? I have owned this slock since April, 1921, and have not received any dividends yet.—J. A. M., Hagersville, Ont.

Answer—Loew’s Court Theatre, Montreal, formerly the Metropolitan Theatre, is eighteen months behind initsdividends, and judging from present indications no date can be given just when dividends will be paid. A few weeks ago the stock sold for$49.00,but there is no demand and the shares are not saleable. The outlook is not very promising on account of a slack theatrical season and general depreciation of all theatre stocks.

Question—What is your opinion of the Lake Shore Mine at the present market price?—F. C.G., Trenton, Ontaroi.

Answer—The shares of the Lake Shore Gold mine are popular in the lower priced mining issues. The shares have a par value of $1.00 and during the last twelve months have advanced from $1.26 to $3.25. During a recent reaction they dropped to $2.76. There has been a considerable amount of buying of the stock in anticipation of higher pnces.

Question—I am a woman and wish to invest fifty dollars a month in some safe stocks or bonds. Please give me your opinion of the best kind of security and to whom should I apply.—G. H. E., Moose Jaw, Sask.

Answer—We strongly advise the purchase of Victory Bonds as a safe and sound investment and one suitable for your needs. You will receive a good rate of interest, have the best security, and securities that can be turned into cash at any time. Transact your business through a reliable brokerage house. Your banker will be pleased to give you a list of the leading firms.

Question—I have been solicited to buy some common stock of the Northern Power Company at par. Please give me some information on this company as a safe and sound investment.—E. F., Montreal,Que.

Answer—The Northern Canada Power Company Limited operates in the mining districts of Northern Ontario and supplies electrical power to the principal companies in the Porcupine and Kirkland Lake districts. These include the leaders, Dome, Hollínger, McIntyre and Lake Shore. Recent reports indicate that the company is operating two plants with a

capacity of 18,000 h.p., and at present completing a third plant to take care of the increased demand for power in the Porcupine district.

It is expected that the new plant will be in operation on the first of December and will have a capacity of 9,000 h.p. The latest estimate of the total earnings of the company with all three plants running is given at $110,000 a month. The issues of the company have been found in good demand and there is a feeling that the company will steadily increase its earnings and lower operating costs. For a business man with a full knowledge of the company’s program the stock offers attractive possibilities.

Question—I am holding some shares of Teck-Hughes which I bought around 63 cents a share. Will you kindly let me have some information on this slock. Would you advise me to take on more shares and hold for dividends?—S. W. P., Lucan, Ont.

Answer—There is a feeling in brokerage circles that a dividend will shortly be declared on Teck-Hughes. This report has created a good demand for the stock with the result that the price has advanced accordingly. The stock is considered one of the better stocks in the speculative class and directors claim that the outlook is very promising.

Question—I have been solicited to buy some shares of the North Trail Gold Mines. Would you consider this a safe and sound investment?—D. T.,Galt, Ont.

Answer—The North Trail Gold Mine is only a prospect and although there has been considerable boosting oi the stock there is much to be undertaken before the stock can be classed with the popular speculative issues. You would be well advised to place your capital in securities that are listed and more easily marketable until operations and developments have assured that the North Trail Gold Mines is going to be a mining success.

Question—Do you consider the shares of the Riordon Pulp and Paper Company a good investment? I have been informed that the company has been reorganized and that capital placed with the concern should show a good return within the next few years.-—N. A. T., Brandon, Man.

Answer—We will not be able to give any definite opinion in regard to Riordon Company’s securities as an investment until the terms of re-organization have been announced. These plans are not yet ready for publication, nor do we believe that they have been decided upon. In the meantime, any one purchasing this stock would be taking a considerable risk as no one yet knows, we feel, what position the common or preferred stock will occupy in any re-organization that takes

Question—Would you kindly give me some information about the Alberta Financial Brokers. Do you think investors in it will come out on top?—W. A. G., Meaford, Ontario.

Answer—Our reports regarding the Alberta Financial Brokers show that for some years stock has been sold in Eastern Canada; particularly in the agricultural districts. For a time, we understand, substantial dividends were paid but lately the shareholders have not been getting any returns and judging from farming conditions in the West and such information as we have been able to obtain, it would seem that such dividends as were paid were paid out of capital. Efforts to get a really definite statement regarding the situation have been fruitless. The meagre information we have received has not inspired confidence.

Subscribers to MACLEAN’S MAGAZINE desiring advice in regard to Canadian industrial investments, or life insurance problems, will be answered freely {if a stamped addressed envelope is enclosed), by addressing Financial Editor o f MACLEAN’S MAGAZINE. 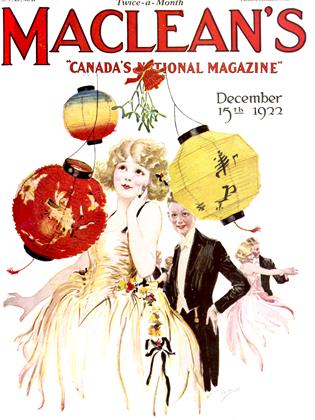