THE CONFIDENCE man is always with us. Too much publicity cannot be given to his wiles and methods of extracting money from his dupes. Whether it be mines, oil wells, inventions or sunken treasure there is a similarity in all his schemes. InCollier’s. Mr. Smith gives an outline of the methods of procedure usually adopted as they were related to him by one of the confidence fraternity himself.

Here is an instance of the usual method of starting the ball rolling :“ ‘Dear Friend: You probably do not realize what can result from the most modest beginnings. One hundred dollars invested in the original Bell Telephone stock has earned $1^00,000. The lawyer who organized the Bell company refused to take his $3,000 fee in stock at 10 cents a share. By doing so he turned down $60,000,000. .. .’

“Personally, I do not know whether the original shares of the Bell Telephone Company have increased many thousands of dollars in value. But it is fair to assume that this stock is now very valuable. That is what the silly investor assumes after I send him such a letter as that which heads this article. That is what I expect him to do. I know he will not stop to wonder through how many reorganizations, subsidiary formations, upheavals, and market storms such a share of stock must have passed in forty-five years. I know he will not remember that forty-five years makes up a very long time in the life of the individual. I understand that he will leave out the human element entirely and be dazzled by a set of figures, a brilliant abstraction.

“We are all more or less dazzled by the success of certain inventions. Many patents are issued on excellent and useful articles. If these devices were put upon the market by a well-run manufactory, with a competent sales force and backed by sufficient capital, they could surely be made to pay dividends. But my friends who hand me their money for investment in patents forget all the main elements. They see that the article patented is good, useful, spectacular, interesting, wonderful, ingenious. They forget to ask who is to bring their company through the throes of early experimentation, who is going to run the faetory, market the article, attend to the advertising, watch the income and outlay. They accept the abstract and despise the concrete. But the concrete is very hard, and it prevails.

“The victim of the inventions stock game is usually a little and often a great deal better educated than his brother of the mining stocks. Indeed, the ideal victim of the patent-device stock scheme is the doctor, lawyer, or dentist—the professional man with just enough technical training to make him naturally interested in mechanical matters.

“The con man is guided in his choice of exploitable inventions entirely by fashion or by the trend of public interest. Fifteen years ago everyone was deeply interested in the wireless. So every fake stock promoter formed wireless companies, and what a trimming of the public there was. To-day many ‘marks’' are dazzled by the fortunes that have been made in motor cars and their component parts. To-morrow it will he the flying machine.

“You will remember that many ships were sunk in the course of the late war. Many of them, like the Lusitania, carried

cargoes of gold and other permanent valuables. Ha! Here we have at once the perfect variant of the sea-gold legend, a fable made to order for the con man. We have the gold-laden ships that went down to sea and disaster from our own shores with such a clamor of publicity that a war was made thereby.

“I give here a paragraph from a sample approach letter:

“ ‘There is an almost unlimited number of sunken ships awaiting to be recovered. The ocean bottom is littered with prizes, ranging from a few hundreds of dollars to many millions. The Lusitania alone carried down eight millions in gold. In fact, the ocean bottom is to-day a gold field the like of which was never known before.’

“We could make whatever claims we liked. Who was there to refute us? So we would blithely cry in big black type that there was a billion in gold on the bottom of the sea, in shallow waters, easy to reach by means of our wonderful salvage devices.

“Here are two paragraphs from No.l of the build-up letters:

“ ‘Here is our proposition. We know where the gold is; we know how to get it out; we have the process to do it, and we are at it now. We invite you to become one of our partners in this business on a fifty-fifty basis. Since experiment and theory have given place in our venture to demonstrated certainty, you have the wonderful opportunity, while the present low price of our stock is in effect, to participate in the most promising investment of modern times—and on the ground-floor basis.

“ ‘There is very little of the treasury stock left at $2 a share—par value $10— and the price will very shortly advance to $4. This is too big an opportunity to neglect.’

“The salient parts of our second build-up letter would read as follows:

“ ‘Supposing your father had got in on the pound floor—as you can here—when Bell invented his telephone, Singer his sewing machine, Westinghouse his air brake? Where’d you be now? Would you be working for a living? You would not.

“ ‘Don’t let fear hold you down. The greatest enemy of the human race is fear. If all fear could be removed from the human mind, civilization would progress by leaps and bounds. It is this specter which holds so many people down. It causes more suffering, more loss, more misfortune, more failure than anything else in life. You see in life just what you look for. It depends on your lenses. If you want to see gloom and failure, that’s up to you. But we see a billion dollars’ worth of gold rolling into our treasury from the bottom of the sea, and you can have part of it if you don’t let fear hold you back.

“ ‘Time and tide wait for no man. Our treasury stock is being quoted still at $2 a share. It will positively advance to $4 within sixty days. Buy all you can. Buy till it hurts.’

"Once more, these fascinating lines are not of my authorship. They are merely slightly altered to fit this particular scheme. By the time his second letter has been digested the replies are sure to come in. Usually the suckers who rise to the bait ask merely for more information, but dozens also may send in their checks and money orders.” 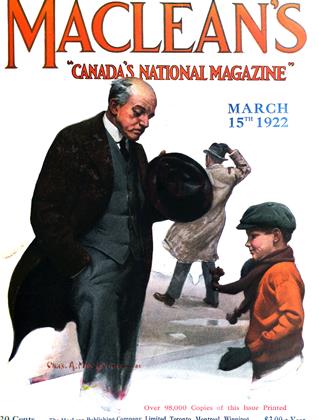