TO HAVE written books that have been translated into many foreign languages, including Chinese and Bulgarian, as “Beautiful Joe” has been translated; to be one of the very few Canadian authors who are in “the million class,” and to have been the subject of a poem—surely this were enough to turn most heads, but not that which is levelly poised on the shoulders of Marshall Saunders.

One night, not very long ago,

I accepted Miss Saunders’ invitation to come and see her in her own apartment home.

“I’m at the Aberdeen Club, you know,” she informed me.

“It was built by the City Housing Commission—cosy red brick apartments down in the hollow on Bain avenue, and they are charming—designed after the English style. I’m in number 14.”

Aberdeen club, climbed one flight of stairs and found Miss Saunders. She led me into her sitting room, and that room, and the one adjoining it, which I glimpsed through the open door, were a veritable reader’s sanctum, for books lined the walls, and titles of classics, volumes of poems, by authors old and new, essays, letters, from great men to their wives, or to other great men, books of animal life, of nature study, of travel, of biography, and many of fiction, tantalized with their promise, and lured one toward the comfortable chair drawn invitingly near to the softly shaded lamp.

For a while we discussed books. “Beautiful Joe” came into the conversation, and from the name of that immortal, crop-eared dog, it was but a short step to the realm of animal and bird life. I confessed to a hankering for a view of the study where Miss Saunders wrote the stories of bird and beast, and with a twinkle in her eye Miss Saunders graciously consented to take me up to her “garret study.”

Beckoning me to come, she opened the door leading to the attic, and as my eye followed her directing finger I saw what appeared to be the tail of a common street sparrow.

“Wake up, Foxy, I’ve got company and I’m going to work,” cried Miss Saunders, and immediately the tail switched out of sight, and there pivoted into view a dark little head, beneath which was the dark feathered “bib” which denotes the male

WITH Miss Saunders leading the way we went up stairs, passed by Foxy on his perch, and entered the study where

dictionaries, paper, reference books and a typewriter testified mutely to the serviceable character of the room.

Miss Saunders sat down at her machine and began to type. There was a soft flutter of wings, and Foxy lighted near by, and then the concert began. With a noise which, though it came from his throat, can be likened to nothing but the process of

sharpening a saw, Foxy sang an accompaniment to the rattle of the typewriter keys, and Miss Saunders explainedthatthis was quite according to custom. Foxy is in love with the clash of the keys, and no matter at what hour his mistress decides to work, Foxy is on the job, to cheer her with his buzz saw melody.

“The children about here all know me,” said Miss Saunders, “and they know that I love animals, so if a dog or cat or horse or bird is hurt, they ring my bell and beg my assistance. In the Spring, they find many tiny birds which have fallen out of their nests, and they bring them to me to care for. That is how I got Foxy—but Foxy won’t go away. He goes into his big cage to eat and drink, but sleeps on that perch in the hall, and lives a happy life here.”

Billy Sunday, Miss Saunders’ dog, who had followed us upstairs and fallen asleep by the radiator, began to snore at this point.

“This room is really more like a menagerie than a study, during the day,” laughed Marshall Saunders. “Billy Sunday snores by the radiator, Foxy flies about chirping, and my canary in her cage screams to her mate whom I take down-stairs because he sings much better when he is away from her. You know, birds sing better when they are miserable.. .and do you know, Foxy has learned several of the canaries’ notes? There is nothingthe matterwith the little street sparrow’s vocal apparatus at all,” she insisted as I laughed incredulously, “he’s coming on fine, and he’ll sing some day.”

Going back downstairs again, we drew our chairs up to the fire and “talked shop.”

Unlike many writers who begin with the simplest themes, and work into the more complicated, Miss Saunders, I learned, began with melodrama, and it is interesting to listen to the story of how she’began to

“It was my father’s dearest friend, the late Dr. Hand of McMaster University, Toronto, who induced me to choose writing as my life work,” she said. “I was skeptical of my qualifications, but Dr. Hand persisted, and one day, oh so many years ago, when my parents were away from home, I decided to take the plunge.”

MISS Saunders went on to say that when she solemnly asked her younger sister Rida what she should write about, that waggish maiden flaunted Dr. Hand’s suggestion that the subject be a charming bit of scenery, the track of a rabbit in the snow, or something equally natural and unobtrusive, and demanded that Marshall write something full of “blood and murder—lots of blood, people like that sort of thing.”

So Marshall took her sister’s advice, and for three weeks she labored over a story of burglary and violence, omitting only the blood from the original order.

“It was a story about Spain, a country of which I knew little, and of unhappy marriage of which I knew less,” smiled Miss Saunders, thoroughly enjoying the reminiscence. “It was full of quotations and I called it ‘A Gag of Blessed Memory.’

I sent it to the Frank Leslie Magazine, (now known as the American Magazine,) and to the amazement and delight of Rida and myself a cheque came flying back— a cheque for forty dollars!”

“Rida and I had jubilant calculation,”

knitted the author of “Bonnie Prince ;tlar,” “forty dollars for three weeks’ ark— forty dollars every three weeks for ie rest of my life—! And then at last y attention fell on the animals at my feet, id I wrote‘Beautiful Joe’.”

Miss Saunders was born in Nova Scotia, daughter of the Rev. Dr. E. M. Saunders, mself a writer, and early in her literary ,reer she felt the need for travel, and with ir sister visited many of the far-away nds across the sea. In addition to her >oks she has written many short stories id articles, and for some time was a regar contributor to the columns of the alifax Herald.

Joe Was A Real Dog

EAUTIFUL JOE whieh has sold more than a million copies, is the story of an -treated dog, the original of which wasborn

Meaford, Ontario, and which actually id its tail shortened and its ears cropped ; a cruel owner. It is interesting to know lat a new edition of “Beautiful Joe” is in ■ocess of preparation, and that more lan twenty thousand words have been ruck out of the original edition.

“I am a systematic person, or try to be,”

said Miss Saunders. “I like to write in the mornings, take the afternoon for recreation, and use the evenings for studying, correcting copy, etc. I don’t write much in the summer, but travel, and collect color and material, and write during the Autumn, Winter and Spring.”

“ ‘Beautiful Joe’ came out in 1894, but I had been writing on and off before that. I had had one novel printed in England, called ‘My Spanish Sailor,”’ continued Miss Saunders. When asked which was her favorite character she debated a moment before answering. “I think that perhaps I like Tilda Jane best,” she said slowly, “although of course I love Joe.”

Miss Saunders is settled in Toronto now, and her latest books, “Golden Dicky,” and “Bonnie Prince Fetlar,” stories of a bird and of a Shetland pony, are not provingany less popular than the lucrative Jce.

And more beautiful than Joe, he of the mutilated body and marvellous soul—is the little dog Billy Sunday seen in the picture with Miss Saunders,—whose great love for animals is not confined to the pages of her books, but overflows into her every-day life, as witnessed to byher silvernoted canaries, Billy Sunday, and Foxy, the saw-sharpening songster. 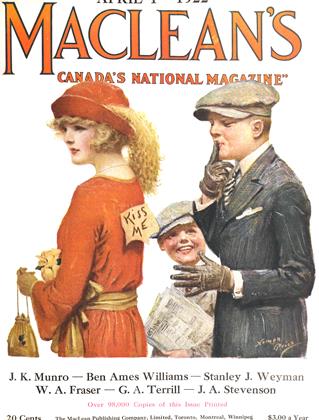