AFTER MORE than two hundred years of obloquy, Captain Kidd, the terror of very young youth, the idol of growing boys, has stepped out as a misjudged gentleman, who suffered persecution and death because of his upright character.

Despite the wide series of romances that paint him as a bloodthirsty pirate, a view even held by no less a historian than Lord Macauley, it seems that there are definite grounds for believing that all this tradition of crime and violence and hidden treasure has been manufactured out of whole cloth. Joseph B. Gilder writing in the New A ork Outlook contends that “almost all literature— whether history, legend, fiction, or verséis a tissue of falsehoods in so far as it touches upon Kidd’s character and career. For he was not only not a pirate, but he never buried so much as a dollar’s worth of treasure. And as for Gardiner’s Island, where the bulk of his fabulous fortune is generally believed to have been iiidden, he never once set foot upon its storied shores.

“A master mariner of unblemished reputation, duly commissioned to cruise against and capture French merchantmen and pirate ships of all nationalities, Captain Kidd did his best, in extremely trying circumstances, to carry out his instructions from the British Government. He had the personal backing of the King of England and the chief members of his official household. They were, in fact, his partners; for the undertaking, though launched in part under the seal of the Admiralty and in part under the Great Seal of England, was really a private one, all the partners save his Majesty, and possibly Lord Bellomont, risking good money in it in the hope of handsome returns. The King himself, though he failed to keep his promise to invest, arranged none the less that he should have one-tenth of the profits.

“This was more than the Commander himself was to receive, though he was to bear the burden and heat of the day. His investment, moreover, was £600; and he was put under bonds in the sum of £20,000 to be faithful to his trust. Livingston invested the same amount as Kidd; and he too was bonded, though for only half as much as his protégé.

“Kidd asked for a man-of-war and 150 trusty fighting men; but none could be spared from the war with France, and so the Adventure Galley was built for him and a crew of civilians picked for her with the utmost care. Early in the year 1696 the vessel dropped down the Thames to the Nore; and there a pressgang boarded her and took off nearly all of her handpicked men, to replenish the personnel of his Majesty’s fleet! By heroic efforts Kidd in a few weeks succeeded in scraping together a handful of men to replace the larger force that had been ‘pressed;’ but the material was of inferior quality and the number far below what was needed for the purposes of the voyage. It thus became necessary to cross the sea to New York, there to refill the vacancies in his

“This accomplished, Captain Kidd sailed by way of the Madeiras and the Cape of Good Hope for the island of Madagascar—a favorite rendezvous of the banditti of the seas; but when he arrived there, a year after his departure from England, the pirates were away, plying their lucrative trade in the Red Sea and the Indian Ocean.”

Pursuing them thither, as Mr. Gilder relates, he was faced with a series of difficulties, and misadventures that gave the excuse for his persecution. The East India Company, on what evidence is not known, charged that he had taken by piracy a vessel of the subjects of the Great Mogul, to the great detriment of the company. Without waiting for word from Captain Kidd he was at once branded an arch pirate.

Meanwhile his crew, disgusted by their commander’s refusal to turn pirate when it had proved impossible to make a satisfactory killing by adhering to the terms of his commissions, had at first mutinied, and then deserted him to cast in their lot with a notorious pirate chief at Madagascar. By this time the Adventure Galley, having become unseaworthy, was abandoned and scrapped. Captain Kidd thereafter sailed for home in the Quedah Merchant, one of the prizes that he had found sailing undçr French passes, and had consequently captured. When he got to the West Indies in 1699 he

learned of the charges against him. A goodly number of his crew deserted, it was impossible to bring this vessel north, so he left it in what he considered good hands, and buying a small vessel sailed for New York.

“Captain Kidd felt justified in regarding the Earl of Bellomont, then Governor of New York, not merely as a partner, but in a sense as a friend, as he had been introduced to him under friendly auspices in London, and it was by him that he had been engaged to command this unfortunate expedition. Hence, on receiving the

Governor’s solemn assurance that if he was not guilty of piracy he might safely come into port, he promptly did so. The Earl had, indeed, pledged his 'word and honor’ to ‘perform nicely’ what he had promised to do by way of aiding Kidd to clear himself. But no sooner had he lured the man within his reach than he caused him to be arrested, manacled, and thrown into jail, and subsequently to be shipped to England for trial, for the reason that piracy was not a hanging offence in America!

ing the unfortunate mariner. The hue and cry against him—if it had not, indeed, been started for that very purpose—had provided the Tories with a welcome stick with which to beat the King’s Councillors, all of them Whigs of the highest standing. The Ministers, for their part, sought safety in denouncing their gallant partner as one who had betrayed a sacred trust, and for whose misdeeds they were in no way responsible. The East India Company again, anxious to control the policing of the Eastern seas for their own purposes, had done what they could to forestall his expedition three years before, and by their later accusations had brought him to his present pass. So Captain Kidd, the Scottish-American sea-farer, had now become a man without a country and virtually without a friend.”

“He was astounded to learn that his alleged crime was not piracy, but murder. To this charge, which had never been hinted at before, he had of course prepared no defence. He frankly admitted that he had struck down the ringleader of the mutineers in the course of a quarrel about the man’s insolent and insubordinate words and deeds, but that the act was wholly unpremeditated. This, indeed, was clearly indicated by the weapon used —an iron-bound bucket (“of the value of eightpence”) which happened to be within reach when the quarrel occurred. Sundry indictments for piracy followed, on all of which, as well as on the charge of murder he was tried, convicted, and sentenced to be hanged, his execution following a fortnight later (May 23,1701.)

“The retinue of lawyers for the prosecution were not more obviously determined that Kidd should die than were the judges who condemned him. After the first hour or so of his trial, the two learned counsel who had undertaken to defend him abandoned him to his fate, having probably discovered, or been advised, that it would be judicious to do so. But the presiding judge admitted that if the evidence the prisoner sought to introduce —namely the French passes carried by the ships he had taken-—had been produced in court, it would have cleared him of the charge of piracy. In making this admission Chief Baron Ward could hardly have been unaware that this evidence, turned over to the Admiralty by Parliament for use at Kidd’s trial, had been deliberately suppressed. It was not only within reach at the time, but has been carefully preserved for over two centuries, and may be seen to-day at the Public Record Office in London. _

“The only direct evidence against Kidd was furnished by two of his old crew, who, having deserted him and turned pirates, saved their own lives—as he himself put it—by swearing away his. A number of military officers testified strongly ini hw behalf; but their testimony to his high character and efficient services as a fighter for the King in the West Indies some years before was brushed aside as irrelevant.

“The opponents of Kidd’s great partners had done their best, while he awaited trial, to get him to say that lie had been prompted to turn pirate by his associates, particularly Lord Chancellor Somers, or had been promised a pardon if he should do so. It was represented to him that his life would be spared if he brought such accusations and stuck to them, and that it would surely be forfeited if he refused; but he steadfastly resisted the temptation to perjure himself, even though he was assured that two of his great backers were ‘restless to have him hanged.’ His reward for this magnanimity was to be called a fool, as well as a knave.’ '

“During his trial, the Admiralty failed to break down his defense. That defense was that such irregularities as were committed by the men nominally under his command were in direct opposition to his orders. At Madagascar, when he tried to get them to take the pirate ship to which they shortly afterwards deserted, they said that rather than fire one shot into the pirate they would fire ten into him.

“Kidd was neither a knave nor a fool, but a capable and honest man caught in the vortex of a bitter political quarrel between the foremost men in England. The Tones sought to have him condemned in order to discredit the Whig 'leaders; and the latter were quick to repudiate him and anxious to have him swing, for they wanted a scape goat, and Kidd served the purpose to perfection.” 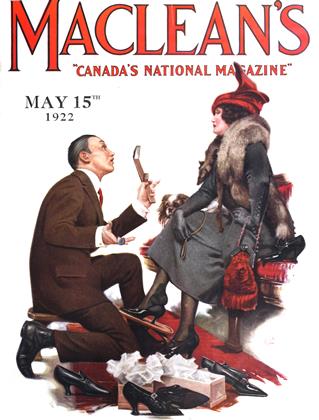