“I KNOW of no more fascinating story of human endeavor,” says Mr. Bell in an article in The Fornightly, “than the story of Marshall Lyautey’s great work in Morocco. The full story cannot yet be told but if the hero is permitted to continue his labors for yet a few more years, France is destined to possess one of the greatest of the world’s colonial assets.”

After leaving college Lyautey’s inclination was for a literary career but the Franco-German War of 1870 led him to embrace a military career. He soon made a reputation as a pacificator and in 1911 after recognition of France's protectorate over Morocco he was appointed Resident Commissary General and it fell to him to quell the disorders which had arisen.

“The real work of General Lyautey now began,” continues Mr. Bell. “A man of prophetic vision, he grasped the potentialities of his task—the pacification and the development of Morocco. It was a task after his own heart, and right blithely did he set about it. A country more vast than Algeria had to be subdued, and for this task there were only a few thousand rifles at his disposal until reinforcements arrived. There were ugly rumours that a general rising was in preparation, and he had the feeling that he had landed in an enemy country. On the same evening that he was presented to the Sultan at Fez the fighting began, sho's reaching the quarters where he was temporarily lodged. Gouraud, the one-armed general, who did brilliant work in the last stages of the Great War, with Generals Monier and Brulard, put down the insurrection. Then the voice of Lyautey, the diplomat and the administrator, was heard. The establishment of the French protectorate was not an excuse for annexation he declared; it was a case of loyal co-operation between the Shereefian and the French authorities. Native religion and civilization would be respected. France was bringing help to Morocco, not domination. In the troubled periods which followed Lyautey, whose roles was that of an organizer, a pacificator, seized every opportunity of emphasising this declaration of France’s intentions. In a short time the three capitals, Rabat, Fez and Marrakesh, were mastered, and things were settling down so well that by the end of November, 1912 Lyautey had prepared his plan of organi; zation. If he could not have reinforcements he must have financial help, and he boldly proposed the substitution of an economic for a military policy.

“By September, 1913, there was a French chamber of commerce at Casablanca, and in the following month Rabat had its court of appeal. Trade began to boom. An enemy of protection and a stickler for the principle of commercial equality, Lyautey by his genius in creating order and confidence had doubled the foreign trade. At Casablanca British commerce had leapt from over two million to over fifteen million francs. The Resident-General was guided by the maxim that to work with the natives and the colonists was the true principle of colonisation. When a number of French deputies went to Morocco in the autumn of 1913 to see things for themselves, to ascertain what Lyautey was doing, they found ample proof that the protectorate merited the credit of France, and it was authorized to raise a loan of 170 million francs repayable in seventy-five years. General Lyautey had won a civil victory. He was greatly heartened, and applied himself to his task with more confidence then ever.

“With all his success Lyautey had has his cruel moments, his disillusions. The Great War brought them. When France realized that she had to fight for her very xistence she eould not keep many troops

in Morocco. It was, indeed, decided to withdraw from Morocco, and Lyautey received orders from the Foreign Office to fall back on the coast, bringing all Frenchmen and foreigners under French protection with him. For him the national defence came first; but while he decided to send the maximum of troops to France, he also came to the decision to keep Morocco at all costs. With the handful of men remaining to him the chain of outer posts was held. The French colonists came to his assistance and formed themselves into five battalions of reserves. The expected attacks came soon enough, for German propaganda was busy in Morocco. Germany had, in fact, made up her mind that Morrocco was as good as lost to France. But Germany was disillusioned in Morocco as in the other countries against which she had made war. The attacks, from whatever side they came, were beaten off. Morocco was

“While cannon were booming on the European fronts, Lyautey, with tranquillity restored for the moment in Morocco, resumed his economic activity. In the occupied territory the war gave him that freedom of action which had been denied to him in peace time.

“He was called to Paris at the end of 1916 to take the position of War Minister but resigned in March 1917 and returned to Morocco.

“Lyautey’s return to Morocco was hailed with satisfaction. He took up the threads of his interrupted activity and did his utmost to forget that he had ever been War Minister. The passing of M. Painleve from this post and the advent of M. Clemenceau increased his burden of responsibility. Clemenceau made a personal appeal to him for aid in officers and men, and again, without demur, the Resident-General responded to his country’s needs, though he knew that trouble would follow the depletion of his forces. The German agents were on the alert. Another opportunity presented itself for planning an attack. It was prepared and carried out; but, like their previous efforts to destroy French authority and influence in Morocco, it failed. Nevertheless, the dissident chiefs had hopes of starting a holy war, and became so inconveniently active that there were moments when not only the security of Morocco but that of Southern Algeria was compromised. In the hard fighting that ensued ' Lyautey took a hand in directing the operations, which were crowned with success.

“His ten years in Morocco is an amazing record, a monument of energy, resourcefulness and intelligence. Take the military part of it. The operations began from west to east with Casablanca as the starting point in 1907, and from east to west towards Oudjda. In 1908 the Chaouia, the Labat, Bou Regreb and the Beni Snassen were occupied, and in 1910 the Algerian frontier up to the Moulouya was rectified. Fez was freed from besieging tribes in 1911, and the massacres of April 1912, were followed by the dispersal of the rebels and the occupation of Safi to Mazagan, Taza, Meknes and a portion of the Zaians.

“During the war the sixteen territorial battalions sent to replace the thirty-six regular battalions which went to France safe-guarded the situation. What Lyautey aimed at was to make secure the region between the Middle and the Great Atlas, the sources of the rivers Moulouya, the Sebou and the Oum R’Bia, the first entering the Mediterranean, the others the Atlantic; for this meant the development of irrigation and the electrification of railways. During the recent visit of the President of the Republic he was able to announce to French journaliststhat the

situation in the south was excellent, that for 180 miles on the other side of the Great Atlas there was not a single post or a single man, and that this represented a saving to France of 250 million francs and 30 battalions. Altogether France has employed 85,000 men in the pacification of Morocco, while in a zone infinitely more restricted Spain has employed from 120000 to 130,000 men. It is an interesting fact that of the 8,000 volunteers of the Foreign Legion, 6,500 are Germans. Lyautey hopes to finish his work of pacification by the end of next year.

“From 1907 up till now the cost of the pacification of Morocco has been under a milliard francs, a very low figure as compared with the military expenses involved in Algeria for the same period. To make Algeria the colony it is to-day an expenditure of no less than seven milliard francs has been necessitated. Lyautey has taken care to have clever financiers and economists on his staff. It has been his aim to make the protectorate provide its own needs in the matter of organization, and it is his proud boast that its budget suffices. The budget was 19 millions in 1912, but to-day it is 300 millions. Morrocco raises its own loans, and has no need to have recourse to the guarantee of France.

When we come to the development of Morocco we have eloquent proofs of the success of Lyautey’s policy of insisting that organization should go hand in hand with pacification. Nearly 2,000 miles of roads over which heavy traffic can pass have been made. The working of the 800 miles of narrow-gauge railways has yielded receipts amounting to 49 million francs. The ports are being rapidly developed, and in time Casablanca will have a basin of about 90,000 hectares, almost quadruple that of the Joliette at Marseilles. It has cost 90 million francs, and its traffic puts it in the sixth rank of French ports.

“Tremendous progress has been made in the development of agriculture. Of 10 million hectares, two and a half millions are cultivated, and a similar extent will soon be worked by the most modern methods.

“True to his ideal of what he conceives to be the real colonising spirit, Marshall Lyautey will not tolerate the destruction of things which would interfere with tradition, and therefore disturb the native mind. And so the old cities have been kept intact, modern townships springing up near them. French justice is established all over the territory, and a system of education, in keeping with the requirements of the population in the newlife that has been opened out for them, has been put into operation. The education is Franco-Arabian in character, and is conceived on a plan to facilitate the transition of the Morocco of the past to the Morocco of the future—to the Morocco which responds to the dream of Marshall Lyautey.

“This dream, this vision, did not take shape when Lyautey first arrived in Morocco. It was born long before that period, before he ever thought of going to Morocco. He gave expression to this ■magnificent conception a quarter of a century ago when passing through the Red Sea. In a letter to his sister he wrote:—-

“ ‘You know what I desire to be and to do, and in what direction I believe I have an imperious mission to fulfil. . . to establish a continuous and regenerative current of life between France without and France within, which may be for her the awakening of physical fruitfulness, economic activity, extensive commerce, the spirit of enterprise, the awakening also of generous thoughts, of vast desires and large judgments on the world and on the nations which people it—this is my aim, and it is worth the sacrifice of many things.’

“There we have the faith of Marshall Lyautey, which has enabled him to win so significant a victory in Morocco, and to show to the world that an officer can do other things besides directing battles.” 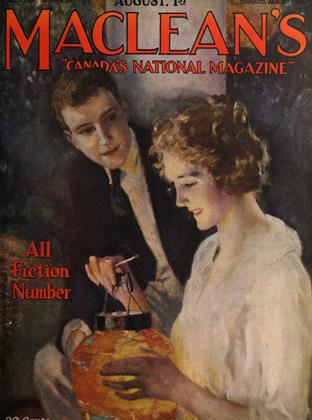