“THE times,” writes Stephen Leacock in Collier’s, “are out of joint. The ordinary business man, trained in a sturdy creed that has generations of evolution behind it, hangs on and hopes for better times. He cherishes the idea that the present troubles are no worse than the past, and in his dreams he sees them vanish in a single night and ‘good times’ returning like the rising sun. The pessimist shakes his head and talks gloomily of the collapse of our civilization and the prospect of our being engulfed in communism or overwhelmed by a vast onslaught of the colored races.

“No doubt the truth lies somewhere between these two extremes. It always does. We are not going to be engulfed and swallowed up by either the brown races or the red idiots. But we are none the less in a bad way, and our troubles will not vanish like bad dreams—or at least not without an effort of an extraordinary and exceptional character.”

Before the days of commissions of inquiry and a general spirit of public interference with commerce and industry, Mr. Leacock points out, it was considered laudable for a man to promote enterprises that helped the world in general and made him wealthy and influential as well. Reviewing the effects of that bygone attitude of the masses, the well known Canadian author, who, in this instance, writes in a serious vein, goes on to say:— “Under the stimulus of this the wheels of industry hummed. Factories covered the land.^ National production grew to colossal size, and the whole outer world seemed laid under tribute to the great industry. As a system it was far from perfect. It contained in itself all kinds of gross injustices, profits that were too great, wages that were too small, and all kinds

of fortuitous gains that corresponded to nothing at all except sheer good luck or the gambler’s chance. At times it even ran to an extreme. Great fortunes were made by men whose methods fell short of criminality only by the technical nicety of the law. What was worse, the system evidently did not mean, nor was it ever likeiy to mean, prosperity or even comfort for all. In spite of the splendor of th e foreground, poverty and destitution still hovered behind the scenes. But such a it was, the system worked; and it was the only one that we knew.”

The older way of being good was by “much prayer and much effort of one’s soul,” he emphasizes. To-day, he informs us, as a short cut to morality, our legislatures are “turning out moral legislation by the yard.” In the face of this, he finds that the world, from a standpoint of morality, is really growing worse. Incidentally, unemployment springs up as a periodic evil—the world is out of work. There is a concrete reason and a moral to be drawn from this latter-day situation:— “The world is out of work for the simple reason that the world has killed the goose that laid the golden eggs of industry. By taxation, by legislation, by popular sentiment all over the world, there has been a disparagement of the capitalist. And all over the world eapital is frightened. It goes and hides itself in the form of an investment in a Victory Bond, a thing that is only a particular name for a debt, with no productive effort behind it and indicating only a dead weight of taxes. There capital sits like a bullfrog hidden behind water lilies, refusing,to budge.

. Hence the way to promote prosperity is not to multiply our present government departments and government expenditures, nor to appoint commissions and to

pile up debts, but to start going again the machinery of bold productive effort. Take off all the excess-profits taxes and the supertaxes on income and as much of the income tax itself as can be done by a wholesale dismissal of unnecessary government employees and then give industry a mark to shoot at. What is needed now is not the multiplication of government reports, but corporate industry, the formation of land companies, development companies, irrigation companies, any kind of corporations that will call out private capital from both its proud and its humble hiding places, offer employment to millions and start the wheels moving again.

“The thing to be done, then, is to ‘fire’ the unnecessary government officials and to bring back the ‘profiteer’—or, no, let me alter that, not to bring back the ‘profiteer’ himself—let him stay in his penitentiary—but to bring back the spirit of enterprise and effort of which, after all, he was only a distorted and misshapen form. What we want is not the old profiteer, but a profiteer of a newer kind: a man with capital, much or little, and the energy and the determination to stand on his own feet and not sit in the lap of a government department. Under such terms there is no reason why we shouldn’t all be profiteers—why we shouldn’t organize ourselves into whole nations of them.

“A few years ago a man who made a lot of money in anything approaching a Christian fashion, and with anything like a spirit of fair play to his fellow men in the doing of it, was designated a captain of industry and a nation-maker. Why not? But nowadays the voice of the man standing upon the soap box has become so loud that the very word ‘capital’ is dis»

credited. Rushing from one extreme to another, the same people who enthroned the ‘nation builder of a few decades ago denounce him now. Wealthitself becomes an object of suspicion. All profits are presumed to be ill-gotten.

“I declare that if we can find no better way of attempting to restore prosperity than by the endless multiplication of government jobs, it would be better for us to bring back even the profiteer himself and ask him to rule over us, to fetch him from the Riviera, from his country place on the Hudson, or from whatever spot to which he has withdrawn with his tin box full of Victory Bonds. If need be, we should go and pick him out of the penitentiary, take the stripes off him and tell him to get busy again; show him the map of the world and ask him to pick out a few likely spots. The trained greed of the rascal will find them in a moment. Then write him out a concession for coal in Asia Minor or oil in the Mackenzie Basin or for irrigation in Mesopotamia. The ink will hardly be dry on it before capital will begin to flow in: it will come from all kinds of places where the government could never coax it and where the taxgatherer would never find it. Only promise that it is not going to be taxed out of existence and the stream of capital which is being dried up in the sands of government mismanagement will flow into the hands of private industry like a river of gold.

“But how much better to let the profiteer stay in his penitentiary and take over the job ourselves; put ourselves into it with as much of the old reliant spirit that built up American and British civilization as we can find surviving still among us, and make things more in earnest.

“Come, let us take our coats off.” 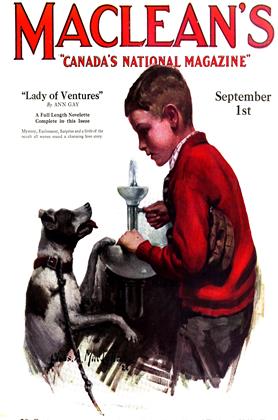