HEREWITH are shown for the first time photographs from an almost unbelievable wild animal sanctuary,a place in real life as wonderful as Pros-

pero’s Island in the “Tempest,” a dot of rocks and trees off the Coast of British Columbia, known as Hardy Island. Here a lonely man, shy, and so retiring as to forbidmention of his name, has shown himself to be a real wizard of the wild by succeeding in getting on terms of friendship with absolutely wild deer. Not a few" of these shy, timid creatures, but hundreds!

Passing on the News

He is possessed of some peculiar occult gift found occasionally among human beings which has aided him in his tenyears’ of laboring to make his little island a wild deer sanctuary.

Even the great bucks of the coast deer species, born and matured in the wild are yet absolutely at ease in the presence of this one man.

He has built near his house outdoor tables, Where deer foregather to dine.

'T' HAT animals A communicate with others of their species has been established by various naturalists. This fact is most strikingly p r o ve n on Hardy Island, for where only a few deer were here when the man arrived

a decade ago, now hundreds come annually from the nearby much larger Nelson Island and from the mainland where they are hunted in, and out,^oî season. That the first visitors to the island, finding a friend and protector, told others cannot now be doubted in view of the number of animals which come here in the breeding season and to have their young. They are numerous also during the shooting season. In the early summer the yard is often cluttered up with fawns and they become actually a nuisance to this one man who has gained their love and trust.

In one of the photographs is shown a group of young bucks and does feeding near the wizard’s house upon a treat of orchard prunings. At the sight or scent of a stranger they would vanish.

The deer come and go from the island at will. The fact that absolutely wild deer by the hundreds have now learned to make use of Hardy Isalnd makes the man’s achievement probably the most

remarkable instance of its kind in natural history. “They have the whole of British Columbia to roam in,” the wizard told your correspondient. “and they come and go as they please.”

Though on terms with this one man, once away from him they are as wild as ever. Though well fed at the open air tables which are a feature of the only deer restaurant in the world, some deer come to the door and knock writh their head or horns, or pull at the knob with their teeth to receive extra tit-bits such as raw oatmeal and apples. One great buck came every night for a period of a year, always after dark, often getting the man out of bed. It must have learned this from some other deer, for it was born in the wild and fully matured before it came to Hardy Island. This is only one example of deer intelligence, and communication. 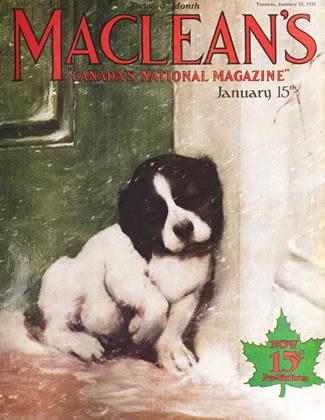