EXPLORERS and traveling spacewriters seem to be vying with each other these days in bringing conviction to the reading world that the far North of this continent is not cold and that in matter of civilization it can in many ways show a higher form of law and order than the East and South. Each in his turn has had his little slam at the novelists and short fiction writers who have inferred that the North is cold and rather inclined to be wild and woolly. Now comes Sherman Rogers, industrial correspondent for The Outlook, who warns tourists going to Alaska to take along their B. V. D.’s. instead of woollen underwear and heavy mackinaw reefers.

Mr. Rogers’ very interesting article is largely devoted to telling of the immense resources yet to be developed in Alaska, and in that respect reads much like an attempt at colonization propaganda. He gives some racy incidents in proof of his declaration that Alaska is not cold:—

On a scorching hot day in July, while strolling through Fairbanks, Alaska, at noonday, I suddenly noticed a sight so ludicrous as actually to bring tears to my eyes. Behind a barn, in the blazing sun, stood three touristswearing heavy parkas. They were furred from head to foot, as if for a final dash to the Pole,and werestanding alongside a dog-sled; perspiration was rolling down their faces in streams as the grinning camera man took another picture of the frozen North. The thermometer, right at that moment, must have registered fully 90 deg. I could hardly believe my eyes; and then it suddenly dawned on me how Alaska tourists obtain the photographs that flood the States.

“What’s the big idea?” I asked one of the gentlemen who had just removed his Arctic costume.

He fairly sputtered with anger.

“I live in Boston,” he snapped, “and for many years I have wanted to make a trip to Alaska. I wanted to see Eskimos in their igloos. I wanted to see snow-covered wilderness in summer. I w'anted to see some wild Alaskan life. And here I am in Fairbanks, five hundred miles in the Alaskan interior, and it’s hotter than it was in Boston; cowbells wake me up at night, and I’m nearly chloroformed by the aroma of strawberry patches, flower gardens, hay meadows, and grain fields. Do you see any Eskimos around here? Why, the only time these interior and southeastern Alaskans see Eskimos is when they take a trip to the States and go to the circus. And, to cap the climax, at dinner last night, in a cafe just as modern as the cafes in Boston, I found Fairbanks-grown tomatoes and Fairbanks-raised strawberries on my bill of fare; and this where fur-coated Eskimos are supposed to be chasing polar bears over fields of ice.”

“Well,” I finally managed to interrupt, “does that disappoint you?”

“It certainly does,” he answered heatedly. Then he added: “I am delightfully disappointed. But the folks back East won’t ever know it. I’ll send them this photograph, and they’ll think I am standing abaft an igloo, and I guess that’s the way everybody else that has come up here has been ‘kidding’ his friends back home for the past fifteen years.”

The Bostonian was right. I don’t suppose there is a tourist visiting Alaska who is not delightfully disappointed when he encounters the same B. V. D. and outingflannel climate he left back in the States. Certainly the Alaska immortalized in novels is an entirely different country from the land we still call, in some parts of the States, “Seward’s Folly.”

Back in 1849 California was supposed to be wild, and I suppose Alaska was about the same kind of a frontier twentyfive years ago; but there is nothing within the territory to-day to substantiate the wild stories written about the early days of the gold rush. As for night life in Alaska, it compares favorably with that or the most strait-laced New England towns. There is certainly no place in the United States where there is better order, or, rather, where there is less disorder, than in this territory.

In considering Alaska we must hear in mind that it is really composed of three empires—southeastern, the interior, and northern. Northern Alaska has Eskimos, polar bears, walruses, and other Arctic life that we have read so much about. The only trouble has been that most people in the States have not been able to discriminate between Arctic Alaska and temperate Alaska. Point Barrow, where Arctic life exists, is as far removed from Fairbanks, Anchorage, Seward, Ketchikan, or Juneau as Labrador is removed from Miami, Florida, both climatically and geographically. An Eskimo walking down the streets of Fairbanks would cause a riot. If he appeared in Juneau, he would be a seven-day wonder.

I met a family in Juneau that had formerly resided in Cleveland. I asked the lady of the house if it wasn’t somewhat difficult to stand the rigors of the northern climate. She laughed outright.

“Well,” she answered, “we endured Cleveland winters, and Juneau is certainly a paradise compared with Cleveland either in winter or summer. We have been North eight years in all; spent five winters here, and three back home; the five years we have lived here during the winter months the thermometer has never reached zero. Do you imagine it takes a rigorous person to stand such a climate?”

Mr. Rogers appeals for more attention from Uncle Sam in colonizing Alaska. The one thing the country needs badly is better roads. He devotes a very large portion of his article to the mineral and timber resources of the country, particularly referring to the opportunities afforded for the development of the pulp and paper industry, admitting, however, that our owm Great Lakes timber territory produces better quality than Alaska.

He believes Alaska presents a brilliant opportunity for reforestation methods. There will be a perpetual supply of timber in Southern Alaska he states, due to the heavy rainfall and the peculiar nature of the soil. It seems that it rains there most of the time, and he tells this story in connection with that feature:

A missionary had rounded up the natives around Ketchikan, in the early days.

and, after opening up the Sunday meeting informed his Indian congregation that he would use as his text the story of Noah and the ark. After assuring his hearers that after forty days and nights of rain the earth was flooded. The missionary was interrupted by an old wrinkled Siwash. “Did you say that it rained for

forty days and nights, and the whole world was flooded?” inquired the Indian. “That’s true,” replied the missionary. “Heap big lie,” grunted the disgusted redskin. “It’s rained here both day and night for forty years and no flood yet.” 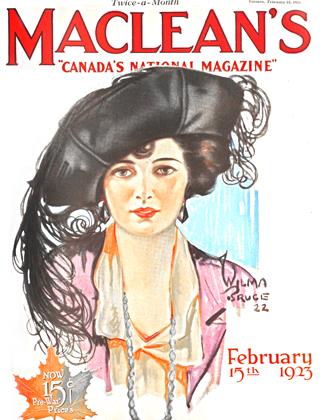