“THE Hidden "Menace” of Germany’s

secret plans for another conflict with France is described in the London Magazine by Valentine Williams, for many years foreign editor of the London Daily Mail, and for more than two decades a foreign correspondent of note. Mr. Williams’ article has an especial interest for MACLEAN’S readers, as he wrote, amongst other bits of stirring fiction, “The Yellow Streak” which appeared serially in this magazine in 1921.

Four years after Germany’s beaten legions were heading homeward in disgraceful and disorganized flight, Mr. Williams states, Germany is again building her military machine. We are witnessing to-day a military revival in Germany that, if unchecked, will undoubtedly become the greatest menace to the world’s peace, since the old German army went down in the smoke and flame of the Hindenburg line.

It is not something new’, Mr. Williams contends, it is an exact parallel of the rebirth of the Prussian army after its defeat by Napoleon. Then Prussia’s army was limited to 42,000 men. yet exactly seven years later a greater army, raised by precisely the same methods that Germany is using to-day. appeared, as if by magic, and defeated Napoleon at Leipzig.

The Junker class will not submit to the loss of their old prestige. They are supported by all the reaction ary opinion, and backed by the old regulars throughout the Empire. The loosely-worded clauses of the treaty of Versailles are being constantly over-ridden. The old army uniforms are out again. Old regimental traditions are fostered. Parades are held to commemorate their foundation days. Old regimental messes still meet weekly or monthly, and the Kaiser’s health is drunk in costly wines. And everything is done to keep alive the old idea of military dominance. The official head of the militia may be a civilian, but his officials are old regular army officers. Mr. "Williams goes on with his indictment:

Ever since peace wa3 signed, the Reichswehr Ministry has, with unblushing effrontery, set itself sedulously to the task of evading Germany’s obligations under the Treaty. These, to recapitulate briefly their gist, impose on Germany the abolition of conscription, the limitation of the armed forces of the Reich to 100,000 men recruited on a voluntary longservice basis, the surrender of all munitions of war surplus to the quantities laid down under the Treaty, the dismantling of fortresses, and a whole series of regulations intended to frustrate the creation of masked armies out of customs officers, coastguards, and the like; or by military training at the universities or in veterans’ clubs, shooting societies, and similar organizations.

The supervision of the fulfillment by Germany of the military articles of the Treaty is entrusted to the Inter-Allied Control Commission.

Within the measure of its ability the commission has done its work well and expeditiously. But at every turn it has encountered the hidden hand of the

Junkers; in every way its investigations have been hampered by the tricks, evasions, and lies of the German military authorities. Its members have been insulted and actually assaulted in the endless searches they have had to conduct of the caches of arms located all over Germany. Its efficaciousness is largely circumscribed by the fact that, on so many heads of the military clauses, the only guarantee of fulfillment is;the-word of the German Government, which experience has shown to be utterly worthless.

The rejuvenation of the Prussian Army after Jena was achieved by means of the so-called “Krumper System,” by which the cadres that formed the army of 42,000 were constantly renewed. Present-day Germany has, for the moment, no dearth of trained men. The aim of the military authorities is, therefore, to keep as large a force as possible as a standing army of instructors, a skeleton force capable, at short notice, of expansion from a great masked reserve in the background.

miniature of the old German Army. Divisional staffs are corps staffs in miniature, just as a regiment is a division in miniature.

The question of the Security Police is at present the most acute issue between the German Government and the Control Commission. The force was formed after the Armistice throughout the Empire on the pretext that it was required to guard against the reactionary and Communist disturbances which have sporadically recurred since the establishment of the Republic. This force of picked men, estimated as at least 150,000 strong, is nothing but a second standing army, armed with rifles and bayonets, handgrenades, machine-guns, and even some artillery. The men live in barracks under military discipline. The Germans have strenuously resisted all attempts of the Allies to compel the demilitarisation of this highly-trained body and impudently demand that Prussia alone shall retain no fewer than 75,000 of these police as a State force. Large bonuses are offered to young men to join the force on their discharge from the army.

Great attention is being paid to the formation of a masked reserve. Generous doles maintain intact the bonds uniting the ex-Service man with his old corps. Grants amounting to three-quarters of full pay are now made to every officer or man leaving the army after four years’ service, whether this has been with the old army

or the new, the police, or one of the numerous volunteer formations in Republican Germany. This munificent pension is deferred, not cancelled, when the recipients find civilian employment.

Though many of the splendid barracks in which the old army was housed are standing empty throughout Germany, the German military authorities are busy building new barracks for the Security Police, thereby clearly demonstrating their intention to restore, at a given moment, the army barracks to their original purpose. _ Expenditure such as this, coupled with the huge sums swallowed up by the army doles, accounts for the thought-provoking fact that Germany is spending to-day on her army of 100,000 men four times what her old standing army of over a million men cost her.

The irregular formations known as the “Free Corps,” that sprang into being, under Junker leadership to crush the Communist disturbances in Prussia and Bavaria, are the backbone of Germany’s masked reserve. The famous Einwohnerwehr, or Civil Guard, reckoned at a strength of 250,000, was ultimately demobilised and disarmed after strong pressure from the Allies. But its headquarters it is said have merely been transferred to Innsbruck, where an Austrian General, Kraus, supported by General Ludendorff, directs its destinies.

Bavaria, where ex-Crown Prince Rupert struts it openly as the “unofficial king,’’ and Wurtemberg, another bogus republic, are to-day the strongholds of Junker reaction in Germany. Officially, the Einwohnerwehr may have been suppressed, but its members, the hardy South German peasants, still assemble regularly for their shooting matches and drills, and turn out in large numbers behind uniformed officers at church and military festivals. Many well-informed observers of the march of events in Germany believe that the danger to the rickety republic threatens not from the Communists, with which the German Government is always trying to make our flesh creep, but from the South German reactionaries, who will venture a coup on the pattern of the Italian Fascisti.

The bad faith of the German Government has been abundantly proved in this matter of the surrender of guns alone. Apologists for the German Government allege that the authorities cannot be made responsible for arms, explosives, and even aeroplanes hidden on the Junker estates where, undoubtedly, huge supplies are still safely concealed. But what is to be said about the 600 howitzers discovered at the Rockstrok works at Heidenau in Saxony with documentary evidence to show that the guns—10.5 howitzers—not only were manufactured after the Armistice under Government supervision, but were retained under Government orders, at the factory instead of being despatched in the ordinary way to the Spandau arsenal? Under the Peace Treaty Germany is entitled to have only S4 of these howitzers.

This brings me to another most disturbing factor of the new German menace. The secret manufacture of arms and explosives is actively going forward, not alone in Germany, but also in certain parts of Russia, where German influence is increasingly powerful. The Germans, in particular, are devoting their whole attention to the replacement of man-power by other agencies—the crucial lesson of the last war. Experiments are going forward

in secret with poison gas, pilotless aeroplanes, and electric machine-guns, and, though one has heard nothing about it, no doubt the improvement of the tank is also being undertaken. In a recent article the Times drew attention to the increasing importance attached by the German authorities to the manufacture of nitrogen, the basis of all explosives, ostensibly for the production of nitrogen fertilizers for intensive cultivation.

The Versailles Treaty abolished, by a stroke of the pen, the German army and naval air forces. But the German Air-

men’s Union keeps the spirit of Richthofe and Immelmann alive, while service with the Bolshevik and Kemalist armies gives the German ex-army pilots the opportunity for retaining and widening their knowledge of this all-important branch of modern warfare.

To the Briton the war is a closed chapter, the Versailles Treaty the “Finis” written at the foot of the last page. It is time for him to realize that to the Junkers who run Germany to-day the Treaty is a dead letter, the war but a first instalment of a story which has yet to be written. 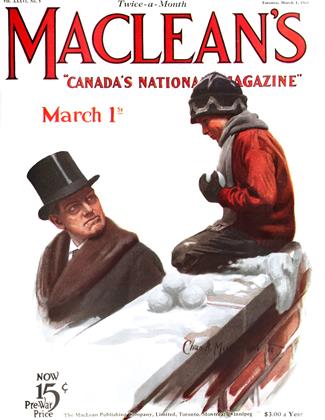