THE only funny thing about being a writer,” wrote Henry Kitchell Webster, “is being one.” Which remark led the New York Times to gather a number of humorous personal incidents from wellknown U. S. authors.

“My funniest experience as an author happened recently,” said Henry James Forman. “A bird with a lugubrious look was *wandering about in a reception room at a large public dinner. And some one introduced us.

“ ‘But I thought,’ he said, fixing a melancholy eye upon me, ‘that you sank with the Lusitania.’

“I explained that that was poor Justus Miles Forman. That I was Henry James Forman. But evidently he was paying heed to his own sad thoughts rather than to me.

“ ‘No,’ I told him, T was lost, with all hands. But recent diving operations— you understand—it’s a case of salvage,’ and he looked after me mournfully as I left him.”

Ellis Parker Butler: “When you ask a humorist to tell his funniest experience as a writer you come to the wrong man. Humorists don’t have funny experiences: It’s the serious writers who have them. You might as well ask the Eskimo to give his opinion ofthe cold—the poor thing would look at you in amazement. He’s so used to cpld that he doesn’t know it is cold.” Robert W. Chambers took his pen and wrote: “My funniest experience, I think, is with the perpetual ánd congenital solemnity of the American public.”

W. L. George told this experience: “A little while, ago I received from an English lady a present of three pairs of silk stockings. With these came a letter in which she said that she had greatly enjoyed my new novel ‘Her Unwelcome Husband’ and that she felt in me a sister spül. She went on to say that it was women such as myself, for she addressed me as Miss George, who were going a long way toward making men understand the inwardness of the

feminine mind. So greatly did she feel this that she hoped I would accept a little Christmas present, namely three pairs of silk stockings. She was also kind enough to add that she had bought them at a certain store, which would exchange them if they were too small for me. Why my admirer should assume that I was a woman some of my readers may have a theory about. But why she should assume I was a woman of large feet I don’t know.

“I can only say that that was what Thackeray used to call a thorn in the cushion.”

“You want to know what’s funny about being a writer,” began George Allan England. “I don’t think there’s anyt1 ing funny about it. I think it’s all prettytragic. But the funniest thing that ever came to my attention, in connection with this business, was when a young man, just out of college, came to me a year or so ago. This young man wanted me to tell him how to bécome a writer.

“ ‘Why do you want to become a writer?’ I asked, indulgently patting him on the head.

“ ‘Well/ he said, blushing coyly, ‘to tell the truth, Mr. England, I’m not very energetic. I’m looking for a nice easy job. Father says that I haven’t got brains enough for business, or law, or insurance or the ministry. Só I thought I’d like to be a writer.’

“I won’t spoil this by adding anything. Let it pass as a gem of the purest ray serene. And here’s hoping you have a bang-up time at the dinner, all you successful writers who know how easy, how very easy, how superlatively easy, how damned easy the job is.”

George Barr McCutcheon for years has been studying over a joke of his own.

“I think the only really funny experience I ever had,” he wrote, “was when the first publisher accepted my first manuscript. The laugh, you will admit, was on me, when I tell you that I sold the book for $500 cash. The name of the story was ‘Graüstark.’ ” 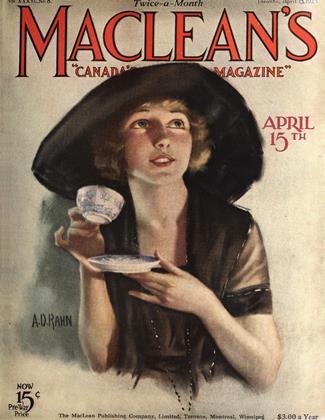