"WILT thou love, honor and KEEP him, in sickness and in health and forsaking all other keep thee only unto him so long as ye both shall live?” “And the woman shall answer: 'I will'.” So reads the marriage service, but behind the soft mist of her veil, with the scent of orange blossoms in the air and her new-made husband at her side, a girl seldom realizes the practical significance of that word “Keep.” She doesn’t realize, at that stage of the game, that it is but a part of the word housekeeping. Nor in the days before the wedding, when she thinks of housekeeping, does she think of it in terms other than those of the speckless aluminium and oven glass with which she has been “showered.” If the thought of preparing a meal or setting the table does come, it is so tinged with the romance of the period through which she is passing that the betting is even she sees herself and her beloved as the central figures in a first evening in their own home picture, with a Cluny cloth on the polished table and roses trailing across it from the silver centre-bowl.

The Cluny cloth may materialize,

even the roses may appear upon occasion, but man cannot live upon a diet of love, lace, and roses.

And—every man has his pet aversions and his special delights, so the wife, who would strive to make a thorough success of the serious job of housekeeping, will discover, early in her married life, what foods her husband does and does not like.

It is so easy to begin housekeeping on a business basis. List the foods your husband doesn’t like, and avoid serving them as carefully as your husband avoids showing plaid ties to an Irish buyer. Treat your house as your business, and make it show a profit in appearance, in atmosphere, and in happiness.

Here is a dinner menu composed of some of the dishes which have proved such prime favorites—taken separately or together, that I have dubbed them “Home Hasteners,” and when I particularly wish my husband to come home early I drop a hint that it wfill be a “Home Hasteners Dinner,”—and he comes sniffing in at the desired time.

Cream of Pea Soup: To one can of

peas add one small onion eut fine and a cup of hot water. Cook until the peas are tender and then nib through a sieve. Melt one tablespoonful of butter in a double boiler and work into it a tablespoonful of tlour. Add one scant pint of milk and cook over water until the mixture thickens, and then add, gradually, the fluid w hich has been forced through the sieve. Bring to boiling point and serve with crackers, or croutons.

ham well and stick into its surface a dozen whole cloves and the same number of pieces of stick cinnamon. Boil in covered tin. allowing half an hour for each pound, and when done smear with brown sugar moistened with butter, and put in oven long enough to brown, but not long enough to dry out. Half an hour should be sufficient.

Oven Baked Beans: Soak one half

pound beans over night and let them remain in the water until an hour and a quarter before desired. Then boil for three quarters of an hour, drain thoroughly, place in oven dish, and season with pepper and salt. Add several small pieces of the ham fat, sprinkle lightly with brown sugar, dot with butter and brown for half an hour in the oven. Serve with vinegar, or plain if preferred.

1 outer leaves from as firm a cabbage as you can procure, and, using a very sharp knife slice it as fine as you possibly can. Place these shredded particles in cold water and allow to soak for a couple of hours. Drain and place in the bottom of a salad bowl and cover lightly with a dressing composed of: one cup of granulated sugar, one tablespoonful flour, one dessertspoonful mustard, a dash of cayenne pepper and a quarter teaspoonful of salt. Blend these thoroughly together, add one well beaten egg, onehalf cup vinegar, one-half cup milk, a small piece of butter. Mix thoroughly and cook over slow fire until the mixture thickens, stirring constantly.

Coffee Cream: Bring to a boil a cup

and a half of strong clear coffee, (strained) and pour it over the well blended mixture of two egg yolks, one-half cup sugar and one quarter teaspoonful salt. Put back over fire and allow this mixture to boil gently for five minutes, stirring constantly. Then add one-half cup rich milk in which has been softened a half envelope granulated gelatine. Let this boil up and then take off the fire, pour gradually over the stiffly beaten whites of the eggs, beat until the egg white is absorbed, add one teaspoonful of vanilla and pour into a mould to harden.

Hard Sauce: Into a tablespoonful of

butter, when melted, beat the stiffly beaten white of one egg, and add confectioner’s sugar until the desired consistency is reached. Add a pinch of salt and half a teaspoon of vanilla.

In many homes, however, it is not the preparing nor the planning of the main items of the meal, which grows wearisome 7—it is the eternal hunt for something new in the way of desserts. To some men that word dessert has only one meaning— and that is pie, and for the cook in his home I would suggest a new filling which provides a delicious escape from the monotony of apple, rhubarb, raisin, and custard. It is called butterscotch, and is made by rubbing together a cup of brown sugar, two tablespoons of flour, two tablespoons of butter, and the yolks of two eggs. To this add gradually a small cup of boiling water, and cook until clear. Cover the bottom of your pastry shell with thin slices of banana, cover this with butterscotch filling, and ice with the whites of the eggs. Brown slightly in the oven and allow to cool before serving.

_ A dainty dessert is made by taking a pistachio jelly powder, and adding to it the juice from a tin of grated pineapple, plus enough water to make up a pint of fluid. Bring the fluid to boiling point and pour over the powder, stirring gently until the powder is entirely dissolved. When this is beginning to set add to it the drained pineapple, a cup of marshmallows cut in quarters, and a cup of whipping cream beaten very stiff. Put in a cool place and allow to set and serve cold garnished, if possible with creme de menthe cherries and rolled nuts. 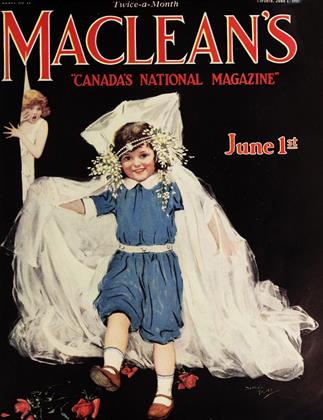