WHEN SHE REQUIRES A NEW DRESS OR HUBBY WANTS ANOTHER SUIT, SHE BUYS RAW WOOL AND WEAVES THE GARMENTS ON OWN LOOM GERTRUDE E. S. PRINGLE July 1 1923

THERE was a sudden lull in the afternoon tea conversation and a soft, well-modulated voice with a distinct English accent was heard to remark: “Yes, I wove it myself.” Mrs. H. H. Stansfield dropped her very blue eyes down at her dress and raised them a moment later to her husband who sat across the room. “I weave my husband’s clothes, too,” she added and her eyes sparkled at the sudden interest that her words kindled in the other guests. Good naturedly, enthusiastically, accurately, she answered the questions that descended upon her in a flood. Then she removed a silk scarf from around her neck and passed it among those who had gathered about her. It, too, was a specimen of her hand-loom and banded and fringed at each end with forget-me-not blue silk. Exquisite thing

of shining gold, a complete contrast to her pretty home-spun, one-piece dress.

“I learned to weave in three lessons, so you may know that it is not difficult,” she explained. The average person can not learn to weave properly in less than six lessons and in most cases twelve, and from this we may know, too, that Mrs. Stansfield has a special gift for this line of work. Her husband’s suit, she said, had been worn steadily now for two years, and it was virtually as good as new. It is almost impossible to wear out homespun, she explained.

A visit to Mrs. Stansfield’s home the following day revealed many evidences of her industry and artistic taste. Two soft, colored rugs on the floor of the living-room used for years, were standing the time test of her hand work well. Beautiful towels brought forth from the linen closet were woven in fine huckaback design. Others were done in a plain weave with colored borders. Flax is not grown in Canada to any extent and the linen thread imported from Ireland is very expensive, wrhich makes the weaving of towels unsatisfactory and discouraging, she explained. Other beautiful fabrics in the form of wool-and-silk

sports scarves, sixteen inches wide and two yards long, fringed at the ends, woven in a blend of color, were draped over the backs of a chesterfield and easy chair. Their glowing hues made them decorative, and protected the fabric of the chair in an unobtrusive way that hid their real purpose. A particularly pretty scarf was of navy-blue wool and rose silk, with threads of heliotrope. In this case the warp was wool and the weft of raw silk, and the ends were completed with fringe. A geometrical pattern carried out in sky-blue and deep beet color stood out boldly in another scarf.

A DISTINCTIVE piece of dress apparel was a jumper blouse, made of white mercerized cotton woven on the loom in the piece, and banded in a

Roumanian design, the colors of which were purple and electric blue. After the weaving was done, the jumper was cut out and sewn up, and only the waist band had to be added to complete the design, the rest of the trimming having been woven into the material in the form of bands down the middle of each sleeve and across the neck line.

“It is so necessary to have a keen color sense in order to get the right results,” declared Mrs. Stansfield, pointing out that the blue silk threads on this jumper, when combined with the purple, took upon themselves a green cast. Certainly this weaver of beautiful fabrics possesses this sense and through all her work sounds a definite note of harmony, her color combinations hold an attraction and are pleasing to the eye.

A dress of putty-colored wool, woven

in diagonal weave,.with weft pattern of purple and mauve stripes, looked cosy and pretty. The colored stripes adorned the edge of the skirt, sleeves and the V neck, which to soften its outline had a little vest of white cotton, woven in delicate colors in a design so fine as to look almost like needlework. Four pounds of fine, soft wool were used in it, and one day only was consumed in weaving it after it had been set up, in the loom. The most elaborate silk scarf, the design and color of which vied with the imported Roman ones, entailed one day’s work, including the setting up.

To weave enough cloth for a man’s suit of clothes calls for seven pounds of wool, which must be of soft quality but of firm twist. Mrs. Stansfield has found some difficulty in procuring wool of this description, for most yarn obtainable in Canada has not been twisted enough to give it the requisite firmness. Mrs. Stansfield is of the opinion that this could be remedied by home-grown fleece being treated in this way.

The wooden loom she uses, she brought from the old country, where it was made by a carpenter who took a Norwegian loom for his model. On one of her looms there are six foot treadles. Two are used for plain weaving, and all six for making patterns. Used in conjunction with the loom is a large wooden warping mill, which rotates on a pivot and does not look unlike a clothes dryer with its four wings extending from the centre.

While hand-looms of this type are not manufactured in Canada, a good carpenter can easily copy one, and the cost should not come to more than $130, including the warping mill and everything necessary. A variety of looms are made in the United States, but Mrs. Stansfield advises some knowledge of them before buying. She tells of one model imported for a group of workers in Toronto which was found to be only suitable to weave such coarse fabrics as carpets. The Norwegian model loom can turn out all grades of weaving from a fine silk to a floor rug.

IN ONE of the pictures Mrs. Stansfield is seen seated at her loom in a little booth, wearing an appropriate Old English costume, and with specimens of her handicraft on display. This was taken in England at an Arts and Crafts Exhibition. The photograph showing this energetic little lady at her spinning wheel is illustrative of her thorough mastery of the entire craft of weaving, for she can take the fleece direct from the back of the sheep, wash it, dye it, spin it, weave it, and fashion it into wearing apparel. There is one specimen of her work of

which she is particularly proud. It is the first piece of weaving she did—a cream homespun skirt. She stood beside the farmer watching him while he sheared the sheep, then purchased the wool, and made the skirt. It has been worn for five years and shows no signs of wear, and it has kept its shape. Mrs. Stansfield’s tranquil, happy expression shows that such work does not impose half the strain that bridge-playing and the constant search for amusement do upon their votaries. “What appeals to me most,” she said, “is the fact that there is so much to show for the time I spend.” Mrs. Stansfield declared that this interesting, practical and creative work for women on farms would solve their problem of how to use their winter leisure hours profitably. “There would be some encouragement,” she said, “in raising sheep could the farmer and his family reap the benefit of warm, attractive clothing, produced at a little more than the cost of labor, instead of having to buy back their own wool converted into clothing and pay a fancy figure for it.”

It is Mrs. Stansfield’s idea that women in the country could form groups, secure looms and other necessary equipment and arrange for a competent instructor to teach them how to weave. In this way they would soon get back the initial expenses involved by the saving, or even money-making programme that would result. In the Province of Quebec the habitant women have built up a weaving industry whose products are in demand, even beyond the confines of their own country.

Sometimes it is well to start weaving with a small inexpensive table-loom on which it is easier to learn. A small handloom will enable a worker at least to discover if she had special aptitude for the womanly craft of weaving.

But not only the country woman, but the city woman, would benefit by a knowledge of weaving, and the ability to create many beautiful and useful things. Mrs. Stansfield hopes to start classes in Toronto next autumn. “I want to bring hand-weaving within the reach of the people with modest incomes,” she said, “who desire individual clothes that will last and not get out of date. Anyone who weaves her own clothes will spend less and look more individual, with a charm that no fashion plate will ever

Mrs. Stansfield who was formerly an energetic worker for women in England, is an avowed feminist whose great object is to help her own sex to realize the possibilities of art in their everyday life. Her husband, Mr. H. H. Stansfield, is an artist who teaches the applied arts in the Ontario College of Art. 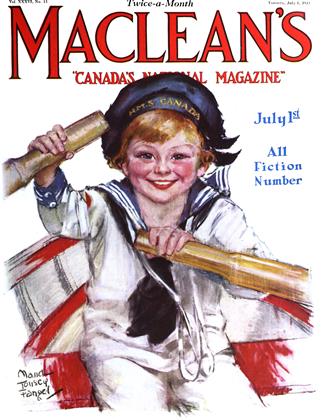