IT WAS Elbert Hubbard who once wrote that there was only an imaginary mountain between the masses and the so-called classes—that they lived in thought in opposite valleys—and if they could both be persuaded to meet and know each other in the mountain tops every so often, misunderstanding, hatred and class war would die certain death. Charles M. Schwab, the American magnate and captain of industry, is one who has put the Hubbard theory into practice with remarkably successful results. Schwab is tc-day known among work-

men as “Charlie” Schwab, which is one sure indication of his popularity. It was not always so, Sherman Rogers, writing for The Outlook, tells his readers. This was how it came about, according to Mr. Rogers:

There was a flurry in the Seattle shipyards during the earlÿ days of the American participation in the world war. The yard bulletins announced that Charles M. Schwab would speak to the shipyard workers a few days later. The announcement brought no enthusiasm, but criticism aplenty.

I was working as ship fitter’s helper. On this particular morning, when the bulletin boards announced the coming of the great steel king, the crane gang sat down opposite me and started to talk: “So, the great labor hater is coming. The great catspaw ofMorgan is going to speak in the shipyards.” “A lot of nerve,” came the answer. “I suppose he’ll get up and turn around so that we can admire his plutocratic opulent personage.” “Yes,” chimed in another, “we’ll give him the razz; that’s what we’ll do. If he talks five minutes he’s lucky. I suppose he’ll feel good looking over four thousand working slaves.”

And so the talk went on. There was lots of it during the following week in the yards. No one dared to defend the steel man. That would - have been an admission of subservience to the chief panjandrum of capitalism.

Finally the great day arrived, and in the centre of an open space of the Skinner & Eddy yards a platform was erected. At the sound of the noon whistle all to a man dropped their tools, hurried out to lunch, and then congregated around the platform. Four thousand men were there, and very sarcastic remarks were audible.

Finally Mr. Schwab was announced, and as he stepped on the rough rostrum quiet reigned. “Looks human,” I heard on my left. And then Mr. Schwab started to speak. Before he had talked five minutes the sneering grin had left the faces of those radicals nearest me who had voiced such vigorous disapproval of the steel man’s coming. In less than ten minutes Mr. Schwab had captivated the entire audience. Chter after cheer broke out.

A few minutes later I turned to v.ew the assemblage, and I noted the. jvery one was gazing intently at the speaker, and I could see that every one of them was filled with admiration. But Mr. Schwab was speaking, not for himself, but for co-operation. He was appealing to the best there was in man. He had torn aside the cobwebs of suspicion, the veil of misunderstanding, the barrier of class distinction. Before the speaker closed his voice was slightly shaky. He

had bared his thoughts; four thousand men saw the heart of the great steel man for the first time in their lives; they were completely won by his unaffected friendliness, by his contagious personality. As Mr. Schwab finished his address the men sent up a yell—a wild, ear-splitting shout of friendly approval.

Probably about thirty minutes veas the length of time it took four thousand men to reverse completely all of the opinions they had gained in years of prejudiced reading and hearing prejudiced speakers; yet in thirty minutes years of hatred and hard feelings toward the steel man had melted, and in its place vigorous loyalty and friendliness were plainly manifested.

As the men went back to their work it wasn’t “Mr. Schwab.” No, all remarks w'ere centred on “Charlie.”

The crane gang came around about fifteen minutes of four to pick up the steel plate. The ship fitter I worked for sang out: “Well, w'hat do you think about Schwab?”

“Some man. A regular fellow. Eighteen karat gold,” and then the climax—“If the balance of these magnates we hear so much about are like ‘Charlie,’ a lot of these agitators are crazy.” “Maybe he was kidding you,” the ship fitter flung back. “Kidding nothing. Let me tell you that that man meant every word he said. Sincerity stood out on all corners. That fella couldn’t be wrong if he wranted to. You can tell a good gold piece by its ring, and, believe me, that fella Schwab is all gold. There ain’t no lead in his make-up at all.”

A shrill whistle announced four o’clock. Tools were dropped, and as we reached our lockers my -hip-fitter boss looked at me a moment, and said: “There you got it, son—personal contact. Now% why in the world don’t these big fellows come around often where we can see them, feel them, judge them? Here’s a man that probably half the boys working here were ready to chase out of the yard when he mounted that platform. In about half an hour’s talk he had not only killed all that prejudice, but every man in the bunch is rooting for him like they would for a home-run hitter.” 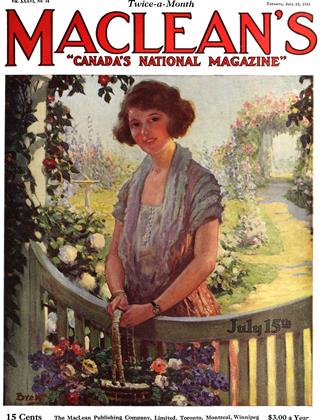