FOR the first time in the history of world fairs Great Britain, France and other European nations will make representative organized exhibits this year at the Canadian National Exhibition. A new building has just been completed for this display. The Federation of British Industries, representing millions of dollars of British industrial capital, is bringing over sixteen distinct lines from forty-five British firms. France is sending Paul Balbaud, formerly a Professor in the University of Toronto, and now the Hon. Councillor of French External Trade to Canada, with a long line of exhibits. A warship will sail direct to Canada from Cuba laden with agricultural and manufactured products. The Congress of Cuba has appropriated $25,000 to make the Cuban Show a success and if it proves up to their expectations President Zayas has promised to recommend $150,000 for the erection of a national building on the Canadian grounds. Mexico will also hold a place in the International building. One of the attractions will be President Obregon’s own band, which numbers more than 300 pieces and is famed for its excellence the world over.

This gathering together within a single building of the products and representations of far away nations is a remarkable feat, and is an unusual opportunity for those who want to become well-informed on home and foreign affairs, whether they be social, agricultural, political, professional or industrial.

Nearly two centuries ago, on the spot where the impressive exhibition buildings now stand, the first trading post in Upper Canada was erected by the early French settlers for the purpose of retaining the trade that had hitherto been carried on by the Indians around the lake. These traders became in the habit of calling the post “Toronto”—“The Place of Meeting.” To-day it is “the place of meeting” for peoples from all parts, and is one of the most cosmopolitan places in the world during the exhibition. Just to be among the people who gather there is an education in itself. They meet from all quarters of the earth. They gather there and, regardless of their nationality or class, they are always able to find, without vigilant search, a home touch, a key note to their own nation, an “open sesame” to their particular interests. Even those who come from the old countries across the sea find unexpected and familiar things to greet them in a strange land. A young Italian, who had been in Canada only a few months and was sick at heart and lonely for his native land, stopped before the big fountain in the Exhibition park. His dark eyes suddenly shone with a wonderful light—the light that leaps from the soul of a man when he meets a real friend unexpectedly, whom he never thinks to see again. He turned to those about him.

“Where, oh where,” he exclaimed, “did they get that fountain? It is my own, my ver’ own!” and impulsively he threw open his arms to it. Those to whom he had addressed himself in these impassioned tones thought and stated quite frankly, that he was crazy, but those who have been in Milan and who have seen the famous fountain of that city know that the fountain at the Exhibition grounds is an exact replica of that which stands there.

Situated on the wide shore of Lake Ontario, the natural open spaces have been preserved and improved. Green lawns, shady trees, cool fountains, and a great park offer themselves for the delight and comfort of the visitors. Then, sét in the heart of these spacious grounds are eighty buildings that command admiration from an architectural standpoint, buildings that are beautiful because of their majestic permanency, buildings that hold the exploitation of the national resources of a rapidly growing nation; the representations of what Canada, individually and as a whole, has done in art, industry, science and agriculture; a summary of national achievement in practically every line of endeavor. The productions of western forests, of eastern seas, of farm and factory, of studio and office, of nature’s resourcefulness and man’s intelligence, are all displayed, while humanity, gathered from all corners of the earth for this gigantic spectacle, feast their eyes, gladden their hearts and broaden their minds amidst it, absorbing the while for Canada’s good, the educational benefits—industry, thrift, prosperity.

In 1879 when Canada, as a Dominion, was twelve years old, Toronto first decided to replace the perambulating agricultural fairs that came to the city every three years. Since then the Canadian National Exhibition, the result of that decision, has been winning the hearts of strangers, strengthening the bond of national pride and international friendship. To-day, it is the most colossal thing of its kind in the world, unequalled by any other annual fair.

As in the days of old, the merchants gather, with their goods, the scientists with their discoveries, the farmers with their produce, to combine business with pleasure. Toronto, “the place of meeting,” is, during exhibition time, a rendezvous for men of letters, of art, of music, from the four corners of the earth. Professional and industrial men, from all nations, gather with tales and representations of their progress. The eyes of the world at that time are on Canada. This mammoth undertaking has taken years of planning, and the result is a perfect visualization of what the resourcefulness, the enthusiasm, the. loyalty of Canadians have given Canada—prosperity, progress, achievement. It is a representation of what Ganada has done in the past and an optimistic glimpse of what our rapidly rising nation may do in the future.

Then for the hour of enjoyment. There are boat and auto races, horseshows, vaudeville shows, athletics of every description, a hippodrome, aquatic spectacles and any other form of amusement ever thought of. Down the mid-way there áre thrillers of every description—hair-raising surprises, heart-thumping dips, inventions that fling age and youth together in a riot of untrammeled joy. Every afternoon and evening a pageant is staged before the grandstand. On a stage 800 feet long with a scenic setting of natural beauty, from 1,200 to 1,500 performers present a spectacle of almost barbaric splendor. ’

During the years of the war and those following it these spectacles had to do with military events. More than a year ago, it was decided to change from the war productions to an Egyptian scene—Anthony and Cleopatra. Since then, the world-stirring developments in the land of the Pharaohs have been an inspiration to those engaged in the work of production and those actually taking part in it, so that this year’s pageant should be one of the greatest and most successful triumphs that has yet been held. In addition to this in the evenings, the greatest bands in the world are to be heard, grand opera, massive choirs, community songs with

25.000 voices each night, and many other attractive features.

Every day is a happy day at the Exhibition, but/there is one that is perhaps a little happier than any other—Children’s Day.. -

Last year the tiny son of an Italian news-vendor dashed wildly into his mother’s small corner news-stand. The morning. papers that he should have been selling at the street comer at the moment were in a dishevelled heap on _ the pavement. He waved a neatly typed envelope in the air addressed to himself. His face was radiant as he tore it open. “A letter for me, Ma,” he gasped. ‘T fought de postie was jes’ foolin’ whin he said dere was. But, no sir, he warn’t. What’s it say, Ma? What’s it say?” and the lady’s eyes were wide and sparkling as he handed a brown invitation card to the poorly-dressed woman behind the counter. “Gee, a free ticket to the Ex.! How’s dat Ma? How’d dey know me? For a whole day? Oh! Gosh! Gimme it!” : . . . well, here’s the “inside” story:

The price of admission to children on their own day had always been five cents; though most of them could afford that amount, there were hundreds each year who could not. John G. Kent, managing director of' the Exhibition Association, a lover of children and a patriotic Canadian, saw where he could save thousands of youngsters from disappointment and render his country a service at the same time. He did it by issuing-

700.000 free tickets to children through the schools in all parts of Canada every year, and it has proved to be one of the greatest Canadianization movements that has ever been attempted. Many of the children of the" public schools are foreigners. A day at the Exhibition in the different buildings, among the thousands of displays of Canada’s industries, professional and art achievements, gives them a greater and broader idea of Canada and her resourcefulness and progress, than they could ever attain through text books and blackboard-demonstrations. Such real, vivid, striking pictures do not leave young minds unimpressed or fail to stir within little hearts a certain pride and hope of possession. So the seed of good Caftadianism is sown—sown on virgin soil.

But it is not only the children who get most enjoyment out of the Exhibition. Last year’s paid attendance was 1,372,500 adults. They came from all parts of the continent and from overseas. The daily average for the thirteen days .of the Exhibition was 106,000, double that of any of the state fairs in the United States and a record unsurpassed by any World's fair of the past in the same number of consecutive days.

Our Canadian National Exhibition has won a distinctive place in -Canadian life. It has won its way, during its forty-five years of traditional representation and faithful records of new progress, to the hearts of the Canadian people. It has won their love and loyalty justas it has won the admiration of the thousands who come from all over the world each year to visit it. It is a true and incomparable picture of Canada, her resources, her people, her capabilities and achievements—a complete expression of her national character. 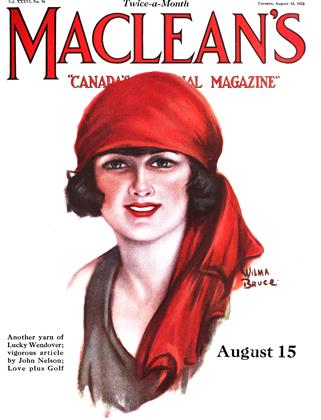