lady in a big fur coat as she paused, breathless and inquiringly, at my open door, "aren’t those stairs dreadful, and is this Room Seventeen?”

“Yes,” I smiled to both questions. (I had heard them before.)

“You are Miss Thompson?” she continued, “I am Dorothy’s mother.”

“Now which of the six Dorothy’s in my room do you resemble?”

“Oh, yes,” once more, and aloud, as I noticed a certain something about her eyes,”

“you are Mrs. Passmore.”

“I just came,” she explained, taking the first available chair,

“to talk over Doro-

thy’s report. How lovely your flowers are. Do you care for them altogether yourself?”

“Oh, no,” I confessed, “the monitors look after them most of the time, but we all like them. I always look at them when I feel cross and they help to calm my troubled spirits.”

“Do you think the children notice them particularly?”

“Yes, I do, at least they tell me how bare the room looks when, before holidays, we send them away to be cared for.”

Children’s love of the beautiful depends very largely on their home environment. In this connection, I recall one small boy who had decided views of his own. It was in a primary room. The teacher had placed a collection of beautiful pottery on a low table and the little tots looked them over and expressed their opinion as to which was “prettiest.” One sturdy chap surveyed them in silence for a few minutes, then with hands on hips and a lofty air of scorn passed on saying: “There ain’t one of them suits me.”

“I could quite see how little girls might like such things,” Mrs. Passmore agreed, “but do the boys?”

year, and they were not meek i i t tie fellows either. One day they overheard me speak of planting some slips and they volunteered to do it for me. am afraid a gardener would have been horrified at our methods and can’t say that the results were exceedingly gratifying as far as the plants were concerned, but we had some wonderful conversations dur-

ing the process. We got much better acquainted in

a few minutes of flower planting than in weeks of school. I would recommend this method to any father who can’t understand his boys. If he would ask his help and advice in doing some—well, say

'T'HIS is the first of a series of six -L articles under the general heading: “Seeing the Teacherby Miss Pansy Atkins, a teacher at one of the leading public schools in Ontario. Miss Atkins is a strong believer in the “Home and School Clubs,’’ and in close co-operation between parent and teacher. It is for the furtherance of her beliefs in this regard that she has consented to prepare this series for MACLEA N’S, which will appear in this and the five succeeding issues, in the Woman'} Department.

gardening—he would be surprised to find how soon they would become intimate friends.” ‘‘But what good came of j,t at last?” demanded this practical lady.

“Well, in this case we talked of plants, trees, and then Indian lore and Don told me in a most interesting way of his experiences up north when he and his Dad had gone on a trip in the wilds. Then he told me of trees and the kinds he knew and finally he offered to give a talk to the class on lumber and lumbering. He held them spell-bound as he talked of skidways and cant-hooks and drew illustrations on the board to make his explanations clearer. He usually stood rather low in his class work, but here was one thing he could do well and that gave him self-confidence.”

adapted a place to try to teach him everything equally well. And if we could only encourage children to develop the talents they have instead of emphasizing what they haven’t, we would make better progress. This boy told me later that he spent his Christmas money as part payment on, “The Drama of Our Great Forests.” Some day he may become Minister of Forests and Mines.

And then we spread Dorothy’s report on the desk to have one more look at it. It certainly was discouraging to say the least. Arithmetic!

“I don’t know what is wrong,” her mother sighed, “she seems so downhearted about it. But she never was any good in arithmetic. I think she takes that from her father—however, he does seem to be a pretty good lawyer.”

I am afraid the root of the trouble lies right there. A child gets the idea that he is “bad” in some particular subject and it would take a derrick to lift him from his “slough of despond.” _ At the beginning of our problem examination the other day, a girl, who is quite clever enough to do any of her work, came up tome with a dismal sigh and said: “I just know I am not going to do well in this exam; mother

says I never was any good in problems and I never will be.”

And what could a mere teacher do in the face of that? If there be any value in sub-conscious mind influence in working p r o b1ems, and there is, that child certainly w o u 1 d not do well. Wouldn't Dr. Coué hold up his hands in despair at a remark like that!

Mothers, don't —please don’t— tell your children they are poor in

some subject and continually remind them of it. If so they will justify your gloomiest predictions. Instead, take one little thing and help them with it; boost them over the hard places and then do it again. There is nothing succeeds like success, and when you see the joyously-beaming smile when they get it right and the alacrity with which they attack the next step you will be amply rewarded. Tell them then that they are getting along famously and watch them try.

THIS reminds me of a boy I had in my class one year whose standing was always at low-water mark. He was bright and very loveable, but jumped to any con. elusion with great speed, but little accuracy. Any number in a question would do for anything and he apparently didn’t trouble himself with the few trifling words of explanation thrown in. One day he brought a troublesome question to me and after a few suggestions, daylight dawned, or rather burst upon his mind,—he saw how to do it. He bounded to the first empty seat and grabbing a pen began to write. Just to hear his response I reminded him that he sat in the fifth row.

“Oh, but Miss Thompson,” he replied in an excited tone, “the important thing just now is to get this question down.”

I agreed with him.

After that he became more methodical and improved accordingly.

I often think of a teacher whom I heard talking of an Art Lesson she had given one day. As she walked up and down the aisles at the close of the period she groaned inwardly—it was awful. The results reminded her of what one of the “Group of Seven” might paint and label “Tree on Hill Side.” Her wrath rose and just as it was about to break forth in a storm she suddenly thought: “Well,

perhaps they too are struggling for the expression of something—they don’t exactly know what”—so she said: “Your work is fine, children, you have tried beautifully.” And as she prayed for forgiveness she thought: “Well, they look happy anyway, so what’s the difference?” But to return to Dorothy’s mother. “Do you know?” Mrs. Passmore said thoughtfully, “I have noticed that Dorothy will do more for one word of encouragement than all the scoldings I can give.”

“I wish the father of that girl you saw doing the board felt that way,” I said.

She was naturally slow but very willing j and did try her best, and how I longed to | mention the one field he had omitted, but I didn’t; instead I told him I was sure she needed a little encouragement more than anything else. I rather felt by the tone of the note that it wasn’t always sunshine at home for Mary.

How Much it Helps’

IF PARENTS only realized how much home encouragement helps at school. A girl brought up to me her homework book and showed, with great pride, how beautifully neat it was. When I expressed great approval she said with a dear little smile:

“Mother says she will give me a dollar if I keep it nice right to the end.”

I’m sure I could not have refrained from hugging her mother if she had been there at that moment.

One of the worst of incorrigibles that I ever had remained, by almost superhuman effort on her part, in the good conduct row for a whole month, largely because her mother promised her a bicycle if she did. After that she seemed to have formed the habit of industry and never quite returned to her former shiftless ways. Also she became rather proud of herself in her new role. She calmly informed me one day that, “in the other school I didn’t do a bit of work and I didn’t pass, and none of the girls who paid any attention to me I passed either, and those who didn’t did.” We had a rather lengthy conversation 1 on the matter right then.

Discretion must be used in giving en¡ couragement, just as in giving charity.

is for the sick a doctor is called, not for well. I have seen boys who, when praised, have stuck their little thúmbs, man wise, in their vests, and, leaning back their seats, with a sweetly satisfied have called it a day. Also one must refrain from unmerited praise. A child usually has pretty high ideals and if he is told something is “good” when he considers it “rotten” he at once will place you his mind as a mighty poor judge and if

you could hear him, after he gets outside he is probably saying: “Oh heck, she’s no good, that’s all she knows about it.”

“I shall certainly try,” Mrs. Passmore said as she rose to go. “Dorothy is such a good child, and we are very anxious to do our best for her.”

I saw the result of the “trying” before the year was out and I assure you it was well worth the effort. 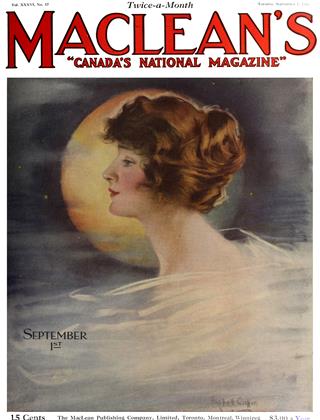