THESE be the days of dramatic world incidents. What, for instance, could be more pathetic yet more heroic, than a great nation, broken by the war, reeling under bankruptcy and internal disorganization, struggling and striving and saving until she had cleared away the debris of her ruins and rebuilt not only her material household but the mansion of her selfrespect.

That is what has been happening with Austria. Austria has done penance for the war-crime into which Germany drew her. Austria has convinced the ruling nations of the world that she is repentant, that she only wanted a chance to reestablish herself as a worker and producer in a new world of peaceful occupations. Her sincerity has been so apparent that she secured the loans she begged for. She has gone zealously at the work of redeeming herself, and, it seems, her feet have at last found the firm highway that must eventually lead to prosperity and contentment.

The story of Austria’s self-transformation, which might well be held as an example to unrepentant and disorganized Germany, is partially told by William A. Du Puy in the Neu1 ork Times Magazine.

It was in the summer of 1922 that Austria was at her worst. The empire had gone to pieces three years earlier. Vienna found itself the centre of a new little country of one-sixth the population of the former empire. After the war every frontier was a barrier to travel and trade. The crossroads city of Central Europe found its currents of commerce gone. The new Austria did not grow the food with which to feed itself, did not produce the coal with which to warm itself. One inheritance came to it, the officials of the entire empire. Austria found itself with more government employees on its rolls than had been on that of the empire. They had scurried to the capital when the crisis came. If they were discharged, they would starve or start revolutions. Austria did not know how to meet so many problems.

For three years she used up every available board, borrowed every possible cent, printed all the paper money that anybody would take at any price. Then she was at the end of her road. Seipel, the priest, was made premier. His job was to get outside help. He went to Italy, Czecho Slovakia, Germany, France, England, virtually offering Austria to the highest bidder. But nobody would bid. Everybody had troubles of his own. Seipel’s final appeal was to the council of ambassadors sitting in London. He wanted a loan. There as elsewhere it was refused. Everybody told him that they could not loan money to a nation that might not exist when the debt fell due. Lloyd George, speaking for the council of ambassadors, held out the only hope. Maybe, he said, the league of nations could work out some scheme. What has since happened is a result of that suggestion.

The salvaging of Austria has been worked out by a special committee working under the financial section of the league of nations. There were powerful men on it—Balfour of Great Britain, Hanotaux of France, Imperialli of Italy, Benes of Czechoslovakia, Seipel of Austria. They figured out a long series of seemingly impossible accomplishments that must be preliminary to the extension of a loan to Austria. If all these hurdles could be taken Austria could be made worthy of credit. Let us take a look at this course a bankrupt nation must travel to solvency.

In the first place, the continued existence of Austria as a nation must be assured. Would the nations around her agree to respect her political and commercial integrity? They were induced actually to sign a covenant to that effect. Austria should remain Austria.

With her integrity assured, what had Austria to offer as security for a loan? Her customs and tobacco monopoly, she replied. They were ample to cover interest and amortization on the money she wanted. They were if Austria got on her feet, was the reply, but not if she were not able to become self-sustaining, to so organize her government as to accomplish that much-discussed end. a balanced budget.

Austria would go to any extreme in reform. The league committee should write the prescription. She would take the medicine.

“You have 300,000 persons on your payroll.” said the committee. “Discharge

25.000 dismissals. They could not all be let go at once. At the end of two years this end should be accomplished. Austria began at once. In April she had dispensed with the services of 35,000. the proportionate number for the length of time that had passed. Austria should stop printing money. A new bank should be created, the Austrian National bank. It alone should have the authority to issue money. It should issue that money only when there was gold or collateral'back of it. The money should be redeemable at the bank. This was done. Hidden wealth poured into this bank. It became rich, secure. It had twice the reserve back of its currency that was required by law.

Austria should begin progressively so to adjust her revenue laws as to bring her income steadily up. At the end of two years her income must be 350,000,000 gold kronen. She began making the necessary laws. One of the first of them was a sales tax. Every article sold by every merchant must pay a tax of one per cent. This tax is a good revenue producer.

Austria must enact this entire program into law. Her parliament met and did the whole job in a few weeks. She had to have the money. Parliaments are cumbersome and slow. Would it not be possible to devise some other agency with authority to pass laws more expeditiously? The extraordinary Cabinet council was created by constitutional enactment made up of members of the government and repressentatives of the different parties. It could make laws where it seemed necessary. The committee from the league of nations could call upon it when it thought haste was necessary. It has passed some of the most important of the legislation as, for instance, the sales tax.

But even with these reforms under way, the Austrian committee did not think that securities guaranteed by customs and tobacco taxes alone would sell in the markets of the world, a loan just be made iron-clad in its security. Would not some of the friendly nations step forward and go on Austria’s note? Would they not guarantee the payment of the loan that was proposed in her behalf? They would. Great Britain, France, Italy, Czecho Slovakia, each agreed to guarantee 20 per cent. Other nations made up the remainder. If the customs and tobacco taxes did not meet the situation they would make good. They endorsed her note at the bank. They actually deposited government securities in Swiss banks to back their pledges. But getting these governmental pledges was a stupendously difficult thing. Most of them required parliamentary sanction. The league committee kept pressing. It got them ail through. It created a joint committee of the guaranteeing nations to approve the detail of the loan.

This loan must be for 650,000,000 gold kronen, or about $200,000,000. It is figured that that amount is the difference between the revenue that Austria will have in the next two years from internal sources and the revenue she will need to meet her expenses. With that loan she will be stabilized for two years. At the end of the two years her budget will balance, she will be getting in enough tax money to pay her expenses. The tobacco and customs money will thereafter go toward paying off the loan. Already the revenue from those sources is bringing in three times as much as will be needed for that purpose.

From the minute the league committee went into Austria confidence began to take the place of desperation. It took six months to work out the details of the big loan but internal loans were immediately floated. Then a lesser external loan was allocated among the governments and sold. Austria began to have confidence in herself. She again saw the way toward becoming a self-reliant nation standing on her own feet. The people took heart. The fear of impending dismemberment and division among her neighbors was dispelled. Those who had advocated annexation to Germany became inarticulate. Austria’s position had grown more secure than Germany’s. 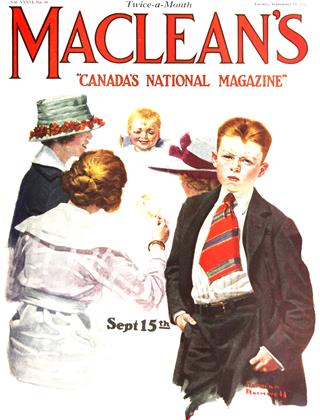