Question—O. C., Saskatchewan—You mentioned a Canadian woman living in the States who gives instruction in the care of the hair, so that her graduates learn a remunerative profession. Will you please give me her address. I think your Question Box is a wonderful thing.

Answer—Martha Harper, 516-522 Powers Block, Rochester, N. Y., is the name and address of the clever Canadian woman who originated the excellent system of shampoo and hair treatment that bears her name. Thank you for your appreciative comment—it is always encouraging.

Question—Nellie—I have always been interested in your answers to questions, and wonder if you would help me. I am an assistant in a small-town doctor’s office. Besides helping with patients, I also keep books, write letters, etc. It is not necessary, but would be very handy if I had a knowledge of shorthand. Can you advise me about taking a course? You see, I do not intend making stenography a life work, as I am more interested in nursing, but would like to know a system of shorthand I could learn quickly that would enable me to handle the doctor’s correspondence.

Answer—There is a very reliable, wellestablished chain of Correspondence and Commercial schools, with head office in Toronto. Enquiring of this school, I find the staff meets cases like yours by a correspondence course in Pitman that the pupil can complete in about six weeks, and that would give her sufficient working knowledge of shorthand to handle such correspondence as you have. The cost is $10, and I am of opinion that this would meet your case admirably.

you please tell me the name of the leading hospitals in Winnipeg?

Question—Mrs. E. G., Ontario: Will, you advise me how to get an education? I am a widow of thirty with a two-year old boy and no money. This is the first time in my life that I have really had a chance to even think of learning. I would like to get a good high-school training and later enter a training school for nurses. I would do any kind of work to pay expenses, but where cöuld I leave the baby?

Answer—As you are without means, I would not advise the lengthy programme you have outlined, for it would be some years before you could graduate as a nurse. If you have domestic qualifications, however, I would suggest that you obtain a post as housekeeper. Then, perhaps, you would be able to take the child with you. Why not try to get such a position in Toronto? Then you could attend the free night school twice a week and gradually improve your education, at the same time saving your money. In a year or eighteen months you would

probably be able to take a course in convalescent nursing, which is shorter than the regular one. I am sending you the address of a Montreal woman who conducts such classes for trained attendants for non-serious and convalescent cases.

Question—Mr. F., Quebec: I have

read Kirby’s novel, “Golden Dog.” Are there any more novels concerning this province or other provinces in Canada like the “Golden Dog”?

Answer—Here are a few books with the themes laid in various provinces: “The Clockmaker,” by Judge Haliburton, (“Sam Slick”) of Nova Scotia; “Glengarry School Days,” by Ralph Connor, dealing with Glengarry County, Ontario; “The Sky Pilot,” by the same author, laid in the Canadian West; “Doctor Luke of the Labrador,” by Norman Duncan; “The Prairie Wife” and “The Prairie Mother,” by Arthur Stringer; “The Seats of the Mighty,” by Sir Gilbert Parker, with Quebec as the scene of action.

Question—Mrs. E. G.: I should like to become a librarian. How long does it take? Would the course in Toronto fit me for a position in a reference library? I have a good knowledge of French, German, Latin, Spanish and English literature. I am a university graduate, with an M.A. Would my salary as a librarian make it worth while for me to give up a good position?

Answer—Had you sent me your address, you would have received an earlier reply. The two months’ course in Toronto beginning in September is filled for this year. Write to O. W. Carson, Director of Public Libraries, Parliament Buildings, Toronto, for full information. Your application for next year should be put in early. Your qualifications are unusual and you will probably have no difficulty in passing the Library School final examinations. The initial salary depends on the grade attained by the student. It varies from $1,000 to $1,200 a year, and increases sometimes to $1,650 per annum.

Answer—The announcements are sent out by the bride’s parents. They can be ready, addressed and stamped beforehand and mailed soon after the bridal couple depart on their honeymoon. They should be engraved on double sheets of plain, white, heavy paper and enclosed in an inner and outer envelope. When there are several persons at one address, such as two brothers, a mother, father and daughters, the sons should have separate announcements with each name written on the inner envelope, but the daughters can share the same announcements as the parents, having “The Misses Jones” inscribed under the name of their parents on the inner envelope. 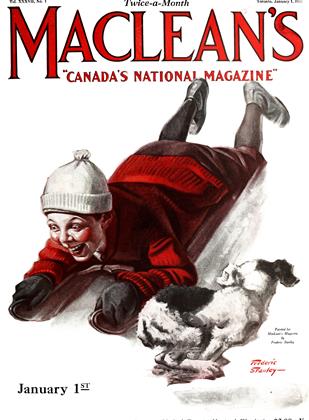